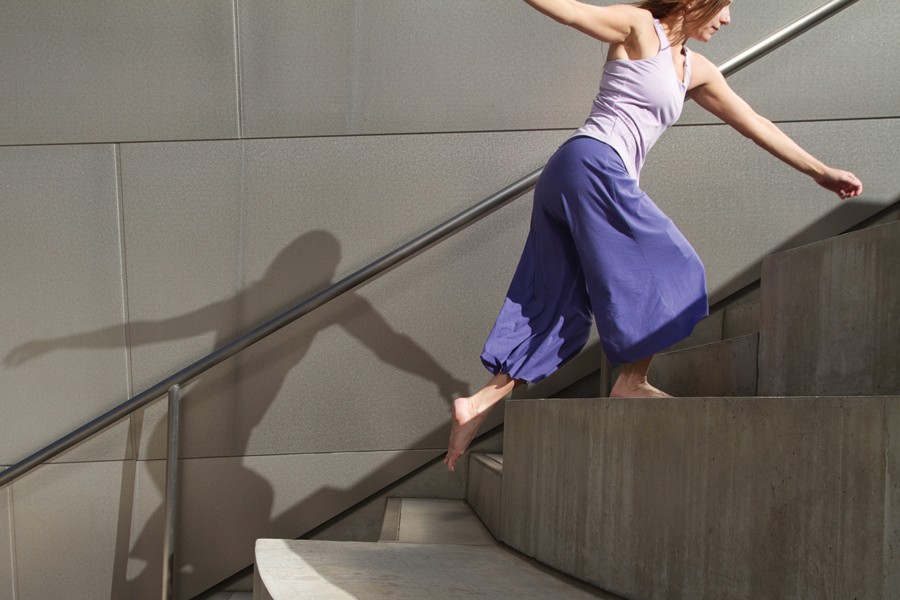 Image caption: Movement artist Heather Sultz looks at space and considers how people navigate it individually, how it affects them, how they use it.

"I look at spaces and think, What can I do with that?" Heather Sultz says by phone—and immediately laughs. She's only modestly joking that she sees architecture as her own personal dance floor. The Los Angeles-based choreographer, performer, and dance educator is the founder of Keyhole Residencies, a movement program that conducts workshops that teach people how to consider the spaces they inhabit in new and different ways. She's worked at the Frank Lloyd Wright-designed Fallingwater in Pennsylvania's Allegheny Mountains and at the National Museum of Wildlife Art in Jackson Hole, Wyo. This month she comes to Baltimore for a two-week artist's residency at Johns Hopkins' Evergreen Museum & Library for a pair of workshops and two performances, Nov. 9 and 10.

As the 11th annual House Guest in an artist in residence program that invites contemporary artists to interact with Evergreen and its collections, Sultz will create her performance specifically for the Bakst Theatre, and it will be partially informed by the life and times of Alice Warder Garrett and John Work Garrett, who bequeathed the Gilded Age mansion to the university. Such site-specific enterprises, for Sultz, are extrapolations of her dance background. "I find that as a movement artist I'm dealing with space all the time," she says. "I'm dealing with the space of my body, the space outside my body—that's what dancers do. And so it's not a really big leap from dealing with spatial concerns as a movement person to dealing with architectural concerns."

Her approach to space is in many ways the user-experience side of architecture. Whereas an architect looks at a building and envisions how it organizes groups of people and functions in a larger social environment, Sultz looks at space and considers how people navigate it individually, how it affects them, how they use it. It's a thought process informed by both visual impact and a site's history and function.

During her two-week stay at Evergreen, Sultz will hold auditions, form a company, and spend nine days collaborating with its members to create the performance. She's already done a wealth of homework looking into the mansion's former residents. "A lot of my research has been on the time period of the Garrett family and what their history was, how they used the site, who they were," Sultz says. "At this point, I think that the piece will have aspects of who the Garretts were and the period of time that they lived in. I'm looking at music that somehow ties into that for the piece."

For her company, Sultz is less interested in conventional dancers than in "people with an interest in the work and also able to perform, able to move." That creative versatility nicely complements the theater's original purpose. Mrs. Garrett met L&eacute;on Bakst, the set and costume designer for Sergei Diaghilev's famed Ballets Russes, in Paris in 1914. She commissioned Bakst to design the theater in the Evergreen home in 1922, and the colorful, intimate space opened its doors in May 1923 to a variety of dance, theatrical, and musical performances.

"It was a multifaceted space," says James Archer Abbott, the director and curator of Evergreen, who points out that the Garretts began inviting artists in residence to Evergreen in 1922. "The Garretts used it for the Musical Art Quartet, which was a professional ensemble that consisted of the faculty of what became [the] Juilliard [School], and they came to Evergreen every spring and every fall from 1922 to 1942. And they had dancers and singers perform, including Mrs. Garrett." But exactly what Sultz's performance might be remains elusive. She still has to go through the process. She has to assemble her company, conduct the workshops, and, most importantly, spend time in the space, to get to know its how's and why's. As she imparts to people in her workshops, places affect us—and we can affect them.

"I just did a workshop yesterday, and what I get a lot is, even if it's not a very interesting site for people, invariably at the end of the session people will say, 'Wow, I kind of like this space now,'" Sultz says. "And it's so exciting for me because the space hasn't changed—but their thought process has."