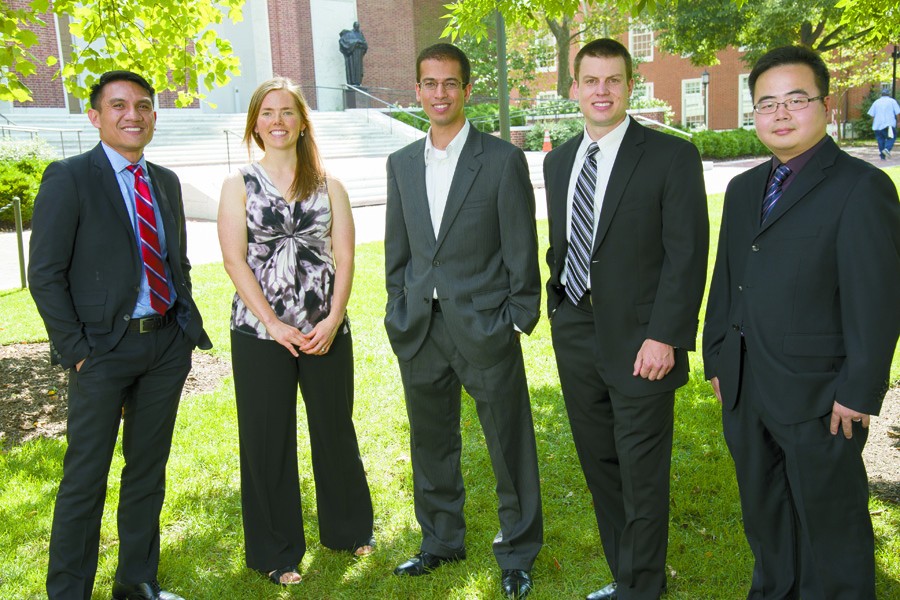 Five Johns Hopkins graduate students who are applying the latest advances in biology and technology to the prevention and treatment of health problems such as cancer, cardiac disorders, and sexually transmitted diseases have been named to the 2013 class of Siebel Scholars. The merit-based program provides $35,000 to each student for use in his or her final year of graduate studies.

The Johns Hopkins recipients, who expect to receive their doctoral degrees in May, were among 85 students selected this year from prominent graduate schools in the United States and China.

The Siebel Scholars program was founded in 2000 by the Siebel Foundation to recognize the most talented students at the world's leading graduate schools of business, computer science, and bioengineering. Today, nearly 800 Siebel Scholars are active in a program that nurtures leadership, academic achievement, and the collaborative search for solutions to the world's most pressing problems.

Siebel Scholars are chosen by the deans of their respective schools on the basis of outstanding academic achievement and demonstrated leadership. At Johns Hopkins, the program supports doctoral students in bioengineering studies. This year's recipients are pursuing their degrees in the Department of Biomedical Engineering, which is shared by the School of Medicine and the Whiting School of Engineering; and in two other Whiting School departments, Chemical and Biomolecular Engineering, and Electrical and Computer Engineering.

Under the supervision of Natalia Trayanova, a professor of biomedical engineering, Constantino uses computer models based on magnetic resonance images to understand how mechanical activity and electrical activity interact in the heart. He is trying to develop pacing strategies that are more effective in guiding the way a heart beats. He is listed as an inventor on a patent application for technology aimed at accomplishing this goal.

Ensign studies the nanostructure and function of the mucus barrier that protects the female reproductive tract. Her goal is to develop more-effective drug delivery systems for preventing sexually transmitted diseases. She is listed as an inventor on three patents that have been licensed to private industry. She works under the supervision of Justin Hanes, director of the Center for Nanomedicine, who has a joint appointment in Chemical and Biomolecular Engineering.

Working under David Gracias, an associate professor of chemical and biomolecular engineering, Jamal develops microscopic self-assembling tissue frameworks in order to grow cells into intricate three-dimensional shapes. He is investigating the role that geometry plays on cell behavior. Jamal is listed as a co-inventor on a patent application in connection with this research.

Under the supervision of John Goutsias, a professor of electrical and computer engineering, Jenkinson applies mathematical tools to help understand the processes that take place on complex networks. Examples of these processes include infections spreading through social contacts or molecular interactions inside the cell. This work could lead to a better understanding of how to curb an epidemic or how to develop more-efficient pharmaceuticals to fight diseases such as cancer.

Zhang has been developing new micro- and nanoscale molecular techniques to help diagnose cancer and infectious diseases. He is listed as an inventor on four patent applications, one of which has been licensed by a biotechnology company. He works under the supervision of Jeff Tza-Huei Wang, an associate professor of mechanical engineering, biomedical engineering, and oncology.

"This is a terrific honor for the school and for our outstanding graduate students," says Nick Jones, the Benjamin T. Rome Dean of the Whiting School. "The Siebel Scholars program expands our students' opportunities for entrepreneurship and collaboration and provides them with entry into a community of exceptionally talented future leaders."

In October, current and alumni Siebel Scholars met at the University of California, Berkeley, to debate the root causes of class conflict, social and economic trends fueling disparities in income and wealth, and the best approaches to solving the problem of class warfare. —Phil Sneiderman