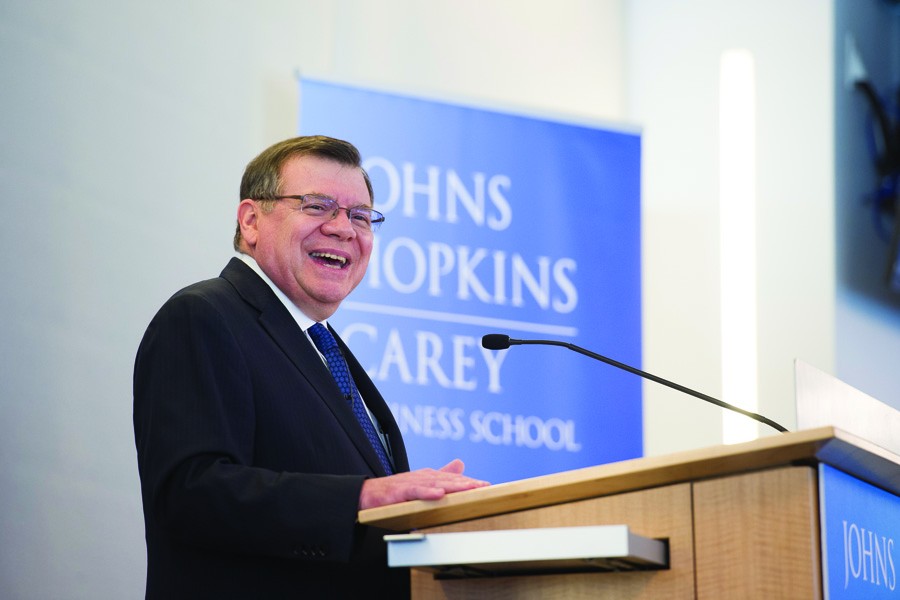 In his first major speech as the head of the Johns Hopkins Carey Business School, Bernard T. Ferrari announced that the school plans to focus its research and instruction on four troubled areas of the economy: health care, real estate and public infrastructure, the financial services industry, and the national security industry.

Ferrari, who became the school's dean in July, described these four problem-ridden areas as "major parts of the American economy that involve alarmingly large amounts of resources, to the extent where we continually question their productivity or their impact on society's well-being, or both."

Last spring, Carey announced that it was committing more of its research and instruction to the study of business problems related to health care and the life sciences, including an increase in cooperative endeavors with other divisions of Johns Hopkins, particularly its schools of Medicine, Public Health, Nursing, and Engineering. During his remarks at the business school's campus in Harbor East, Ferrari restated this commitment. In addition, he pointed to work already being done by Carey's long-standing graduate program in real estate.

"Improving the efficiency and effectiveness of the financial services and national security industries is next on our list," he said.

All four areas, he said, have produced "examples of business decisions that led to an exorbitant cost in economic and social terms" in the United States and around the world, as evidenced by rising health care costs, unsteady financial markets, concerns about the security of everyday necessities such as food and drinking water, and crumbling roads and bridges.

"As these problems grow more international in scope, they become more complex and more difficult to address," Ferrari said. "We cannot pretend that the giant moats bordering our country east and west can isolate us. These are the problems that will be of special interest to the Johns Hopkins Carey Business School."

The collaborative possibilities across the various divisions of the university will lead Carey students to "the creation of knowledge and new ideas" where traditional disciplines intersect, "and from these intersections come exciting new discoveries," the dean said. "It is among my chief objectives to see that the Carey Business School becomes an equal contributor to this university's great culture of discovery."

Ferrari delivered his address, titled "What's in It for 'We'? A Humanistic Approach to Business and Business Education," on Sept. 19 to an audience of about 250. President Ronald J. Daniels and other university leaders attended the event, along with Carey Business School faculty, students, board members, alumni, donors, and staff. The speech was also viewed on a live webcast.

Reaffirming the Carey School's "core belief in business that promotes both the bottom line and the well-being of society," Ferrari said that business leaders must be able to navigate both the for-profit and nonprofit sectors in any setting worldwide. Fixating on any one area of endeavor will not suffice in today's complex, interconnected global economy, he added.

Adaptability is also an essential trait for the businessperson working within this highly changeable environment. "It dictates that we not only do our best in ensuring a level of current mastery but also in providing our students with the ability to adjust their thinking in light of new knowledge," the dean said. "We must prepare them for professional lives that will take them places neither we nor they can predict today."