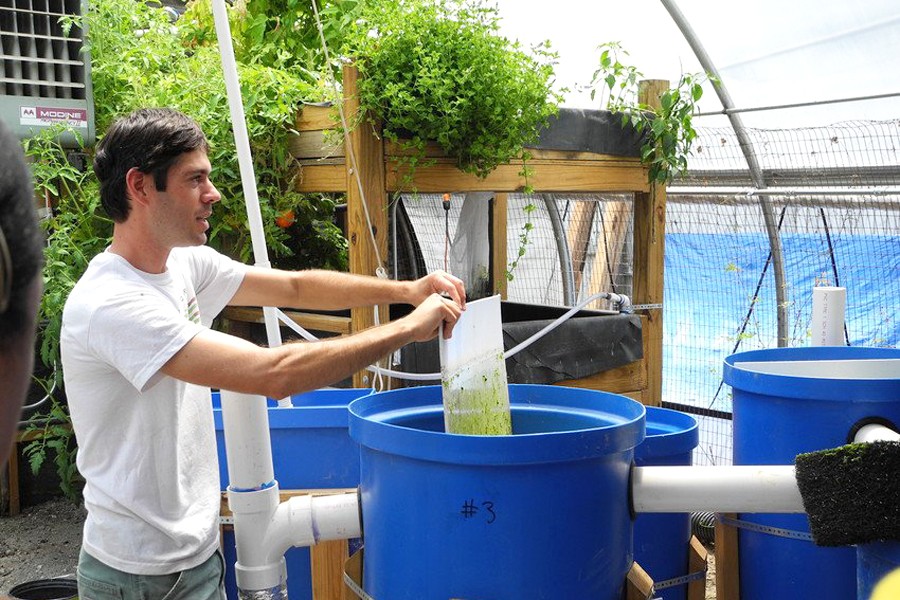 Image caption: David Love, of the Center for a Livable Future, at Cylburn Arboretum, home of the Aquaponics Project.

The Johns Hopkins Center for a Livable Future formally launched its new Aquaponics Project at Baltimore's Cylburn Arboretum with a grand opening ceremony held in October.

The Aquaponics Project is raising about 400 tilapia and producing several hundred pounds of organic produce, all within a 1,200-square-foot greenhouse. The fish and produce are expected to be sold at local farmers markets and through area fish markets. Surplus output will be donated to local emergency food providers.

The Center for a Livable Future developed this plan to demonstrate the potential of recirculating aquaculture for water-efficient and ecologically sound fish production. The project fits into CLF's larger goals of highlighting potentially sustainable alternatives to our dominant methods of food production and could become a model for local entrepreneurs and backyard hobbyists.

Aquaponics combines aquaculture (fish farming) and hydroponics (soil-less plant production), a process in which the fish waste becomes fertilizer for the growing plants. The system produces two income streams: from fish and from vegetables/greens.

CLF renovated an unused greenhouse at Cylburn, temporarily donated by Baltimore City's Department of Recreation and Parks, and outfitted it with two 150-square-foot hydroponic grow beds and four 210-gallon fish tanks. Tilapia were introduced into the tanks in June and are expected to begin reaching market weight by January. The grow beds are producing a variety of vegetables and herbs, including lettuce, kale, celery, basil, eggplant, and okra.

The project is open to the public on Wednesdays from 10 a.m. to noon, or by appointment (contact farm manager Laura Genello at lgenello@jhsph.edu).