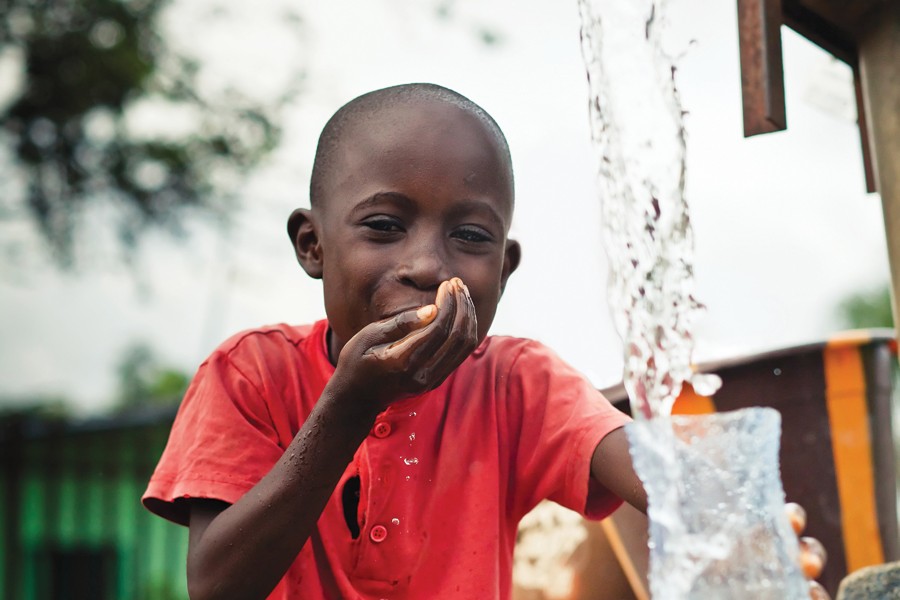 At the turn of the 20th century, cholera, typhoid fever and other waterborne diseases killed thousands of U.S. residents annually. The main culprit: drinking water.

In the 1920s, Abel Wolman, a Johns Hopkins School of Engineering graduate who was working in the Maryland Health Department, developed the modern process for chlorinating drinking water to kill harmful bacteria. Later, as a Johns Hopkins faculty member, he would oversee the planning and construction of modern municipal and national water supplies, set bacterial standards for drinking water, and advise 50 foreign countries on safe water processes.

What had been a huge source of deaths dropped to nearly nothing after the methods of Abel Wolman were introduced. Over the decades, he might have saved millions.

Since its founding, Johns Hopkins has dedicated itself to the promotion of discoveries such as Wolman's to improve the health of people throughout the world.

The university has recently taken steps to ensure that this philosophy will not only continue but be reinforced.

Last year, President Ronald J. Daniels convened a committee composed of faculty from the Johns Hopkins Center for Global Health and members of the Johns Hopkins Technology Transfer advisory board to examine current university policies in promoting and accelerating the use and dissemination of new technologies to improve the lives of individuals throughout the world, particularly in areas where financial resources may be limited.

The committee was the result, in part, of student lobbying efforts to ensure that new discoveries are made available in developing countries, even if licensed to outside parties. Historically, however, many health-related innovations by faculty and students have not required patent protection and remain in the public domain.

The Dissemination of Discoveries to Advance Global Health Committee recently released an executive summary and a set of 10 recommendations intended to enhance rapid dissemination of technological innovations that can improve global health.

To craft the recommendations, the eight-member committee, chaired by Thomas Quinn, director of the Center for Global Health, met throughout the 2011-12 academic year and conducted a thorough review of the policies, history, and annual reports of the university's Office of Technology Transfer.

Founded in 2001, Johns Hopkins Technology Transfer is the university's intellectual property administration center, serving Johns Hopkins researchers and inventors as a licensing, patent, and technology commercialization office and acting as an active liaison to parties interested in leveraging JHU research or materials for academic or corporate endeavors.

Quinn says that the committee found that Johns Hopkins University has demonstrated a century-long commitment to the pursuit of knowledge and science to improve the health of people worldwide. In fact, the committee did not find any significant impairment in global access to new discoveries, especially for people living in the developing world.

"Johns Hopkins always had this mission, of making sure we did the best we could with our knowledge and share it with the rest of the world," Quinn says. "The purpose of our group was to make sure we were on the right track—and we are—but also [to make sure] that future discoveries that could benefit others would find their way to parts of the world where they are most needed."

Quinn notes that while health-related discovery dates back to the university's founding in 1876, the creation of the School of Public Health in 1916 ushered in a new age of health knowledge dissemination at JHU.

Johns Hopkins currently has the largest international health research and practice footprint of any university in the United States. Today, more than 800 projects led by more than 200 faculty operate in 199 countries.

The university has made fundamental contributions toward reducing the burden of the five major conditions that account for 70 percent of all childhood deaths globally: pneumonia, diarrhea, measles, malaria, and malnutrition.

Quinn points to the work of Robert Black, the Edgar Berman Professor and chair of the Department of International Health at the Johns Hopkins Bloomberg School of Public Health, who has worked to reduce worldwide child diarrheal deaths by conducting epidemiologic research on the interaction of infectious diseases and nutrition.

Black discovered that zinc could both treat and prevent diarrhea, an infectious disease that kills more than 1.3 million children each year and is the second-leading cause of death in children worldwide. His studies in Bangladesh, India, Peru, and Zanzibar also demonstrated that daily zinc supplementation significantly reduces the severity of pneumonia. His work led the World Health Organization and UNICEF to recommend the global use of zinc for treatment of diarrhea, an intervention that has now been implemented in 40 low-income countries.

Quinn says that the committee's recommendations were tailored to ensuring that discoveries like Black's would receive the widest dissemination possible.

In 2010, the university executed 104 new license and option agreements, 52 amendments to existing agreements, 206 confidentiality agreements, and 26 inter-institutional and other agreements. On average, 350 invention disclosures are issued at Johns Hopkins annually, predominantly from the schools of Medicine, Engineering, and Public Health.

Wes Blakeslee, director of the Office of Technology Transfer, says that many JHU health-related discoveries don't require licenses or patents since they are protocols or policies or involve already-patented items. He cites examples such as the implementation of insecticide-impregnated mosquito nets in malaria-stricken countries, and an antibiotic field guide developed by faculty at the Bloomberg School.

"So much of what we do is developed right here and delivered in person on the ground directly. We bring it right to the people in need without anyone in the middle," Blakeslee says. "That is certainly true for a lot of the work by researchers at the School of Public Health and those at Jhpiego. And I'm sure that type of work will continue."

The Johns Hopkins Office of Technology Transfer has been charged with implementing the recommendations in the report and monitoring progress on these issues. The report is available on the office's website, techtransfer.jhu.edu/about_us/humanitarian.