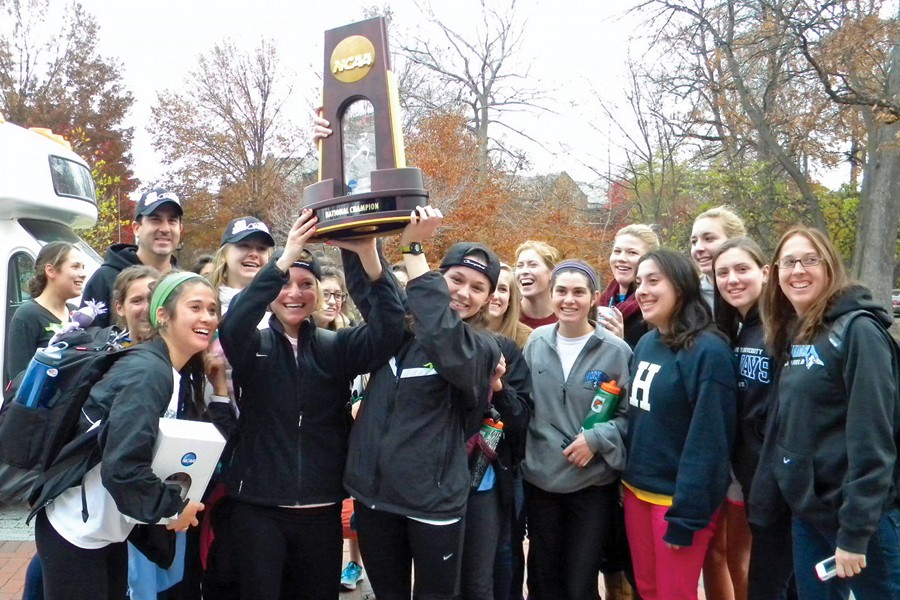 Van Allen wanted the team loose and relaxed. He recalled the national meet in Cleveland three years earlier, when his highly ranked team arrived physically prepared but perhaps a bit too anxious. The nerves, he says, could have been their undoing.

He wanted this 2012 squad to remember why they were here to begin with. They love to run.

"The message all week was to have fun. I wanted to keep the atmosphere light and not let emotions get the better of us," says Van Allen, a former Division I runner now in his 13th season at Johns Hopkins as head coach. "We preached it, and they responded."

The night before the race, the runners wrote personal motivational notes to each other, simple phrases tailored for the recipient, such as "You got this, stay strong" and "I believe in you."

Before the race, the Blue Jays smiled, danced, clapped, and hollered. They were told to have fun, and they did.

And then with light moods and gigantic hearts, the women's cross-country team collectively ran faster than everyone else on the LaVerne Gibson Championship Course on Saturday, Nov. 17. The Blue Jays totaled 153 points to capture the squad's first NCAA title. (The previous best at nationals was a seventh-place showing in 2010.)

They also ran right into the history books.

The title is the first women's national championship in any sport at Johns Hopkins, and the first Division III title in any varsity sport at JHU since the men's swimming team captured the third of three straight national crowns in 1979.

Speaking from an airport terminal in Charlotte, N.C., on the trip back home to Baltimore, Van Allen said that he was still overcome with emotion. "It feels awesome. Just indescribable. I'm so proud of this team and what they've done," said Van Allen, who four days later was named National Women's Coach of the Year.

The Blue Jays entered the nationals as the No. 2-ranked team in the country, just behind favored MIT. The team was led by freshman sensation Hannah Oneda, the Centennial Conference Runner of the Year, who won five races and broke several team records.

Weather conditions on the day of the race were ideal for running, sunny skies with temperatures in the low to mid-50s.

Junior co-captain Lara Shegoski called the weather a nice surprise, and described the team's high spirits just before the race as infectious. "We were joking and singing in the van on the way over, just acting goofy. That really helped."

Senior co-captain Annie Monagle said she recalls other big races in her life where she dreaded the start. For this race, however, she couldn't wait to run. "I was just excited. We were dancing off the line, clapping and cheering for each other."

Running in their blue jerseys, the Blue Jays advanced to the front of the pack from the outset. Oneda, junior Holly Clarke, and Monagle sat comfortably in the lead pack through the first mile, while Hopkins' three-through-seven runners were packed in the top-50.

Monagle says that the team was told to divide the race into halves. "The first part we set out to run with our heads, not go out too fast and run smart," she says. "The second part we ran with our hearts."

Monagle recalls holding a steady pace through the first 3k, and then with Shegoski at her side, picking off runners one by one, including some of MIT's top runners. She knew a title was within her reach.

Van Allen, who observed the live updated results on big boards along with the spectators, zigzagged the course to shout words of encouragement to his team. "I just told them to keep it up, and then on the back half I was, 'You got this. We're doing it.'"

The Blue Jays found that their previous experience on the Laverne Gibson Championship Course at the Pre-National Meet earlier in the season worked to their advantage, as each runner improved on her previous time, most noticeably Monagle, who passed nine runners to place 32nd in 21:56—49 seconds faster than her earlier time.

The team scoring was not secured until freshman Sophia Meehan crossed the finish line with a 22:37 time. Sophomore Ashley Murphy (22:38) and Shegoski (22:39) rounded out the top six to finish in the top-90 overall. Sophomore Frances Loeb also finished strong, placing 168th in 23:13.

JHU's winning margin of 63 points over second-place Wartburg College was the largest at the national championship in 10 years. Oneda, Clark, and Monagle all earned All-American honors.

When it became clear the Blue Jays had secured victory, Van Allen hugged his assistant coaches. The three quickly got lost in emotions, overwhelmed by what had just transpired.

Van Allen then left the coaches' bullpen to run to the finish line. Recalling his own track days, he hurdled fences and ropes to find his team.

"I just wanted to let them know they had won. I'm not sure they all realized right away. It was just crazy," he says.

Monagle says that toward the finish she had two phrases in her head: the word "fight," written in Sharpie on her left hand, and the note she received from a teammate the night before, "one last great kick."

For Monagle, this was her last cross-country race as a Blue Jay. She had overcome a host of injuries in her career to get to this point, including bone fractures and an ulcer. The previous obstacles made this victory all the sweeter, she says.

"I just blocked out the pain and hurtled toward the finish line. When I crossed, I think I blacked out for a second. Then I saw Hannah and Lara and we just yelled, 'We did it,' and the three of us hugged. Then we just went wild."

Monagle next found her father, who had been her high school coach.

"When I saw my dad, I just lost it," she says. "I was so happy my family could be there and celebrate with me."

Monagle says that the key to success was the overall team preparation and solidarity, through good times and bad. They had dedicated the race to a lost teammate, sophomore Rebecca Grande, a member of the women's track and field and cross-country teams who died on Sept. 30, just months after she was diagnosed with lymphoma.

"There's just been a positive team attitude all season. And the coach knew when to push us and have us take days off. He just pushed all the right buttons during training," Monagle says. "It's just so powerful when you're running for your teammates, not just yourself."

The women realized on the return to Baltimore that they had also been running for the entire university. In a show of school spirit, members of the football, men's lacrosse, women's lacrosse, basketball, and other teams met the cross-country runners as their bus pulled into the Homewood campus.

"We were so surprised. It was just icing on the cake," Monagle says. "I think there's a bond among all the students at Johns Hopkins; we know how tough it is and how hardworking you need to be, to be a student-athlete here."

Shegoski agrees. "It was just awesome to see all those people there on the front steps waiting for us," she says. "I couldn't believe it."

Tom Calder, athletic director at Johns Hopkins, says he received the news of the title win via text message while he was watching Johns Hopkins face Washington & Jefferson on Homewood Field in the first round of the NCAA Division III playoffs.

"I think I must have jumped 10 feet in the air. Just great news," he says.

Calder lauded the work of Van Allen and his runners on their historic win.

"It's something we always shoot for," he says. "This time we got it."

And had fun doing it. 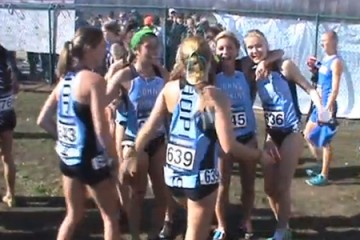 Highlights from the national championship meet