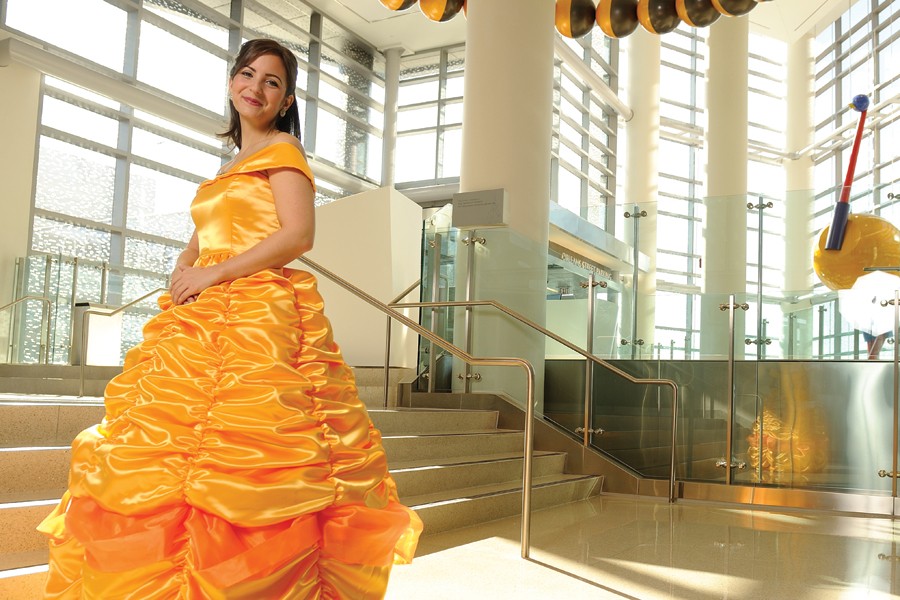 Mary Jo Holuba has performed at Carnegie Hall and the Paper Mill Playhouse, and in a touring production of Winnie the Pooh as (oh dear) Piglet.

None of these on-stage moments, however, quite compare to the instance when a sick child asks Holuba to hold her hand and sing "Beauty and the Beast" or "Someday My Prince Will Come" at her bedside.

If even for just a minute, the sprightly School of Nursing student with a vocal gift has the power to transport people to a magical realm.

Her smile alone can send you to Neverland.

Since age 14, the classically trained soprano has performed for children in hospitals and clinics, first in the New York metropolitan area and now in Maryland. She arrives in costume, often dressed as a fairytale princess.

The Saddle River, N.J., native, who had spent time as a 4-year-old visiting a hospitalized young relative, first volunteered her artistic talents at a children's hospital in Hackensack, where she enlisted friends to entertain children receiving treatments in the center's cancer and blood disorder wing. They gave dramatic readings of fairy tales, interspersed with songs popularized by Disney movies and Broadway musicals.

"I was doing a lot of community and high school theater at the time, and I just wanted to work more directly with hospitalized kids. I understood how even small acts could lift the spirits of these children and families who were in the same position I had been in," says the 23-year-old, who took up the violin at age 4 and later participated in the Young Artists Vocal Program at the Boston University Tanglewood Institute. "Some of these kids were receiving chemotherapy and could be sitting in a chair for hours. They deserved a nice distraction."

After losing her fellow performers due to their discomfort in the pediatric hospital setting, Holuba went solo with her princess shows and performed at New York-New Jersey area hospitals once a week all through high school, and periodically in college. She worked closely with a music therapist and learned from nurses who treated the whole patient, not just the disease.

Her performances range from interactive storytelling with large groups at hospital events to one-on-one songs in patient rooms.

"Sometimes parents will ask that I sing lullabies at the bedside while a patient is trying to fall asleep," says Holuba, who most recently volunteered at Baltimore's Dr. Bob's Place, a palliative-care home for terminally ill infants and children. "The music and fantasy brings comfort to not only the patient but often their families as well."

She knows about the value of comfort.

During Holuba's sophomore year of high school, her father was diagnosed with multiple myeloma and started to receive care at Memorial Sloan-Kettering Cancer Center in New York. The frequent visits to see her father, coupled with her volunteer experiences, would open her eyes to a career in nursing.

"The nurses at Sloan-Kettering were amazing, and so important to his care," she says.

Holuba enrolled at Barnard College of Columbia University and, determined to have her father witness her graduation, earned her degree in psychology in three years.

After commencement, she entered the Accelerated BSN program at Johns Hopkins and is currently in the Pediatric Primary Care Nurse Practitioner master's program.

In late 2010, Holuba recorded a CD called Simply Christmas, a collection of pop-jazz arrangements of holiday classics (Jingle Bells, Have Yourself a Merry Little Christmas, etc.) inspired by childhood memories. She intended the CD to be a Christmas gift to her parents, but the project quickly grew.

"The idea for recording came to my parents and me while I was home for a weekend giving my dad a bedside concert after his second of three stem cell transplants. His desire to have my voice recorded so that he may be comforted by my music when I was not home blossomed into this wonderful project with multiple professional musicians."

Holuba's father died just after the CD was released, but his legacy lives on in her music. The proceeds from Simply Christmas, which can be purchased on iTunes and amazon.com, benefit the Multiple Myeloma Research Foundation. Holuba says she hopes to continue to look for ways to fuse her passions for music and medicine, bringing a dose of cheer to families facing illness and despair.

"It isn't the big performances and record labels that make music inspiring, it is what you do with the music and whose lives you touch while sharing it," she says.