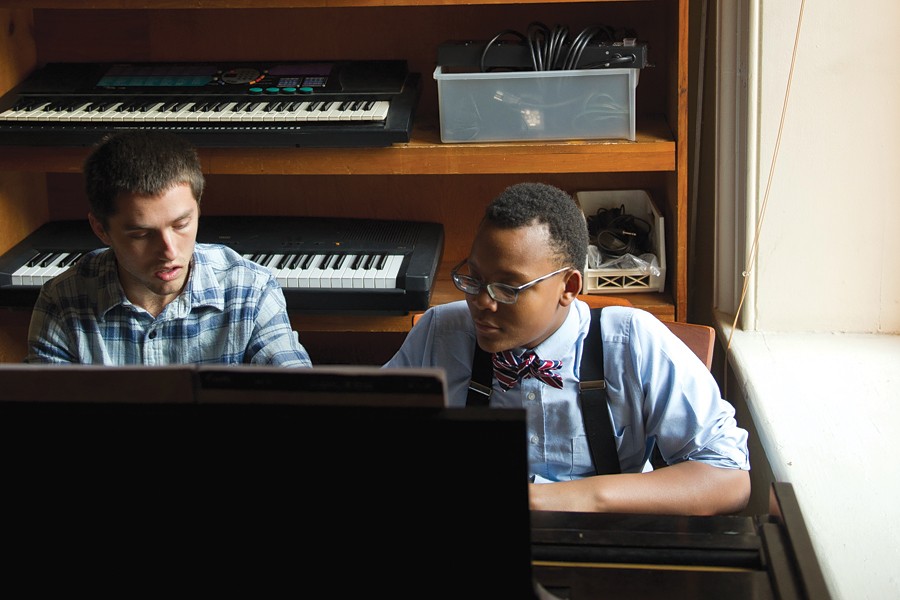 Robert Bacon can't decide what's off about his composition. He sits at a desk in a Peabody practice room, occasionally looking at the open laptop in front of him. Mostly, Bacon, an eighth-grader at the St. Ignatius Loyola Academy in midtown Baltimore, traces lines on the chalkboard behind him as his composing partner, Scott Lee, tries out Bacon's ideas on the piano.

Lee, a Peabody composition graduate student, is one of five teachers in the institute's Junior Bach program. Two afternoons a week, up to eight St. Ignatius middle school students walk the two blocks over to Peabody and meet with students there to compose pieces of music, which are performed by Peabody student musicians at an end-of-semester concert. Bacon and Lee's piece debuts Dec. 7, at 3:30 p.m. in the Cohen-Davison Family Theatre, and on this early November afternoon they're working on the middle section. At the semester's start Bacon decided he wanted to explore a variation of Tchaikovsky's 1812 Overture over a hip-hop beat—and score it for harpsichord. First Lee and Bacon talked hip-hop so they could develop a rhythmic foundation. Then they worked on the beginning and ending ("I'm a palindrome person," Bacon explains). Today they're working on how they get from start to finish.

At the piano Lee plays different variations of the overture's indelible theme, and Bacon suggests a retrograde of the line—playing it backward. Lee does it a few times, working it out until it sounds smooth, and Bacon, swiveling in his seat, immediately turns to face the piano. "I like that," Bacon says. "That sounds pretty cool."

Lee laughs. "That does make a lot of sense harmonically," he says of the line. He runs through it a few times, plays it sequentially with the measures leading into it, and then tries it with the beat, which is saved on the laptop.

This exchange isn't merely a peek inside Junior Bach's process, it's a microcosm of composition in general, according to program director Judah Adashi, who is a Composition and Music Theory faculty member at Peabody. "Part of what you're describing is not that different from any composition," he says. "It's a nebulous pursuit that way. There's this whole process from having an idea all the way to a concert, and you realize that other people are playing your music for an audience."

Launched in 2006 as a volunteer program by then Composition undergraduate Kevin Clark, Junior Bach became an accredited Peabody program in 2007 and has quietly become quite popular. St. Ignatius brings its entire student body over for the concerts, and students and teachers keep coming back—this is Lee and Bacon's second collaboration.

Since Adashi took over the program in 2011, he's been working on raising awareness, giving it a more robust online presence, and trying to spotlight the mutual benefits of the mentoring relationship. For many graduate students, being a mentor might be a first composition-teaching experience. And for the middle school students, creating music might not even enter the realm of the possible.

Junior Bach "gives the students an opportunity to express their emotions," says Julie Miller, St. Ignatius' assistant principal, who adds that it's one of the school's favorite programs. "And it gives them confidence going forward, [the ability to think,] 'I composed a piece of music; I can do this high school project.'"

Last year, Adashi started presenting Junior Bach composers with written copies of their scores at the end of the concert. "I hope that gets some of them thinking, 'This is something I'd like to continue doing,' " Adashi says. "The point is to give them creative agency. Some of them are coming with no musical knowledge at all—except what they like, which counts for a lot."

Back in the practice room Bacon is trying to figure out what he was looking for after they worked out the retrograde line. Lee runs through some ideas they'd tried before. "How do we get out of this?" Lee asks. "Do you want to fragment the bass line?" Bacon thinks for a second. "Let's leave the bass alone," he says. "Maybe repeat it? Repeating things isn't bad, right? I just don't want it to get boring. Let's try that once and see how it sounds?" 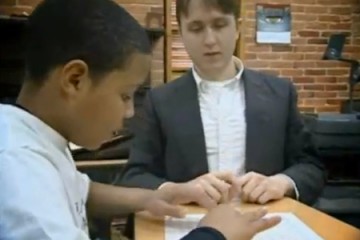