A World War II vet and former police executive, McGowan came out of retirement—at age 72—to join what is now the Division of Public Safety Leadership 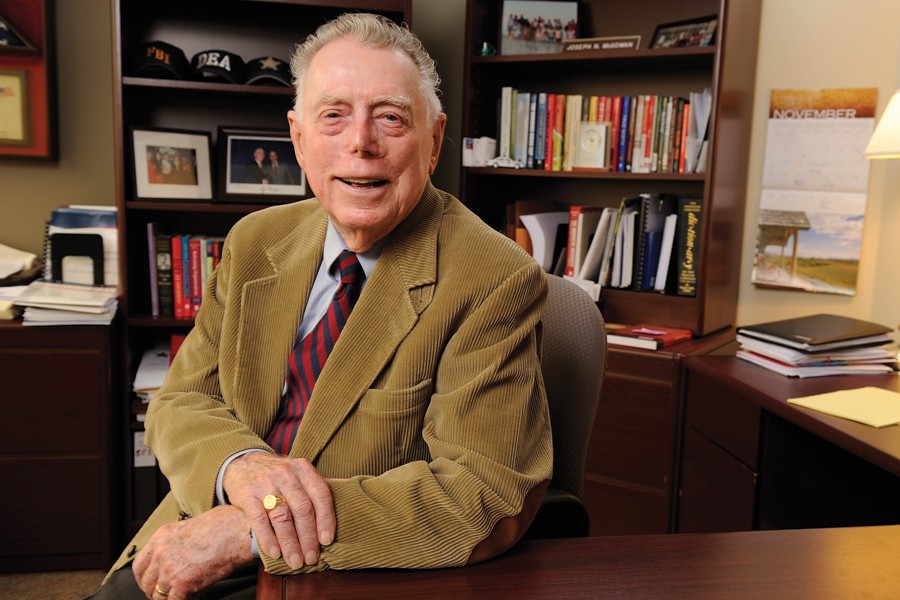 When Sheldon Greenberg was putting together a team to build a leadership program for public safety personnel, one of the first people he recruited was Joe McGowan. Greenberg didn't care that McGowan was 72 and had just retired for the second time. He knew that the former Baltimore County Police Department executive's wealth of experience would be instrumental in preparing future leaders for working on the front lines of public safety.

At the end of this month, after 13 years with what is now the School of Education's Division of Public Safety Leadership, McGowan is once again retiring, at age 86. Or is he?

"This time it's for real," he says. After more than six decades in a variety of careers, he wants to spend more time with his six children and 11 grandchildren and "fix up some things around the house."

According to Greenberg, associate dean, Division of Public Safety Leadership, McGowan's schedule and work ethic are as strong today as when he started in 1999. "He challenges me and everyone around him to be better and do more every day," he says. "If there's a job at hand, he will take the lead, draw you in, and wear you down until it gets done and done well. With Joe, good enough just won't do. He doesn't accept second best. At 86 years old, he has more energy and drive than most people half his age."

(Among the proofs of his energy: McGowan enrolled in PSL's Graduate Management Program at the age of 78, becoming one of the oldest students in JHU history.)

With his parents' blessing, because he was 17 at the time, McGowan enlisted in the Navy during World War II and served in the Pacific. After the war, he earned a bachelor's degree in economics from the Wharton School at the University of Pennsylvania. Following a series of construction jobs, he was hired by Bethlehem Steel, where he worked his way up into management. His responsibilities included labor relations, executive training, and public affairs. While working for one of the state's largest employers at the time, he also served nine years on the Baltimore County School Board, with four years as board president. He retired in 1988 after 31 years.

This first "retirement" didn't last long. One of his close contacts at the steel company was Cornelius J. "Neil" Behan, Baltimore County police chief. Behan was looking for someone to head an executive development initiative and offered the former steel executive the position. He subsequently became director of police academy training, retiring at age 72 after a decade of service.

It was around this time that Stanley Gabor, then dean of the Johns Hopkins School of Continuing Studies, was looking to establish leadership programs for police executives. To head the project, Gabor hired Greenberg, who then asked McGowan to get involved as director of federal programs. McGowan established relationships with a number of federal agencies including the Secret Service, the Immigrations and Customs Enforcement Agency, and the Drug Enforcement Administration. He also took charge of and expanded the highly effective Gettysburg Staff Ride. The program takes groups of 25 or more to the famous Civil War site in Pennsylvania and reconstructs many of the battles and the decisions leading up to them.

McGowan uses the site visit to point out the different leadership styles of the opposing generals. Robert E. Lee, the Southern leader, was a brilliant tactician who employed an authoritarian, top-down style. His counterpart, George Meade—who was appointed Northern commander just three days before the battle—was more of a consensus builder and included his subordinates in much of the decision making. The North was victorious at Gettysburg.

"By walking the battlefield and examining many of the decisions made, students get a better feel for what happens when communication breaks down or when someone doesn't follow orders or has their own agenda," McGowan says. "We then break the classes down into small groups and discuss applying these lessons to today's challenges. We ask how to fix the problems you're facing with no additional budget and no additional staff."

Those with whom McGowan has worked say that he will be truly missed. "He is regarded by the most influential people in American public safety as a guru, mentor, and friend," Greenberg says. "Directors of federal law enforcement agencies, chiefs of police, and leaders in academic institutions open their doors to him every chance they get to seek his counsel. They genuinely love him."