Jeff Aronson elected next chair of JHU Board of Trustees 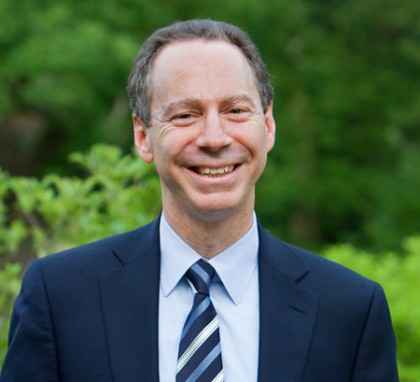 He's about to add yet another perspective: chair of the board of trustees.

Aronson, co-founder of a New York- and London-based investment firm, has been elected the board's 16th chair, starting July 1, 2013. The job will add significantly to his already heavy Johns Hopkins workload, but he embraces the commitment.

"Hopkins is special; I really believe it makes the world better," he says. The question that trustees help university President Ronald J. Daniels and the deans grapple with, he says, is, What else can we do to make the world better?

Part of the answer, he says, lies in Daniels' vision of "one Johns Hopkins," with more interaction, collaboration, and problem solving across divisional and disciplinary lines.

Aronson, 54, is a 1980 honors graduate of the university and father of two current undergraduates. Marni is a senior majoring in international studies and Spanish, and Nicole is a sophomore public health studies major.

"I spend a lot of time on Johns Hopkins business, and a lot of times my friends and colleagues ask me why I do it. It's a labor of love. I don't consider it work. I enjoy it," Aronson says.

Aronson is managing principal of Centerbridge Partners L.P., a private investment firm that manages $20 billion in capital. The firm focuses on private equity, distressed securities, and credit investments. Aronson earned a law degree in 1983 from New York University School of Law, where he is also a trustee. He began his career as a securities attorney before becoming an active investor.

Aronson will succeed Pamela P. Flaherty, the first woman board chair, who will complete her term at the end of the academic year. Flaherty will remain a trustee. Daniels applauded the board for identifying its next chair months in advance and says that he will work closely with Aronson and Flaherty to ensure a smooth transition.

"The university will be the great beneficiary of Jeff Aronson's ascension to the board chair," Daniels says. "I count Jeff as an extraordinarily valued friend and colleague. His service and commitment to Johns Hopkins are unquestioned. His love of the university runs deep, and he has devoted countless hours to advancing the institution."

Aronson's wife, Shari L. Aronson, serves on the Program in Social Policy Advisory Group in the Krieger School and is a trustee of Lehigh University and of the Jewish Museum in New York City. In addition to their Johns Hopkins daughters, the Aronsons have a son, Brian, who is a sophomore at Lehigh.