Three Johns Hopkins engineering students have won a $15,000 prize in a national sustainable development competition for adapting a traditional Korean paper-making technique to create an inexpensive way for impoverished villagers to produce paper for schools. 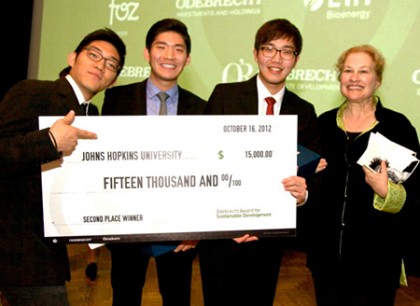 The prize was presented in Houston during a ceremony honoring the top submissions in the 2012 Odebrecht Award for Sustainable Development competition, which attracted 422 student entrants from 173 universities. The Johns Hopkins team's proposal won the $15,000 second prize, which will be shared among the students, their faculty adviser, and the school.

Sangkyun Cho, Jay Hyug Choi, and Victor Hyun Oh developed the plan last spring to fulfill a class assignment in a Whiting School of Engineering course called Introduction to Engineering for Sustainable Development, which is taught by Erica Schoenberger, a professor in Geography and Environmental Engineering.

"Everyone in class knew that this team had come up with such a neat idea, and the three students worked on it in great detail," says Schoenberger, who attended the award ceremony with the team members. "I think it's more and more the case that young engineers want to turn their talents and skills to improving the lives of the poor and the excluded. This team is a shining example of that trend."

The Johns Hopkins students focused on the lack of basic school supplies in developing nations such as Ethiopia, where more than 70 percent of the population is illiterate.

"Stationery supplies are simply too expensive for millions of families that live on less than $2 a day, and this is one of many socioeconomic factors that contribute to plummeting elementary school attendance rates and poor learning environments," the students wrote in their entry.

To remedy this, the students drew on their Korean heritage to modernize a traditional Korean paper-making process. The team prepared on paper a detailed design for a low-cost paper-making device that would require no electricity. The machine would grind up agricultural waste such as grain husks and mix the material with water that is boiled over a fire. The resulting pulp would be dried on racks to form paper.

The students now plan to build a prototype. If the machine works as conceived, they will look into working with a nonprofit group or private investors to try to move the low-tech invention into regions where school supplies are scarce. "These people have a very real need," Oh says. "While we love our idea, we hope that the project continues to move forward for their sake, not so much ours."