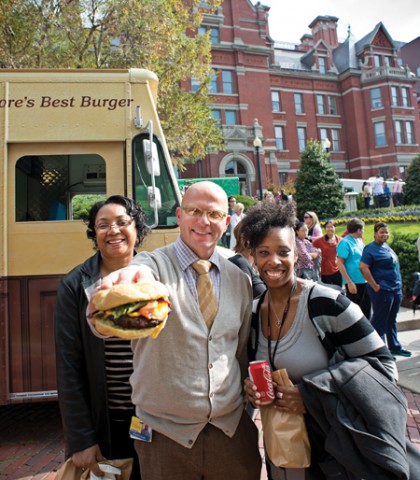 Image caption: Employees on the East Baltimore campus take a lunch break at Koopers Chowhound Burger Wagon, one of the participants in the inaugural Food Truck Frenzy, the first United Way event organized jointly by the JHU and JHM campaigns.

In the event's inaugural year, each truck made a donation to the campaign, and the Maryland Mobile Food Vendors Association made an additional donation, making the day's total contribution $3,150. An estimated 3,000-plus people waited patiently in long lines to make a purchase, and even though some menu items ran out, coordinators from each location say they received positive feedback.

The Food Truck Frenzy is the first United Way event organized jointly by the JHU and JHM campaigns.

In 2013, it could include additional locations and become a multiday event so that vendors can visit more than one campus.