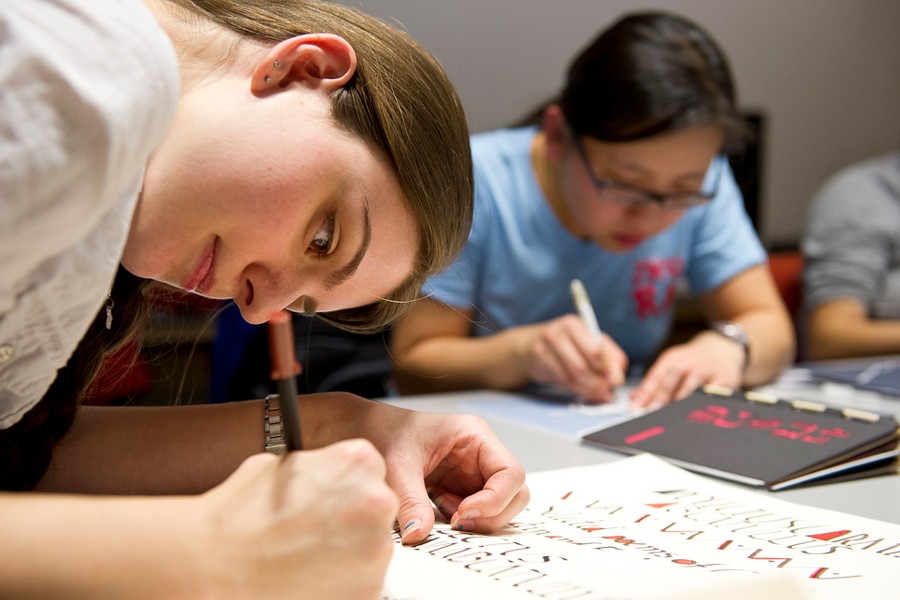 It is unusual for museum goers to be allowed—encouraged, even—to touch the artwork. But the Evergreen as Muse exhibit opening this month at Evergreen Museum & Library encourages just that. The exhibit features artist's books—conceptual works of art often employing tactile features such as elaborate cutouts, inclusions, and hand-wrought bindings—created by Johns Hopkins students in the fall 2012 course Artist in the Museum: Making Books. 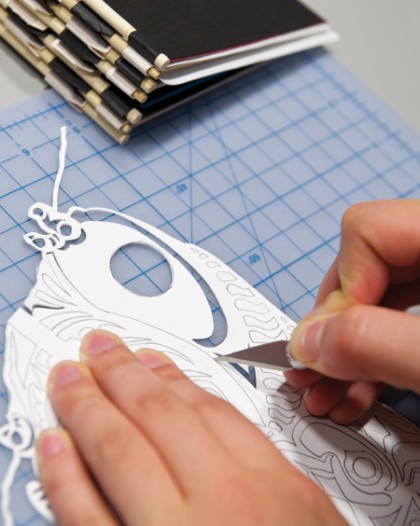 Image caption: Scarlett Hao, a senior premed student majoring in biology in the Krieger School, cuts out a stencil of her design of an owl in the Haida art style for her handmade book, which she says is to be an artistic and literary window into the Haida myth and belief culture.

"Some of these can be very powerful, some are very light, some can be whimsical," says James Archer Abbott, director and curator of Evergreen and a co-teacher of the course. "But the intent is really to have people think about books not just as a functional utilitarian tool but as truly beautiful objects to be cherished, to be held, to be interacted with."

This fall marked the fifth year for the course and accompanying exhibition, offered through a partnership of the Homewood Art Workshops and the Program in Museums and Society. The course, developed by photography instructor Phyllis Berger, was originally designed to introduce students to the Johns Hopkins museums. To create their projects, students draw inspiration from public and private book collections in Baltimore, including the university's John Work Garrett Library at Evergreen and George Peabody Library, the Walters Art Museum, and the private artist's book collection of Betty and Edgar Sweren.

"We have had numerous projects that were inspired by illustrations, from butterfly wings to anatomical drawings to etchings in poetry books," Berger says. This year, "we have a student who was inspired by our visit to Evergreen Museum & Library, and her project combined letters written by members of the Garrett family [who donated Evergreen House and its collections to the university] with interiors of the house, collaging in images of historical figures. Another student is photographing murals in [Baltimore's] Station North area, abstracting them as well as showing their relationship to their environment."

The course has always culminated in an exhibition at Evergreen showcasing student work. Over the past few years, they have created artist's books. "I could take the images from any student in my photography classes and organize them in a book," Berger says. "But making an artist's book goes beyond the basic skills of a well-composed and technically sound series of photographs. In this class, photography is the gateway to image making, but photographs may not be the end result. When we take students to see the many amazing book collections in Baltimore, they are inspired to try other mediums such as paper cutouts, photo collage, handmade pop-up books. There are no limits beyond their own imagination, and there are a myriad of forms their books could take. It is very exciting to watch this process."

Betty Sweren, a co-teacher of the course and a book artist herself (her work has been displayed at the Walters, the National Gallery of Art in Washington, D.C., and the Victoria and Albert Museum in London, among other institutions), explains that artist's books are creative concepts from start to finish. Students who enroll in the course come from a variety of academic backgrounds—engineering, premed, public health, applied math—but "everybody comes because they want to tell a story," Sweren says.

The exhibition, which runs from Dec. 7 through Jan. 27, will have an opening preview reception on Dec. 6 as part of An Ever Green Evening, the museum's annual holiday open house. For event information, go to museums.jhu.edu/calendar.php.