Bill Tiefenwerth, founding director of Homewood's Center for Social Concern, will step down in December after more than three decades at JHU 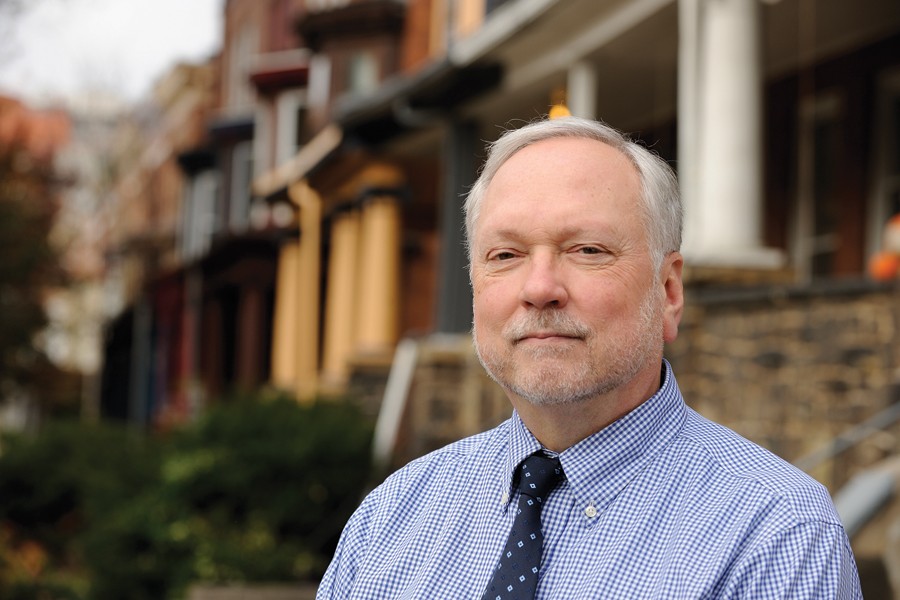 After 31 years connecting the people of Johns Hopkins with the people of Baltimore City, Bill Tiefenwerth, director of the university's Center for Social Concern, will retire at the end of 2012. On his watch, through the Hopkins Tutorial Project and dozens of other student-driven initiatives, nearly 30,000 Johns Hopkins undergrads have gained real-world experience and delivered valuable services, working directly with children and adults from city neighborhoods. "The best way to serve a community is to work in tandem with the community," Tiefenwerth says, "with volunteers and the community's people learning from each other."

Arriving at Homewood in 1979, Tiefenwerth served as an assistant to legendary campus Chaplain Chester Wickwire, an outspoken champion of civic engagement. His duties included providing military-draft counseling to students and finding money to keep the Tutorial Project afloat. To help address the funding need, Tiefenwerth and student volunteers developed a range of on-campus entertainment programs, including the popular Chester's Place coffeehouse, which showcased Johns Hopkins musicians, and a long-running film series. Proceeds from thousands of cheap dates became a significant revenue stream for a vital community service.

As JHU students confronted the conflicts of the Reagan era, Tiefen-werth and Wickwire developed a weekly discussion of current political and social issues. Dubbed The Sunday Experience, the program drew fire from local clergy, who complained that the university's "godless chaplain" was luring students away from worship.

"When Chet saw an opportunity to do something good in the community, he seized it," Tiefenwerth recalls. Following Wickwire's example, Tiefenwerth encouraged undergrads to develop proposals for community service. He helped students refine their ideas, locate community partners, and win grants to support their efforts. "Long before the words 'social entrepreneurship' were uttered," Tiefenwerth says, "we were entrusting students with that kind of responsibility."

Wickwire retired in 1983, and Tiefenwerth's program continued and expanded under Chaplain Gretchen Van Utt. But demand was growing for a Chaplain's Office devoted to the needs of an increasingly diverse, international population. To carry on the "social gospel" in the Wickwire tradition, the Volunteer Services program, including the Tutorial Project, was separated from the Chaplain's Office in 1991. Six years later, the fast-growing program became the Center for Social Concern.

"You could talk to Bill about anything," recalls 2009 graduate Axle Brown. "He'd walk you through it. He'd never shoot you down." Over his three years of involvement with CSC, Brown developed the social entrepreneurial skills to launch Campus Kitchen at JHU, which processes and delivers surplus cafeteria food to city soup kitchens and after-school programs.

Through the CSC, other students have found paid work teaching high school dropouts in the Remington neighborhood, clowned for kids in hospitals, surveyed community needs, organized art projects, and offered programs to ward off vacation "learning loss" among disadvantaged youth. The CSC has also been instrumental in creating two vital neighborhood institutions, the Community Mediation Center on Greenmount Avenue and the Village Learning Place on St. Paul Street.

To manage CSC's many ongoing programs, the staff has grown to eight employees, working with roughly 1,400 student volunteers and more than 100 community-based work-study participants and summer interns. Susan Boswell, dean of student life, credits CSC's success to Tiefenwerth's steady, low-key leadership, saying, "He really is the founder of all volunteer services at JHU."

Today, the university embraces the kind of community involvement that was seen as peripheral—even radical—in the 1980s. Tiefenwerth, 61, has been a major force in that evolution; now, he says, "it's time for another generation to step up," but adds that he plans to "keep my hand in" community leadership. After three decades, it's a hard habit to break.