Two inducted into American Academy of Arts and Sciences

Professors Jef D. Boeke and Robert A. Moffitt were among 180 influential artists, scientists, scholars, authors, and institutional leaders who were inducted into the American Academy of Arts and Sciences at a ceremony held Oct. 6 in Cambridge, Mass. 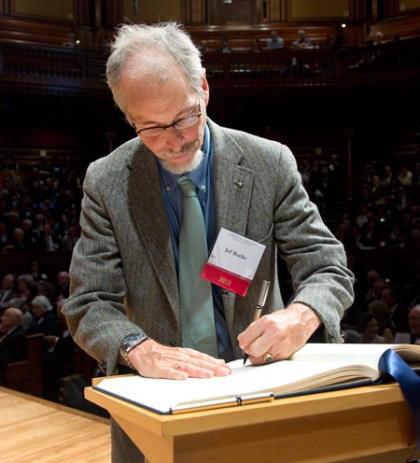 Image caption: Jef D. Boeke signs the American Academy of Arts and Sciences' Book of Members, a tradition that dates back to 1780.

Founded in 1780, the American Academy is one of the nation's oldest and most prestigious learned societies, and an independent research center that draws from its members' expertise to conduct studies in science and technology policy, global security, the humanities and culture, social policy, and education.

"Induction recognizes the achievement and vitality of today's most accomplished individuals who together with the academy will work to advance the greater good," says academy President Leslie Berlowitz. "These distinguished men and women are making significant strides in their quest to find solutions to the most pressing scientific, humanistic, and policy challenges of the day."

Boeke is founder and director of the High Throughput Biology Center and a professor of molecular biology and genetics and of oncology in the School of Medicine. Moffitt is the Krieger-Eisenhower Professor of Economics in the Krieger School of Arts and Sciences.

Since its founding by John Adams, James Bowdoin, John Hancock, and other scholar-patriots, the American Academy has elected leading "thinkers and doers" from each generation. The current membership includes more than 300 Nobel laureates, some 100 Pulitzer Prize winners, and many of the world's most celebrated artists and performers. Fifty-two Johns Hopkins faculty are members of the American Academy.