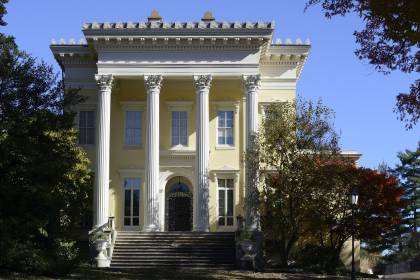 This three-part, virtual lecture series will explore different facets of Evergreen Museum & Library's exterior, shedding light on how the house and its grounds changed over the course of a century. Originally constructed in 1858, the home was occupied by two generations of the wealthy Garrett family between 1878 and 1952. During its near 100 years as a private residence, the house expanded in size and scope to accommodate the needs of its residents and changing tastes in architectural and landscape design. Using photos and architectural drawings, these virtual presentations will explore those changes, the reasons for them, and their impact on the exterior aesthetics of Evergreen.

Join a lively Q&A between Lori Finkelstein, the director and curator of Evergreen Museum & Library, and Amy Kimball, materials manager in the Department of Special Collections at the Sheridan Libraries, as they discuss 20th-century expansions to Evergreen. Between the 1920s and 1940s, many interior and exterior alterations modernized the mansion, moving away from Victorian design and adding new spaces to accommodate John Work (1872-1942) and Alice Warder Garrett's (1877-1952) collections of art and books. Particular attention will be paid to the work done at Evergreen during this period by noted Baltimore architect Lawrence Hall Fowler (1876-1971), whose papers reside at Johns Hopkins' Sheridan Libraries.

Learn more about the speakers online. This event is sponsored by the Arts, Entertainment, Media, and Entrepreneurship Affinity and Evergreen Museum & Library.