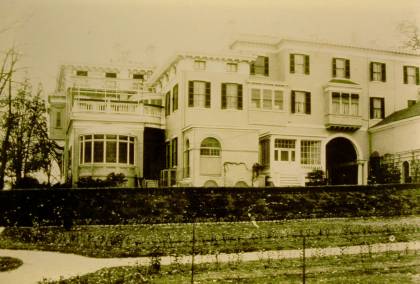 This three-part, virtual lecture series will explore different facets of Evergreen Museum & Library's exterior, shedding light on how the house and its grounds changed over the course of a century. Originally constructed in 1858, the home was occupied by two generations of the wealthy Garrett family between 1878 and 1952. During its near 100 years as a private residence, the house expanded in size and scope to accommodate the needs of its residents and changing tastes in architectural and landscape design. Using photos and architectural drawings, these virtual presentations will explore those changes, the reasons for them, and their impact on the exterior aesthetics of Evergreen.

Lori Finkelstein, the director and curator of Evergreen Museum & Library, will examine the myriad expansions to Evergreen made between the early 1880s and early 1900s by the first generation of Garretts to occupy the house. Many of the "Victorian" changes were intended to support both the growing number of workers on the premises and the growing number of objects acquired by Evergreen's owner, T. Harrison Garrett (1849-1888). Highlights will include the North Wing and porte cochère, the two-story entryway, and the famous Gold Bathroom.

Learn more about the speaker online. This event is sponsored by the Arts, Entertainment, Media, and Entrepreneurship Affinity and Evergreen Museum & Library.

Please join the rest of the series: Part III: Evergreen in the 20th Century on July 21