Supporting and promoting leadership from within 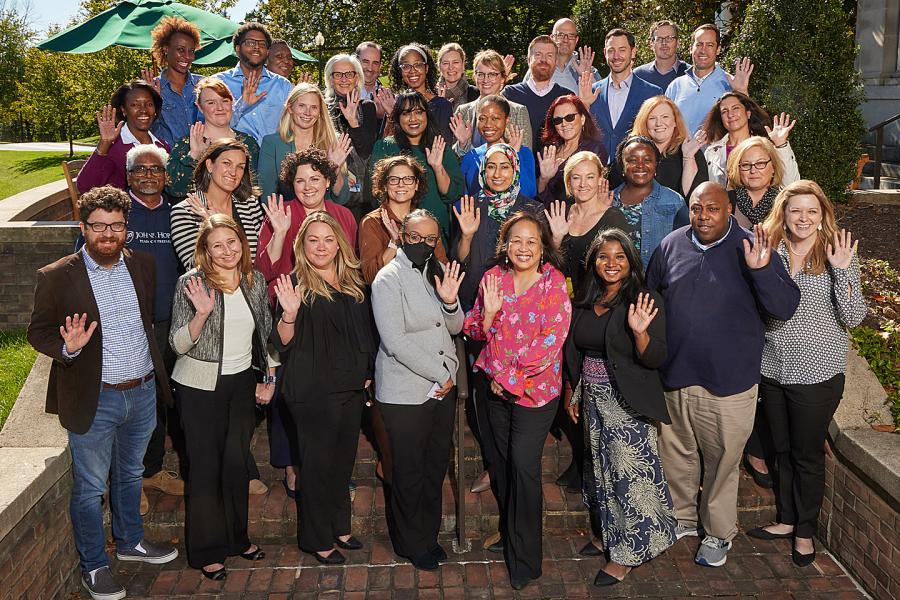 Image caption: Members of the 2022 cohort gather for a group photo in fall 2021 during a session held on the Mt. Washington campus.

Chad Clapsaddle has never thought of himself as a great communicator. So he was amazed to learn that his colleagues felt otherwise. "They said I was clear in communicating strategic priorities and translating them from the university leadership back down to people," Clapsaddle says. "I was quite pleasantly surprised."

Clapsaddle, senior associate dean for finance and administration at the Whiting School of Engineering, was reacting to anonymous feedback from his co-workers, a key component of the Johns Hopkins University Leadership Development Program (often called the LDP). JHU designed the program—which will commemorate its 25th anniversary this year with a half-day celebration on Oct. 4—to nurture the careers of faculty and staff leaders by providing them with insights and skills to make them even stronger. Courses, resources, and other support for JHU employees

"Those in the program are already people with leadership responsibility, and what we are doing is building on the fundamental skills they already have," says Kathy Forbush, executive director of the Talent Management team in JHU's Office of Human Resources, who oversees the program. "We are making them better, helping them stay on a growth trajectory as leaders in the institutions."

In addition to honing their leadership qualities, the program offers an opportunity to interact with senior university officials, including President Ronald J. Daniels, Provost Sunil Kumar, and Vice President for Human Resources Pierre Joanis. Participants also develop new and lasting ties with those from other parts of the university whom they probably wouldn't meet under usual professional situations.

"At the end, the thing we hear most is that people get a much broader understanding of the university as a complex organization," Forbush says. "They build relationships with peers from other parts of the university they never would have met outside the program. They have this intense learning experience—and then stay connected. Some have a book club. Others meet for cocktails or dinner. As they progress—get a new job or take on a new project—they remember so-and-so in their LDP cohort who is an expert in such-and-such, and they call to get their help. I can't tell you how many times I've heard this over the years."

This certainly was the case for Professor Keshia Pollack Porter, recently named chair of the Department of Health Policy and Management in the Bloomberg School of Public Health—the first Black chair in the school's history—who participated during the 2017–18 academic year.

"I've been in other leadership programs, and the one thing different about this one is the network I formed with those in my class," she says. "Initially, you are put into small groups, and you go on this journey together. What's great is that my group still meets regularly for dinner or happy hour, or, during the pandemic, online. These are relationships I really value and wouldn't have had if not for the program." 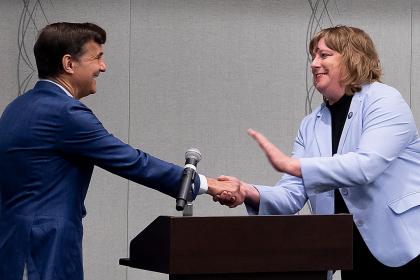 The LDP has the unequivocal support of the university's highest-ranking officials. "The president always comes, and the provost always kicks it off," Forbush says. "The deans and other senior leaders always come when I ask. This gives people a chance to interact with them and ask them questions. Our leaders are informal in these settings. They open it up for questions, and they answer them—even the hard ones—in a truthful way. It's an opportunity for people to get closer to our leaders."

Moreover, these senior officials say they get as much out of the experience as the participants.

"It has been truly inspiring to see the commitment of our LDP participants to pursuing their professional growth and advancing the mission of our university," President Daniels says. "I am thrilled to have had the opportunity not only to reflect upon and share my own leadership experience with them but to learn from their experiences as well."

The program (not to be confused with a certificate course with the same name offered by JHU's Carey Business School) meets periodically throughout the academic year and is divided into three sections, each with a theme: self-discovery, team management, and leading within the university structure. Participants engage with various guest speakers, learn from role-playing and other exercises, and work with an executive coach to discuss individual personal scenarios and how to deal with them.

The first step is not always the most comfortable: seeing yourself as others see you.

"You're almost scared to read the comments," Clapsaddle says of the printouts of assessments from his boss and colleagues that he received at the outset of the program in fall 2017. "You're thinking, Oh my God, what are people going to say about me? It's an incredible moment of vulnerability because you put yourself out there. One of the things you learn is [that there are places] where you might perceive yourself to be strong but others don't. You have to stop and think: If enough people are saying this, it's an area I need to work on.

After digesting the evaluations, participants work with the coach to make sense of the criticism—and the praise—and talk about how to best use those insights on the job. "These are super personal, but the rater's perception is your reality, and what you choose to do with it is up to you," Forbush says. "You need to know how you come across. You are the only person who can change, and the decision to change is up to you."

Invariably, there are valuable takeaways that evolve from the one-on-one sessions with the coach. "One of the things we talked about was the value of 'the pause.''' Clapsaddle says. "Rather than reacting in the moment, you pause and think about it a little before you respond. I am passionate about a lot of topics, but it could be off-putting in that people might think you aren't listening if you react too quickly. I definitely use 'the pause.'"

Recent graduate Suresh Rao, interim director of Information Technologies at the Peabody Institute, agrees. He says the experience left him feeling more confident about making decisions. "Sometimes, decision-making is very, very hard," he says. "My big takeaway was how to get into better decision-making mode, including making decisions and then explaining them to folks and being transparent. In my old role [as an IT technology manager], I was less inclined to jump in and explain things because I feared how people would react. I feared failure, that I was making the wrong decision. The course got me confident about building consensus, explaining, and coming to a decision that people knew was coming—and wasn't out of the blue. I'm also making a much more concerted effort to include people in the process."

Pollack Porter recalls how she was struck by an observation made in one of the assessments that addressed her constant notetaking during meetings. "The perception was that I was not 'present' in meetings," she says. "Nobody had ever said that to me before. Keshia is taking notes on her phone, and it makes me feel like she's checking her emails and not paying attention. That was hard. It's important for me as a leader for people to know I value them, and that I hear them. I have been mindful of that behavior ever since. Now that I am a chair, and meeting with people all the time, I find myself giving a disclaimer [about my notetaking] so they know I am fully listening and engaged." 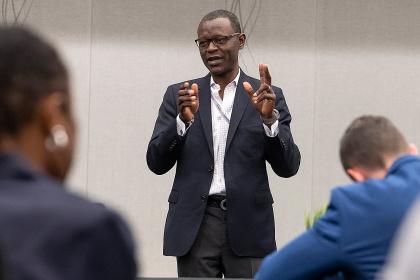 The Leadership Development Program was revised in 2016 and relaunched the following year to reflect what past participants felt needed to be changed, Forbush says. In the older version, "the content didn't have a thread—a way of organizing that held it together or made sense," she says. Also, participants came together in January to kick off the program, then did not meet again until the final three days. "There was no bonding until the end."

In response, the program now follows an academic year model, beginning in September with a half-day meeting, followed by three additional sessions of three full days each in October, January, and April; members of the cohort "graduate" in June. Another change: There has been a concerted effort to ensure that divisions nominate underrepresented individuals and women. "In fact, in the last five years, more than 60% of LDP participants have been women," Forbush says.

Since the LDP's inception in 1997, a total of 794 people have completed the program, with 389 still working at the university (113 have retired). Typically, the program trains between 36 and 40 people each year. Members of the incoming September cohort will receive their acceptance notices in the coming weeks.

"We want to develop our own leadership and fill open leadership positions with people who already are here," Forbush says. "We want them to know that these possibilities are open to them. Programs like this one build their skills, confidence, and their network of colleagues, and expose them to leadership and to other parts of the institution and its operations."

Pollack Porter points out the LDP's uniqueness, saying that few institutions can boast of such programs that support and promote leadership from within. "It speaks volumes about how much the institution values faculty and staff who participate in this program," she says. "It also speaks to the institution's desire to nurture the careers of its faculty and staff and demonstrates its commitment to sustaining strong leadership."

Clapsaddle believes he emerged stronger from the program and frequently uses the insights he gained from participating. "I think I've become much more of an influencer, and I've applied things I learned in terms of how I interact with my team," he says. "I certainly have adopted 'the pause' in being a better listener, but I also think I am a little bit more in tune with emotional intelligence; that is, I try to interact with an individual in ways that are specific to that individual. It has enabled me to be a more effective influencer, meaning I can read another person's emotions in real time, how body language and verbal cues indicate how the conversation is going."

His only regret is not having had the opportunity to participate in such a program earlier. "I've been in an executive position for 20 years, and I wish somebody had told me this stuff early in my career because it's hard to change behaviors once they are ingrained," he says. "Nevertheless, I am a work in progress."