The publication's annual rankings are based on a survey of more than 5,000 veterans of U.S. armed forces

Johns Hopkins University has been named one of America's Best employers for Veterans by Forbes magazine, recognizing the university as one of the workplaces liked best by those who have served in the U.S. armed forces.

The list, published annually, is based on the results of a survey of more than 5,000 veterans who have served in U.S. armed forces, either in the regular military or in the National Guard or military reserves. Survey respondents, who work part- or full-time for organizations with at least 1,000 employees, were asked to evaluate their employers' working conditions, approach to diversity and inclusion, and whether their work environment is veteran friendly. They were also given the opportunity to evaluate other employers in their respective industries.

The 200 companies receiving the highest total scores made the final list. Johns Hopkins ranks No. 149 overall and is one of just four employers listed in the Education category.

Approximately 200,000 U.S. military service members enter civilian life each year, according to the Department of Labor, and many of them find the transition challenging. According to a U.S. Chamber of Commerce Foundation survey of 1,000 veterans who transitioned out of the military between 2011 and 2016, 53% said they were unemployed for four months or more. Of those who did find employment, 44% changed jobs within their first year. 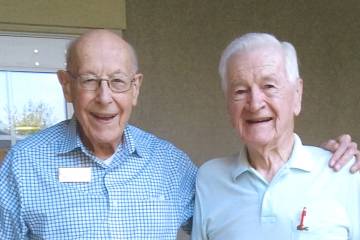 Published Nov 10, 2021
After serving in WWII, Paul Hessemer and Bud Holecheck became friends as Homewood undergrads. Recently the two members of the Class of 1949 reunited for the first time in more than 70 years to catch up and discuss their shared wartime history.