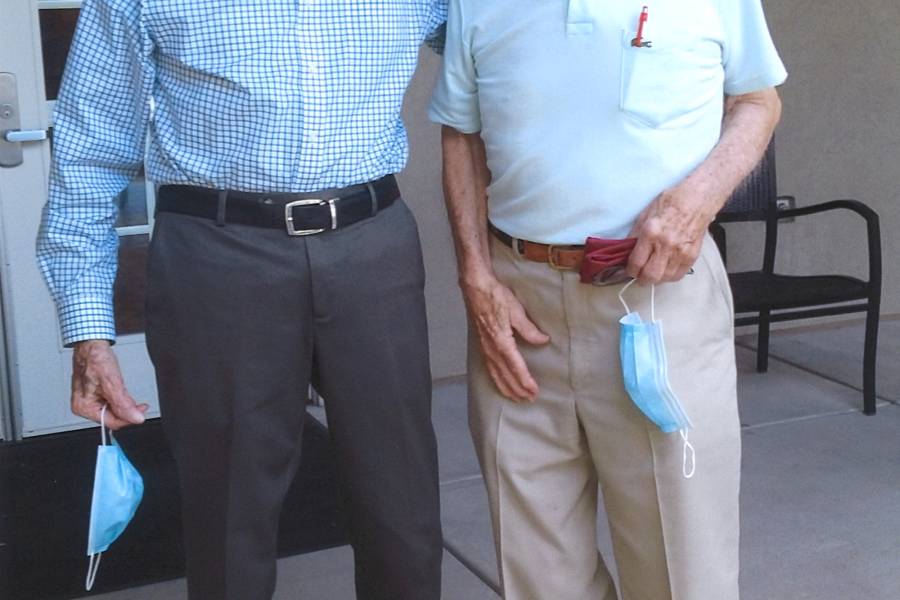 After serving in WWII, Paul Hessemer and Bud Holecheck became friends as Homewood undergrads. Recently the two members of the Class of 1949 reunited for the first time in more than 70 years to catch up and discuss their shared wartime history.

Johns Hopkins University was among the nation's first campuses to establish a Reserve Officer Training Corps in 1916. More than 100 years later, the university continues to welcome and support active duty service members and military veterans, and to recognize their service and sacrifice.

"On this Veterans Day, we pause to pay tribute and to honor the many members of our community—past and present—for their defense of our nation and its foundational ideals," JHU President Ron Daniels said. "The selfless sacrifice, courage and dedication of those who have served our country is the bedrock upon which our treasured liberty and security is built."

Around Christmas in 1944, Army infantryman Paul Hessemer was staggering in despair through waist-high snow in the forests of southeast Belgium. In the skies directly above, Francis "Bud" Holecheck—an Air Force second lieutenant who was then a stranger to Paul, but would later become his groomsman—was piloting a Lockheed P-38 Lightning.

"We found out I was flying strafing and dive-bombing missions right in the area where Paul was trying to keep alive against ground soldiers as well as our bombs going off," Bud said in a recent interview. "It's an odd world."

That was the final winter of World War II, when both men were 19. In the years following they became close friends as engineering students at Johns Hopkins, but it wasn't until they reunited recently that they learned of their counterpart locations during the Battle of the Bulge, the last major German offensive on the Western front.

"We found out I was flying strafing and dive-bombing missions right in the area where Paul was trying to keep alive against ground soldiers as well as our bombs going off. It's an odd world."
Bud Holecheck

As Paul recalls, veterans studying at Johns Hopkins in those days weren't inclined to talk much about their wartime experiences. "I think we put the war behind us," he says. "There was an attitude of 'Hey, let's stop fooling around and not lose any more time.'"

Before summer 2021, the last time the two friends saw each other was precisely June 4, 1949, the date of Paul's wedding and the day after their last final exam.

Over the decades they loosely kept track of each other—"I knew where Bud was, and he knew where I was," Paul says—but on a phone call earlier this year, they decided it was high time to reunite in person. On Aug. 10, 2021, Bud, who still drives at age 96, made the two-hour trip from his home in Chester, Maryland, to see Paul in New Holland, Pennsylvania. The two men spent the afternoon reminiscing.

Paul and Bud say they first met as part of a Johns Hopkins program allowing World War II veterans to compress their freshman studies into an accelerated schedule, making up for time lost overseas. Paul's father, a Hopkins engineering professor also named Paul Hessemer, encouraged him to apply. Bud, who'd spent two years working at a machine shop at the Aberdeen Proving Ground before the war, knew he wanted to seek higher education and Hopkins was close.

Both attended the university as day students and remember their time there as mostly business. For their strong grades, both were elected into the engineering honor society, Tau Beta Pi. "There was no social life on campus, just work your tail off," Bud says. "We were there for a mission."

But the two became friends through overlapping classes, and sometimes met off campus for double dates. During his first semester at Hopkins, Bud married Ruth, a friend he'd known since third grade and reunited with after the war. Paul was dating Nancy, his future wife. Their first date was a Baltimore Symphony Orchestra concert, sealing their "song" as Beethoven's Symphony No. 7.

After graduating, both men made direct use of their engineering degrees. Paul joined General Electric in the switchgear division and spent about 25 years with the company, living in Pennsylvania, before landing in Stockton, California, as an engineering manager at the RTE Corp for 15 years. He and Nancy raised four daughters and retired in Chadds Ford, Pennsylvania, in the early 1990s. 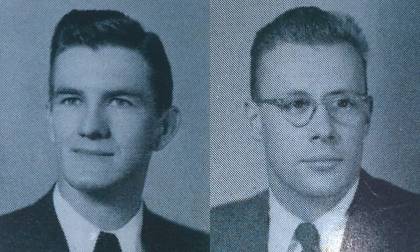 Image caption: Photos of Bud Holecheck, left, and Paul Hessemer from the 1949 Hullabaloo

Bud remained in Maryland for his career, starting with the Baltimore Transit Company and Western Electric before working 30 years for Harford Systems, a metal fabricator where he served as vice president and general manager. He and Ruth had two sons, and in the 1980s he helped one of them start Tool & Die Specialties, a machine shop in Aberdeen. On the side, he's invested in real estate throughout his life.

Both men cherish their long marriages—each lasting more than 60 years—but are now widowers. Paul lives in a retirement home, and Bud lives on his own in Chester. "Paul and I have been blessed with awfully good health for our age," says Bud, who rides his bike for several miles each day. Soon he hopes to move to a condo he owns near Edgewood. "I better get going, though, because of my age," he quips.

"We can't forget how fortunate we are," Paul adds. "We've had our traumas along the way, but it's been a long life in a great world, more or less in good health."

During their August reunion, the two veterans uncovered memories they'd never shared with each other from World War II.

Paul spent 33 months total in the Army, only about two weeks of those on the front lines with the 75th division, company C. Of the Battle of the Bulge, he says, "I didn't know what was going on and before I knew it, I'd frozen my feet. It was miserable about 100% of the time in those woods, in the snow, in the mud and the cold, not having anything to eat." When his feet swelled past the point of fitting in shoes, he was classified as disabled and the private first class was sent home. "An infantryman is no use without shoes," he says.

Bud, who graduated high school at 16, was drawn to flying planes. After training he was commissioned by the Air Force in January 1944 to become a second lieutenant and pilot. "I learned when I got overseas that it wasn't all glory," he says. "You really had a problem in life if you lost half of your best friends in six months' time."

"I think we put the war behind us. There was an attitude of 'Hey, let's stop fooling around and not lose any more time.'"
Paul Hessemer

The two men say the concept of post-traumatic stress disorder simply didn't exist when they were young. "I was part of some terrible—" Paul says, not finishing the sentence— "but I don't want to think about it or dwell on it. It was an awful thing that had to be done and we were at an age to do it. I always thought of it as our duty providing a common defense."

Bud continued flying planes, first as a reservist then later for fun, until he turned 90. "I decided I wanted to live longer," he says of the decision to stop.

After the August visit, the two friends found a second time to meet up in September, when Paul's daughter drove him to Chester for a few more hours of reminiscing. They share a sense of making up for lost time.

During their phone interview together, Paul directed an aside to Bud: "I'm determined to get together again—aren't you?"

Bud agreed. "All we need is the good Lord's presence," he said.