Namandjé Bumpus to chair Department of Pharmacology and Molecular Sciences

Read about her historic appointment, plus news of other School of Medicine faculty

Namandje Bumpus has been named director of the Department of Pharmacology and Molecular Sciences and will hold the E.K. Marshall and Thomas H. Maren Professorship in Pharmacology. The promotion makes Bumpus the first African American woman to lead a department at the Johns Hopkins University School of Medicine and the only African American woman currently chairing a pharmacology department at any medical school in the nation. 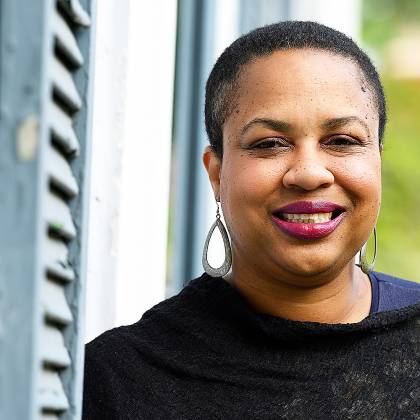 Bumpus researches genetic differences that influence how people metabolize antiretroviral drugs used to treat HIV. She says her work aims to correct a long-standing limitation of scientific research, which has focused on European American males in their 20s.

Bumpus joined Johns Hopkins in 2010 as an assistant professor in the Division of Clinical Pharmacology. She became an associate professor in 2015, and from 2015 to 2017, she was the school's first associate dean for institutional and student equity.

Read more about Bumpus' historic appointment on the Hub.

Scott Berkowitz , an associate professor in Cardiology, has been appointed to the new position of chief population health officer and vice president of population health for Johns Hopkins Medicine. Reporting directly to Kevin Sowers, president of the Johns Hopkins Health System, Berkowitz will develop a JHM population health strategy, providing direction, leadership, and management of these activities across the organization. Berkowitz's academic focus has been on innovation in care delivery and payment models, and he has spoken and written extensively on these topics. He also has held numerous positions in federal and state government.

Laura Ensign, an associate professor of ophthalmology, has been inducted into the American Institute for Medical and Biological Engineering. Fellows represent the top 2% of the medical and biological engineering community. Ensign was elected for outstanding contributions to nanomedicine, drug delivery, and translation of nanotechnologies from the bench to the bedside.

Robert Higgins, chair of the Department of Surgery and surgeon-in-chief of Johns Hopkins Hospital, will be inaugurated as president of the Society of Surgical Chairs at the group's annual meeting in October. The SSC is an international organization composed of chairs of departments of surgery and surgical specialty departments of medical schools, academic medical centers, and teaching hospitals of the United States and Canada.

Pamela Johnson, vice chair of quality and safety in the Department of Radiology with joint appointments in Oncology and Urology, has been appointed vice president of care transformation for the Johns Hopkins Health System. This is a new position on the JHHS leadership team. Reporting to the senior vice president of medical affairs, Johnson will build on the success of provider-led initiatives to improve the quality, consistency, and efficiency of care delivery in alignment with the Johns Hopkins Medicine Innovation 2023 strategic plan.

Dale M. Needham, a professor of pulmonary medicine and medical director of the Critical Care Physical Medicine and Rehabilitation Program, has been awarded honorary membership in the American Physical Therapy Association. Honorary membership is the highest honor awarded to non-physical therapists by the APTA, acknowledging significant, measurable, and profound contributions to the field.

Michael X. Repka, a professor of pediatric ophthalmology, has been named this year's Jackson Memorial Lecture speaker at the annual American Academy of Ophthalmology meeting, which will be held virtually in November. His talk is titled "Improving Amblyopia Outcomes Through Clinical Trials and Practice Measurement."

Maria Trent, a professor in the Department of Pediatrics, has been named inaugural chief of the new Division of Adolescent/Young Adult Medicine at Johns Hopkins Children's Center. A major focus of Trent's research and clinical interest has been on reducing adolescent and young adult sexual and reproductive health disparities.