Muyinatu Bell, an assistant professor in the Whiting School's Department of Electrical and Computer Engineering, has received two honors: a Sloan Research Fellowship and recognition as Outstanding Young Engineer in Maryland. 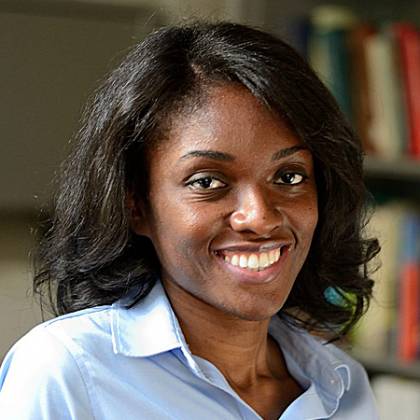 The Sloan two-year fellowship, which brings a $70,000 award, recognizes early career scientists who show promise in making significant contributions to their fields. Read more on the Hub.

The Outstanding Young Engineer Award is given by the Maryland Academy of Sciences and the Maryland Science Center. Bell was honored for her pioneering, innovative contributions to the field of photoacoustic-guided surgery. Her Photoacoustic and Ultrasonic Systems Engineering Lab develops technologies with applications in neurosurgical navigation, cardiovascular disease, women's health, and cancer detection and treatment. Read more on the Hub.

Somnath Ghosh, the Michael G. Callas Professor in the Department of Civil Engineering, has received significant recognition from three professional societies: the American Society of Mechanical Engineers, the Society of Engineering Science, and the International Conference on Computational Methods. ASME has awarded him the 2019 Ted Belytschko Applied Mechanics Award, which is given to an outstanding individual for significant contributions in the practice of engineering mechanics. Ghosh has also been elected an SES Fellow, which recognizes outstanding individuals for significant contributions in the practice of engineering mechanics; contributions may result from innovation, research, design, leadership, or education. And the ICCM awarded him the International Computational Method Medal at its international conference, held last August in Rome. Ghosh is also the director of Johns Hopkins' Computational Mechanics Research Laboratory and the Whiting School's Center for Integrated Structure-Materials Modeling and Simulations.

Gregory Hager, a professor of computer science, and K.T. Ramesh, director of the Hopkins Extreme Materials Institute and a professor of mechanical engineering, have been elected to the American Association for the Advancement of Science. Read more on the Hub.

Joseph Katz, the William F. Ward Distinguished Professor in the Department of Mechanical Engineering, has been elected to the National Academy of Engineering. He was named to the academy along with 85 other U.S. members and 16 international ones. Katz was honored for his work developing optical methods in experimental fluid mechanics for turbomachinery, cavitation, turbulence, and environment flows.

Suchi Saria, the John C. Malone Assistant Professor of Computer Science, is part of a team of Johns Hopkins researchers that has received the Armstrong Award for Excellence in Quality and Safety. The award is presented annually to a physician or team that partners with patients, families, colleagues, and staff members to optimize patient outcomes and eliminate preventable harm.