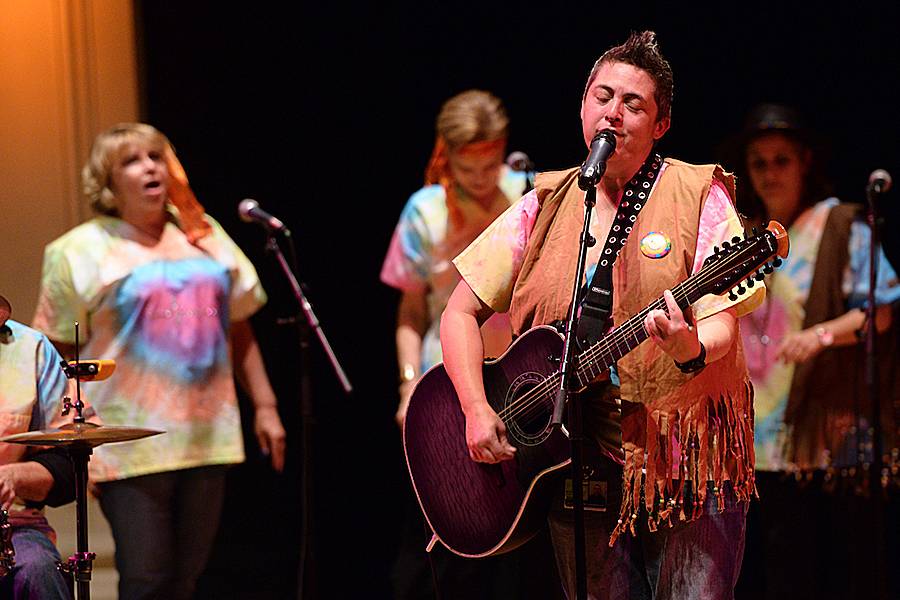 Image caption: The School of Nursing's Cardiac Arrests performs in the 2017 competition.

When the performers take the stage on Monday, Dec. 10, for Hopkins' Got Talent, the audience will get to choose the winner along with a panel of judges.

The signature event raises funds toward the university's 2018 United Way campaign goal of $530,000. Supporting the event results in a win-win outcome: The United Way of Central Maryland receives the proceeds from ticket sales, and the winner collects $500 and bragging rights. Donations are being collected now through the portal on the Work, Life and Engagement website to support charities chosen by each act and the campaign goal of each act's division.

The event is open to the public. Tickets are $10 at the door and half-priced when purchased in advance online. Tickets are free for JHU students with an ID. Here's the lineup for the evening:

Riaz Qureshi, Bloomberg School of Public Health
Riaz Qureshi is a second-year PhD student in the Department of Epidemiology, where he studies clinical trials and evidence synthesis methods. Music was always a part of his life, he says, when he was growing up in rural Southern Ontario, Canada. His primary instruments are the guitar and drums, but now he experiments with other instruments, including the piano and banjo. He has played and sung with progressive metal, pop, rock, and folk bands.

Qureshi will play the guitar and sing in the competition and raise funds for the Johns Hopkins Neighborhood Fund.

Formithia Hurte, Krieger School of Arts and Sciences
Formithia Hurte says she found her love for singing at a very early age, singing in the children's choir at church, and most of her singing has been with church choirs and groups. She was honored, she says, to sing background with a group called Juan Santiago & Uninhibited Praise (Takin' it to the Streetz). While she doesn't classify herself as a soloist, she loves all kinds of singing and many other forms of art.

Hurte, an administrative coordinator in the Dean's Office, will sing in the competition and fundraise for the Arts Project.

Jim Brasic, School of Medicine
Jim Brasic's parents met in the Aragon Ballroom in Chicago and gave him dancing genes, he says. An nuclear child neuropsychologist and assistant professor, he studies classical ballet at Maryland Youth Ballet and regularly performs classical and contemporary work at the Sun King Dance Camps at Virginia Commonwealth University and with groups around the country. He also has performed with the Johns Hopkins University Modern Dance Company for several years.

Brasic will perform a ballet scored by Tchaikovsky and choreographed by Marius Petipa in 1890. He is competing to fundraise for the Crohn's & Colitis Foundation, Maryland/Southern Delaware Chapter.

Cardiac Arrests, School of Nursing
The group Cardiac Arrests was formed during last year's open audition for Hopkins' Got Talent, when so many talents emerged from the division that they decided to create one "super act" made up of multiple faculty and staff.

Cardiac Arrests is competing to fundraise for the It Gets Better Project.

Jessica Keyes, Sheridan Libraries
Jessica Keyes is a performer and composer whose compositions, she says, explore trickster characters, ecstatic energy, and communion with the audience. Keyes leads Bedlam Brass, an "anti-marching band" that pops up with original music in unexpected places, and is also a member of Trucker Talk, an experimental chamber ensemble that mostly provides live music for puppet shows. During the day, Keyes is the user experience analyst for the Sheridan Libraries, working to improve the services and tools provided by the libraries to support learning and research.

Keyes will play the saxophone with electronics and compete to raise funds for the Village Learning Place.

Elizabeth Vecchione, University Administration
Elizabeth Vecchione, a senior administrative coordinator in the Treasurer's Office, earned her master's degree from the Manhattan School of Music in piano and has worked as a professional accompanist/pianist, music director, teacher, and songwriter for more than 20 years.

Vecchione will sing an original song while playing the piano and compete to fundraise for the American Cancer Society.

Brandon Garrel, University Administration-HR
Brandon Garrel is a senior recruiter for Human Resources' Health Sciences Department who has a passion for inspiring others and supporting underserved populations. Garrel says that his act is influenced by one of the greatest performers of all time, and (to the surprise of those who know him) it's not Michael Jackson. Like the late artist Jackie Wilson, he loves to perform and put smiles on the faces of others.

Garrel is competing to fundraise for the Community Assistance Network.

Eve Carlson and Greg Burks, University Administration-HR
Eve Carlson, a WorkLife Programs manager, has been involved in the performing arts throughout her life. At Bucknell University, she majored in theater and sang in an a cappella group. Over the past several years, she has participated in the Baltimore arts community with organizations such as the Baltimore Improv Group and the Baltimore Rock Opera Society.

Greg Burks starred in his first role at the age of 8 in a production of Oliver at Toby's Dinner Theatre in Columbia, Maryland. Since then, he's performed at venues around the country, including dancing at the White House and the Kennedy Center. Currently a community programs manager in the Office of Work, Life and Engagement, Burks is dedicated to serving others in his hometown of Baltimore City.

Special performance
Wheel gymnast Amanda Gatewood, of the Bloomberg School of Public Health, won top honors last year in the first Hopkins' Got Talent competition and will give a special performance at this year's event. Gatewood began studying wheel gymnastics to diversify her fitness and says she completely fell in love with the sport.

In the inaugural Hopkins' Got Talent, participants and ticket sales raised nearly $7,000.