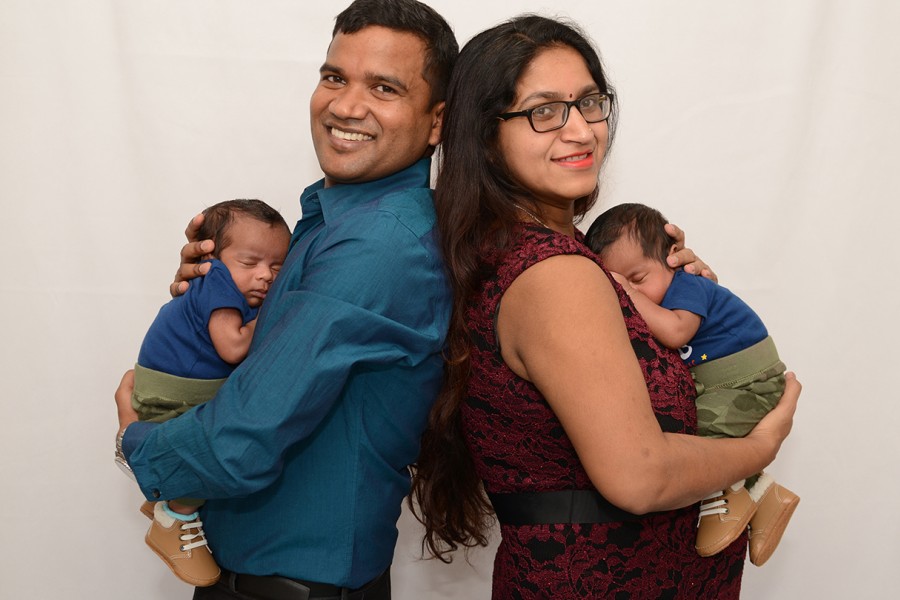 Image caption: Santosh Bharti and his wife, Kanchan Sonkar, with their twin sons, Samar and Sameer.

Before their first Father's Day, new dads share how they made the most of their time off

Case in point—she couldn't help but notice the time on the wall when their first child was about to enter the world: 1:59 p.m. and some 40 seconds on Feb. 4, 2018. Kasey quietly rooted for a 2 p.m. delivery before giving one final push. In the ensuing moment, the doctor would hold up the couple's baby girl, Aubrielle Kensington Judy, healthy and weighing nearly 7 pounds. 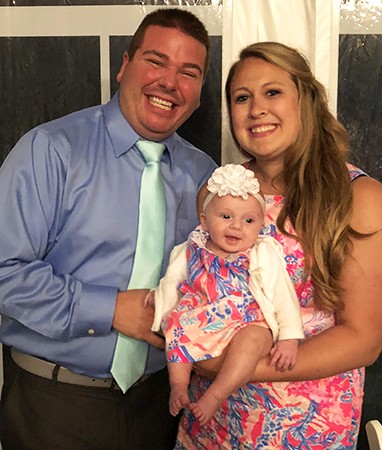 Image caption: Thomas Judy and his wife, Kasey, with their daughter, Aubrielle.

"[My wife] smiled and was like, 'Oh man.' I shook my head," says Judy, recalling the momentous day. "I said, of all the things to fret about. We had a natural birth. The pregnancy went well. Everyone was healthy all around. We're pretty good here."

Judy, a senior grants and contracts analyst with the School of Medicine's Infectious Diseases division, says another vital aspect of newfound parenthood that the couple didn't have to sweat was ample bonding time with their new daughter. Thanks to Johns Hopkins University's new Family Leave for New Parents policy, Judy would take the next two weeks off from work, followed by a series of three-day work weeks—all fully paid—to be present as a newly minted dad. He would be there to help his wife get dressed in the morning, change Aubrielle's diapers, cook, and overall share the joy of experiencing their baby cry, reflex smile, fall asleep, and burp as needed.

"I feel so lucky that we had this time to use. That relieved my immediate stress and allowed me to really enjoy that time with them, as we were transitioning to what is now our life."
Thomas Judy

The Family Leave for New Parents policy, introduced last summer, offers paid leave to full- and part-time employees who have worked at the university for at least one year. Mothers and fathers have four weeks of leave at full pay after their child is born or placed through adoption, and employees who give birth have an additional six weeks of paid birth recovery leave. An additional policy change now allows employees to use sick days for child bonding as defined by the federal Family and Medical Leave Act, or FMLA.

Previously, faculty and staff relied on the reduced salary from short-term disability, used their accrued leave, or took leave without pay.

Before he learned of the new policy, Judy wondered how much time he could afford to take off. He had assumed he would use FMLA time, then use accrued sick and vacation time, and thereafter only receive a portion of his salary.

"All that was certainly a stress factor, trying to figure out what we can and can't do. And then we found out about this new benefit," he says. "I feel so lucky that we had this time to use. That relieved my immediate stress and allowed me to really enjoy that time with them, as we were transitioning to what is now our life." 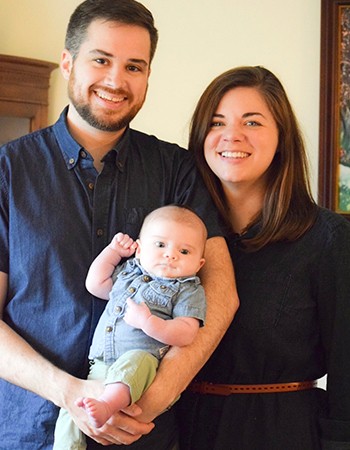 Image caption: Michael Carver and his wife, Lisa Carey, with their son Patrick.

The parental leave policy covers employees who give birth, fathers, same-sex spouses/partners, adoptive parents of children under age 12, and parents of children born via surrogate. The four weeks of parental leave for faculty and staff can be taken all at once or in full-day increments within the first 12 months after the birth of a child or placement of an adopted child.

To date, 382 Johns Hopkins employees have taken advantage of the new benefit, with every academic division of the university represented. Seventy-three percent of those employees requested birth recovery leave, and 27 percent requested parental leave only.

Wanda Karangelen, executive director of business services for the university's Office of Human Resources, says that the new policy gives employees the time they need to bond with a new child.

"They don't have to worry about their pay, or job, or managing vacation and sick time," she says. "They can just enjoy their parenthood."

For new parents, the policy sends a strong message about the university's support for families with recent arrivals. In the past, many moms and dads were hesitant or unable to take more than a few weeks off because they hadn't accumulated enough sick or vacation time. For others, in the absence of a formal policy, it was unclear how much leave was appropriate.

"My sense from the parents I've spoken with is they're relieved, because many of these people are new to the organization and don't have a lot of leave," said Cynthia Addison, HR's manager of business services. "They're glad to not have to make the decision between do I stay home with my family without pay or do I go to work because I can't afford to stay home."

Judy says that throughout that first month as a new parent, he often thought, What would have happened if he couldn't have been there for his wife and child? What moments would he have missed? Who would help around the house?

"Those first two weeks, the days off were really needed, mostly for recovery time," he says. "Even after that, when I was on a three-day work week, the benefit helped to transition us back to working full-time."

"Having the full year to take this time adds a different level of flexibility that is really beneficial. ... The ability to take a few days off a week but still keep projects moving forward is really nice."
Michael Carver

You can say the benefit came in doubly handy for Santosh Bharti and Kanchan Sonkar. Their identical twin sons, Samar and Sameer, were born on Jan. 24 at Johns Hopkins Hospital. Sonkar underwent a C-section due to complications, and the twins were born premature. After the procedure, Samar, who had a low birth weight, was put into the newborn nursery and later was shifted to intensive care. Mother and son would spend nearly two weeks at the hospital before being discharged.

"The benefit definitely helped us manage our two babies at different locations, hospital and home," says Bharti, a research associate in the Department of Radiology at the School of Medicine.

With Sonkar recovering from the C-section and unable to lift heavy weights, Bharti took charge of cooking, cleaning, and putting the babies to sleep.

For twins, sleep time is a balancing act, he says. He eventually got into a routine of feeding, baby massages, and hot water baths that helped the pair sleep five hours through the night. He also found time to massage mom to help in her recovery.

Bharti says the benefit gave him peace of mind, knowing he could focus on his wife and children and not stress over work.

"I think for one month I didn't open my laptop or check my email, unless it was urgent," he says.

Sonkar, a research fellow in Radiology at the School of Medicine, says she took the full eight weeks of birth recovery leave available to her. All eligible full-time graduate students and postdoctoral trainees can receive an eight-week accommodation to care for a new child with no loss in tuition benefits; stipend support; or benefits from a training grant, fellowship, or scholarship.

"It was really good to have that time off," she says. "We have no family close by, so without this benefit, we would have been looking for help. This was a really good policy change that Johns Hopkins has made." 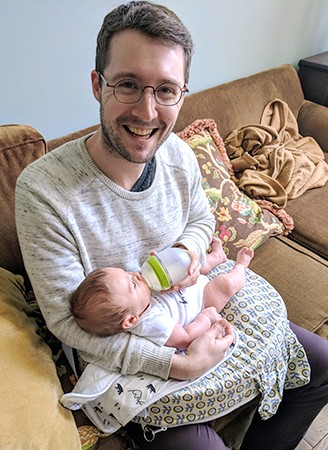 Daniel and Christine Hertenstein learned they were expecting a few days before the new policy was announced.

"I remember thinking, 'Great! This is what we're going to do,'" Daniel Hertenstein says. "Up until then, I didn't really give much thought to how much time I would take off, although I had been stockpiling some vacation and sick time in case I needed it."

The couple's son, Percy, was born on March 8. Hertenstein says he used the entire four weeks consecutively, then worked three days a week, using vacation and some sick time, before returning to work full-time. Christine, a genetic counselor in the Department of Gynecology and Obstetrics at the School of Medicine, took 12 weeks.

"I just wanted to be there as much as possible," says Hertenstein, a senior programmer analyst at the Bloomberg School of Public Health. "It's such an exciting time, being our first child. And we didn't know what we were doing. I still want to be there as much as possible. We wanted to take the full amount of time to get into a routine—not that there is a routine yet. We're still coming to grips with the life change."

Recalling those first two months, Hertenstein says that his wife did the feeding, he did most of the diaper changes, and they happily shared in the playtime responsibility.

"The first time he smiled and made cooing noises was really cool. Besides him being born, that moment will be up there forever," he says. "And when your own child looks you directly in the eye, that was also amazing."

Michael Carver, a senior associate director of development for the university, decided to stagger his leave time. He took off two weeks after the birth of his son, Patrick, and—knowing that he and his wife had a gap in their child care this summer—Carver held back some of his leave time so that he could work three days a week starting in June, until his son could start at day care.

"Having the full year to take this time adds a different level of flexibility that is really beneficial," Carver says. "As a fundraiser, our year is very fiscally driven, and I didn't want to take a lot of time right away in March and April, which is our peak time of the year in getting donors and trying to close gifts. And now the ability to take a few days off a week but still keep projects moving forward is really nice."

Carver says he has three sisters who all recently had kids but didn't have such a progressive leave policy to take advantage of.

"When I told them about mine, I think there was a little bit of jealousy," he says.

Additional details for faculty and staff are available on the Human Resources website. Details for graduate students and postdocs are reflected in department handbooks, and the policy is on the university website. 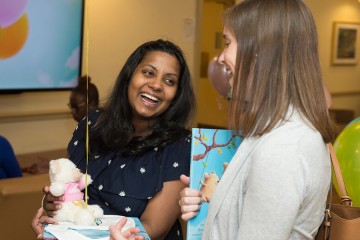