A search firm called Charlene Moore Hayes in the spring of 2003 and asked her to interview for a position at Johns Hopkins University. Hayes was settled and content in North Carolina, without a desire to leave. But she reluctantly entered the candidate pool anyway.

Then, on Hayes' third visit to the university, something clicked. She felt at home.

"It clearly was one of the best decisions of my life," she says.

Fourteen years later, and Hayes is on to her next adventure. After serving first as vice president for human resources and currently as senior executive for human capital strategy, she will retire at the end of this month.

The university held a retirement reception for Hayes on June 8 at Gertrude's at the BMA to celebrate her accomplishments. Stopping by to wish her well were more than 100 invited guests representative of Hayes' impact on individuals both at Johns Hopkins and in Baltimore.

"The thing that I hold [onto] most about Charlene is that she was a leader who cared very much about me personally, my family life, and my professional development and career," said Heidi Conway, Hayes' successor as vice president for human resources. "She was key to helping me grow. I'm just very grateful."

President Ron Daniels' remarks recognized Hayes' immense impact on the community and her willingness to tell leadership "what the right thing to do was."

"She brings judgment, clarity of expression, she has good reasoning skills, she's articulate," Daniels said. "The way in which people in HR and, more broadly, the university … treat people is something [Hayes] brought."

Although Hayes will join her husband, Floyd Hayes, in retirement, she plans to still be quite involved in the Baltimore community. She will start a human resources consulting firm and will continue to serve on the boards of the United Way of Central Maryland, Baltimore Corps, and others.

"Hopkins was always community-focused ... that just fits so naturally with my personality," she said.

In the meantime, Hayes and her husband plan to travel. The following day, the couple would be leaving for Spain and Morocco, and they said they intend to take plenty of other trips in the future.

"I told her I'm going to keep a suitcase packed," said Floyd, who is a retired JHU faculty member. "So, whenever she's ready, I'll be ready." 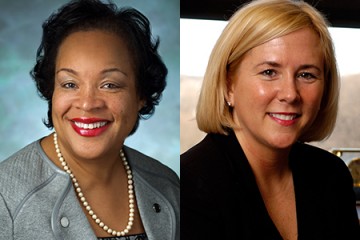