After a dozen years—to the day—serving as JHU's vice president for human resources, Charlene Moore Hayes has been appointed to the newly created role of senior executive for human capital strategy, effective Nov. 1. In this position, she will serve as a senior adviser to President Ronald J. Daniels, working closely with the senior vice president for finance and administration, Daniel Ennis; and the vice president and chief of staff, Kerry Ates. She will have responsibility for a broad range of human capital initiatives, including leadership recruitment and development, as well as employee relations at senior levels throughout the university. 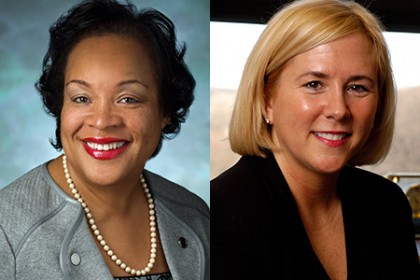 Following on Hayes' move to this new role, Heidi Conway has been named vice president for human resources.

The appointments were announced Oct. 22 by Ennis, who called the leadership changes "significant and exciting."

"Charlene arrived at Johns Hopkins in 2003, and in the years since, she has markedly strengthened the university's human resources function, attracted a strong group of leaders to oversee its functions, and, more recently, led a major transformation of the organization," he said.

Before coming to Johns Hopkins, Hayes served for nearly 20 years as the chief human resources officer at North Carolina State and Purdue universities. She is a graduate of Cornell University, where she majored in Africana Studies, and earned a law degree from George Washington University.

Since Conway's promotion last July to associate vice president and chief operating officer, she has been responsible for the day-to-day operations of Human Resources, with direct oversight of Business Services, HR Finance, Payroll Shared Services, Benefits, Compensation, Human Resources Information Systems, and Talent Management. She also has had budget responsibility for an annual operating budget of $20 million and an annual benefits budget of $450 million.

"In her more than 10 years at JHU, Heidi has proven herself to be an enthusiastic, capable, and well-respected leader," Ennis said. "Looking toward the future of JHU HR, I am excited to see Heidi build on Charlene's many contributions in this role and capture new opportunities to distinguish the university's support of our faculty, staff, and trainees."

Conway came to Johns Hopkins in 2005 as senior director of Benefits. Previously, she held several roles of increasing responsibility in Human Resources at Harvard University, serving most recently as associate director. She holds a Bachelor of Arts degree in business administration from New England College and a Master of Science degree in administrative studies from Boston College.