With warm weather having finally arrived, taking a short stroll that goes past a number of Homewood's public artworks is a lovely way to get outside and tour the campus and its environs.

Though the schools of Engineering and Arts and Sciences moved from downtown Baltimore to Homewood in 1914 and 1916, respectively, it would take another 20 years before the campus started to become dotted with statues, monuments, and other public arts pieces commissioned, donated, or lent to the university by individuals, alumni and student groups, and private organizations.

This sculpture walk largely skirts the Krieger Hall waterproofing and colonnade restoration project that is taking over the Keyser Quadrangle, and it runs roughly 1.25 miles (about 2,700 steps, for those who count such things), a distance you can cover at a casually brisk pace in about 20 minutes.

Take a look at the map. 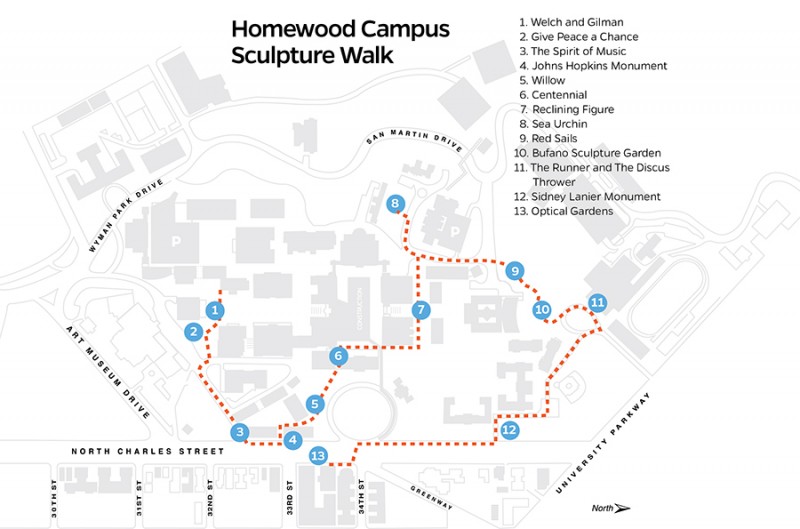 1. William H. Welch and Daniel Coit Gilman
Start at Shriver Hall, where a pair of bronze statues flanks the auditorium's entrance. To the left is William H. Welch, one of the four founding physicians of the Johns Hopkins Hospital and the first dean of the School of Medicine; to the right is Daniel Coit Gilman, the university's first president. Both statues were sculpted in 1956 by Sidney Waugh, who at the time was director of the Rinehart School of Sculpture at the Maryland Institute College of Art. The statues were the gift of the hall's namesake, alumnus Alfred Jenkins Shriver, as part of the bequest he left to the university upon his death in 1939.

2. Give Peace a Chance
Turn left and head down the path past Shaffer Hall. On the south side of Shriver Hall is Give Peace a Chance, a burnished aluminum sculpture made by alumnus Theodore C. Scuris and a gift from the Class of 1970.

3. The Spirit of Music
Continue toward Charles Street, keeping the BMA's sculpture garden to your right. At the south end of the Mattin Center is Jud Hartmann's The Spirit of Music, a memorial to undergraduate Rex Chao, who was shot and killed by a classmate in 1996. Hartmann's sculpture depicts Chao, who played violin in the Hopkins Symphony Orchestra, seated with his instrument resting on his leg. The memorial is a gift from the Rex Chao Memorial Committee, which was started by a group of undergraduates.

4. Johns Hopkins Monument
Continue to Charles Street and turn left, heading north. At the east side of the Mattin Center is Hans Schuler's bronze and marble Johns Hopkins Monument, a gift from the Baltimore Municipal Art Society to the city and installed in 1935. It includes a bust of the university and hospital founder flanked by two seated figures—to his left, a male figure who represents knowledge and the university and to his right, a female who represents healing and the hospital. The city owns and maintains this work.

5. Willow
Turn left at the Hopkins Monument, enter the Mattin Center's plaza, and go up the first set of stairs to the right. At the top, look over to the right and take in Martin Kline's Willow, a gift of Stephen Mazoh, KSAS '62, in memory of Ronald P. Fish. The sculpture is a bronze cast of a tree stump topped with encaustic.

6. Centennial
Continue on the path toward the Milton S. Eisenhower Library. Climb the steps and proceed to the patio between the MSE and the Brody Learning Center. David Lee Brown's chrome-plated steel Centennial, a gift from alumnus, philanthropist, and collector Robert Levi and his wife, Ryda, in 1975 to commemorate the university's first century, rests in an enclave just below ground, visible from the M level of the library as well as from above.

8. Sea Urchin
Continue westward past Mergenthaler and veer left near Gilman Hall, passing around a short oval pathway to the Decker Garden, where Edward Berge's Sea Urchin stands in the center of the fish pool. Originally installed at Mount Vernon Place, it was donated to the university by the city of Baltimore and Paul Higinbothom and moved to Homewood in 1961.

9. Red Sails
Pass through the Decker Garden and head down Bowman Drive, with the Johns Hopkins Club to the left and sculptor John Henry's towering Red Sails straight ahead. This monumental piece is a gift from alumnus and trustee emeritus Ralph S. O'Connor and his wife, Becky.

10. Bufano Sculpture Garden
Continue following the brick path and pass through the shady Bufano Sculpture Garden, a collection of 10 stone composite recasts of granite and marble animal sculptures by Italian-American artist Beniamino Bufano. The sculptures were given to the university by six different donors over the years, the last by the estate of the artist's son, Erskine, in 2012.

12. Sidney Lanier Monument
Continue around the roundabout in front of the athletic center and veer left onto the path that runs by baseball's Babb Field at Stromberg Stadium and past the tennis courts, and turn left toward Charles Street. On the left is Hans Schuler's bronze monument to Sidney Lanier, the Southern poet who began lecturing on English verse at the university in 1879 and who died two years later at age 39.

13. Optical Gardens
Turn right and take the sidewalk south on Charles Street, crossing over to the east side of the street at the crosswalk in front of the library. Turn right and proceed about one block to Haddad/Drugan's Optical Gardens, an installation that was commissioned by the Baltimore City Public Art Commission and was inspired by the university and the Charles Village neighborhood where it resides.