Hopkins looks to the sun on clean energy projects 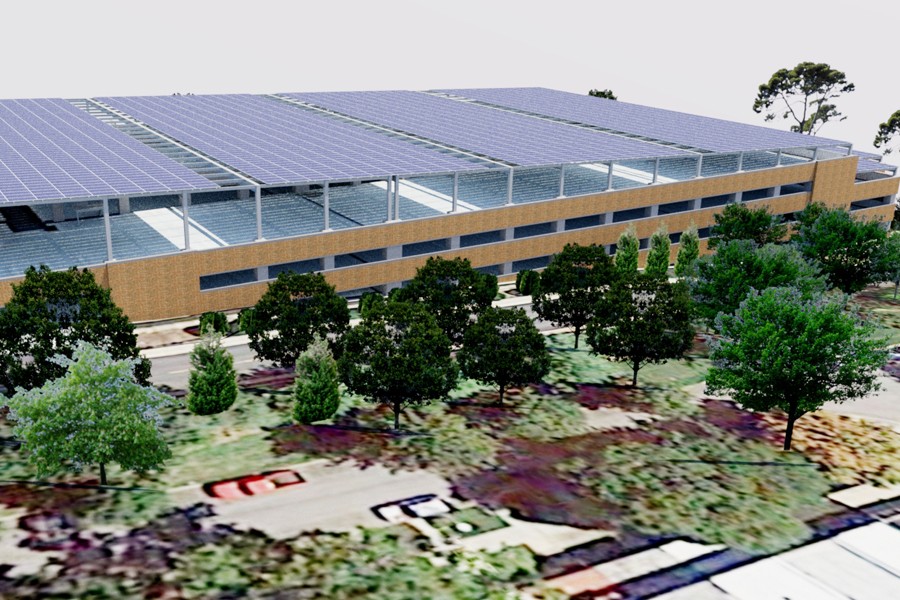 Image caption: A CAD-generated rendering of the Keswick Garage shows the raised solar-panel structure that will be constructed starting in January.

Johns Hopkins is just about ready to up the ante with solar energy. As the new year begins, the university will be adding 6,519 new solar panels atop buildings at Keswick and Mount Washington. 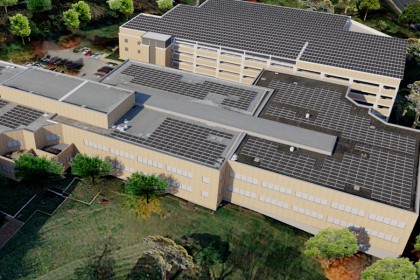 Image caption: On the Mount Washington campus, solar panels will be installed atop the Davis Building and its adjacent garage.

The project is expected to generate more than 2,670 megawatt hours of electricity a year—which would be enough to supply 240 average homes with power. At the Keswick Garage and the Davis Garage at Mount Washington, solar canopies will be built as free-standing raised structures above the parking, not only producing clean, renewable energy but also protecting cars from the elements, including snow in the winter months. Also at Mount Washington, a cluster of new solar panels will be installed atop the Davis Building.

All three projects are slated to begin in January, with the solar panels up and running by April.

The installations mark the second round of a sweeping solar energy initiative that Johns Hopkins launched in 2012. The first phase—believed to be the largest rooftop solar project in Baltimore City—added nearly 2,900 panels to the tops of seven university buildings.

With the new project, Hopkins expects to see its greenhouse gas emissions drop by the equivalent of more than 3,500,000 pounds of carbon dioxide a year. To put things in perspective, that's equal to the emissions from 337 passenger vehicles, or consuming 180,000 gallons of gasoline each year.

Hopkins' Office of Sustainability initiated the solar panel project, with Transwestern (which manages the two campuses for Johns Hopkins) and a team of partners in charge of financing, installing, and maintaining the panels.

The project brings the university another step forward in its pledge to reduce greenhouse gas emissions by 51 percent by 2025. "Identifying and seizing opportunities to produce clean, renewable energy on-site is more than just symbolic," says Ashley Pennington, program manager for the Office of Sustainability.

As of last spring, Hopkins had already reported a 35 percent reduction in emissions, according to its five-year sustainability progress report. One factor behind that achievement was the 2012 phase of the solar initiative, which has produced more than 37,1500 kilowatts of energy to date. (The JHU Solar Dashboard provides real-time feedback on this data.)

That round of the project brought solar panels to the rooftops of Homewood's Ralph S. O'Connor Recreation Center/Newton H. White Athletic Center and Mattin Center; Johns Hopkins at Eastern; and, in East Baltimore, the School of Medicine's 2024 E. Monument St. building, the School of Nursing's Anne M. Pinkard Building, and the Bloomberg School of Public Health's Wolfe Street and Hampton House buildings.

The university, through Transwestern, works out its solar power arrangement through a partnership with Hecate Energy, Eastlight Renewable Ventures, and Pfister Energy. Hopkins leases roof space to Hecate, which owns the solar panels and sells the electricity generated to Hopkins. The university also remains a customer of Baltimore Gas & Electric, with power from the local utility kicking in on cloudy days and at night; conversely, when the solar panels produce a surplus of energy, that's returned to the BGE power grid.

"Implementing projects that conserve or produce energy makes us more resilient as an institution," Pennington says. "In the end, sustainability just makes sense."