Andrew F. Conn, a retired senior lecturer in the Department of Mechanical Engineering who played a pivotal role in creating and expanding the senior design course that is the department's capstone undergraduate design experience, died of cancer Nov. 6 in Baltimore. He was 80 and lived in the Village of Cross Keys. 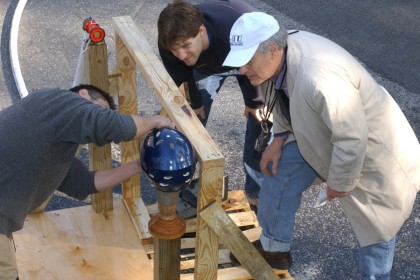 A leading expert in the development of high-pressure water jets for industrial applications, Conn worked for Sweetheart Cup as an engineer before joining the Howard County research and development firm Hydronautics.

In 1988, Conn, who received both his undergraduate and doctoral degrees from Johns Hopkins, was recruited to come to the Whiting School of Engineering as an adjunct professor in Mechanical Engineering by the department chair, William Sharpe, who had been a graduate school classmate.

Conn developed a new Capstone Senior Design Class in which teams of three or four students designed and built a prototype for industrial sponsors. Not only did he teach the course, he arranged for each sponsorship. According to colleagues, he especially enjoyed meeting weekly with each team and personally guiding its members' development. Conn was known as an "engineer's engineer" with consummate skill in design engineering and design pedagogy. He was beloved by students, colleagues, and staff.

"Dr. Conn was a real go-getter who was excellent at bringing in impressive Senior Design sponsors, from places doing defense work to others doing biomedical projects, all of whom provided our students with important experiences working on real-world engineering problems," Douglas says.

Speaking to the Baltimore Sun about his father, David Conn said, "For him, this wasn't just community or scientific work, it was deeply creative work. He believed in harnessing his knowledge in the service of creating solutions to help people. His best years were spent helping Hopkins engineering students design solutions for real-world problems."

Conn retired from Johns Hopkins in 2012 but continued to volunteer with Senior Design sponsor V-LINC, a Baltimore-based nonprofit that aims to create technological solutions to improve the lives of people with disabilities. In 2014, he was named V-LINC's volunteer of the year.

Conn is survived by his wife of 18 years, Barbara Taylor, and his two sons, Lawrence (Barbara) Conn and David (Amanda) Conn, and their children. His first wife, Elinor "Ellie" Conn (nee Schwartzman), to whom he was married for 38 years, died in 1996.