Leon Gordis, a longtime member of the Bloomberg School's faculty and chair of its Epidemiology Department for nearly two decades, died Sept. 7 in New York of a subdural hematoma. He was 81. 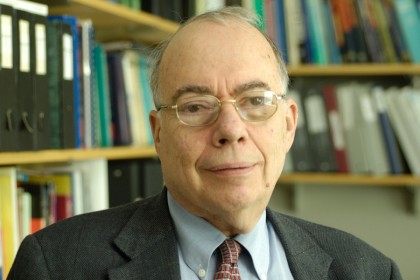 In an email informing the Bloomberg faculty of Gordis' death, Dean Michael Klag remembered that Gordis was one of the first faculty members he met when he first came to the school, in 1984, to attend the summer epidemiology program. "Then, and always, he was incredibly welcoming and supportive of students," Klag said.

"Leon was passionately committed to the department, teaching epidemiology, and to the School of Public Health. He was a master teacher who had just recently finished the fifth edition of his textbook, Epidemiology, a book used around the world. His lectures were models of clarity and communication, infused with humor," Klag said.

"Leon also built and strengthened bridges with the School of Medicine," he noted. "For many years, he personally taught the introductory course for medical students and, after stepping down as chair of the Department of Epidemiology in the Bloomberg School, served as associate dean for admissions and academic affairs in the School of Medicine. The Welch Center for Prevention, Epidemiology, and Clinical Research—a center that has enriched our school as well as the schools of Medicine and Nursing—would not have been realized without Leon's vision and commitment to collaboration."

Gordis received undergraduate degrees from Columbia University and the Jewish Theological Seminary and his medical degree from the SUNY Downstate Medical Center. After he completed a residency in Pediatrics at the Jewish Hospital in Brooklyn, New York, he served in the U.S. Public Health Service and was concurrently a fellow in Pediatrics at Johns Hopkins and Sinai hospitals. He received his MPH in 1966 from the Johns Hopkins School of Hygiene and Public Health (now the Bloomberg School of Public Health), followed by his DrPH in 1968. He joined the Johns Hopkins faculty in 1971 and chaired the Epidemiology Department from 1975 to 1993, when he stepped down.

In 2012, the School of Public Health and the Krieger School of Arts and Sciences established the Gordis Teaching Fellowship in recognition of his commitment to excellence in teaching. Named in honor of the then professor emeritus of epidemiology and director of the Johns Hopkins Robert Wood Johnson Clinical Scholars Program, the fellowship was designed to enrich the Krieger School's undergraduate curriculum with innovative courses that highlight trends and topics in public health. It also created new teaching opportunities for doctoral students and would allow undergraduates the opportunity to take seminar-size classes that build on their foundation courses.

In 2000, when Gordis was recognized for his teaching with the fifth of his six Alumni Association Excellence in Teaching Awards (called Golden Apples in the Bloomberg School), he told The Gazette that he estimated he had by then shown about 10,000 public health and medical students how researchers track the incidence and prevalence of diseases and investigate the causes of diseases and the basis for their prevention.

Following his retirement in 2009, the longtime Pikesville resident moved with his wife to Jerusalem, where he taught epidemiology and continued to edit his book. He returned to Baltimore to participate in the summer epidemiology program, known formally as the Graduate Summer Institute of Epidemiology and Biostatistics.

Gordis is survived by his wife, Hadassah; three sons, Daniel, Elie, and Yoni; eight grandchildren; and one great-grandchild.