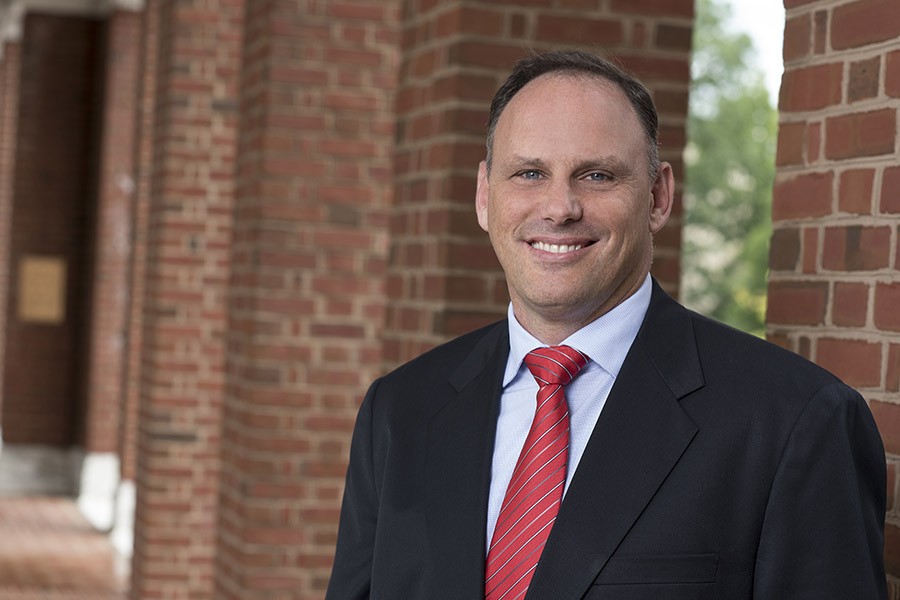 After logging 30 years with the U.S. Navy, in far-flung spots across the world, Robert McLean is about to settle down into civilian life. On Aug. 17, the retiring captain will join Johns Hopkins University as the new vice president for real estate and facilities, overseeing the school's sizable property portfolio in Baltimore and beyond.

For McLean, who goes by Bob, that means planting roots in one place for the first time in decades. During his time with the Navy, he's been stationed in Japan, California, Tennessee, England, Hawaii, and Mississippi, as well as the D.C. region and now Italy. "I've been blessed," he says of his travels, which he's shared with his wife and two kids, who "have lived all over the world, eaten all sorts of food" and, in his wife's case, learned new languages. (McLean says she's more of the linguist, while he has an engineer's brain. "I can say a few words and ask for the bill.")

He's also lived through some adverse situations abroad, such as the earthquake and tsunami that devastated Japan in March 2011, when he was based in Yokosuka as a commanding officer. "It was one of the more demanding times as a leader," McLean says. "We were supporting a very difficult mission, helping families that wanted to leave, and taking care of the team that stayed," all the while grappling with uncertainty from the radiological fallout.

Right now McLean and his family are living in Naples, Italy, where he's served for the past two years as commanding officer for the Naval Facilities Engineering Command that covers Europe, Africa, and Southwest Asia. The job has involved frequent travel, with McLean taking care of real estate deals, developments, and facilities across 30 countries. Recently, he's been regularly visiting Djibouti, on the Horn of Africa, watching over progress on the $500 million redevelopment of Camp Lemmonier. Previously in Japan, he oversaw Navy facilities in the Far East.

McLean says he believes this experience can translate well to the university setting. As head of Facilities and Real Estate at Hopkins, he'll be shepherding projects in the university's 20 million square feet of property in various spots across Maryland and D.C. "They're more similar than people think," he says of the military vs. civilian roles, citing "the portfolio of facilities, the nature of responsibilities," and the collaboration across a broad range of stakeholders that, he says, is essential to successfully managing projects "from cradle to grave."

McLean's new job also will involve overseeing Hopkins' ongoing major development projects, such as the new mixed-use building at 3200 St. Paul St. in Charles Village and FastForward East, the new innovation hub in East Baltimore. He'll also be in charge of creating a strategy to expand development on the university's Montgomery County Campus and nearby 100-acre Belward property.

McLean says that of all his past homes, the D.C./Baltimore region is the one he "knows the best," after attending the Naval Academy in Annapolis (he majored in mechanical engineering), obtaining a master's degree from Catholic University, and more recently working at the Pentagon for the second time. He also lived for two years at Camp David in Frederick County, Maryland, directing operations at the presidential retreat during George W. Bush's administration.

At Hopkins, McLean succeeds Alan Fish, who is relocating to Madison, Wisconsin. Fish, who joined the university in January 2012 as its first vice president for real estate and facilities, has overseen a number of major projects, including the Undergraduate Teaching Labs, Malone Hall, and Brody Learning Commons at Homewood and the Henderson-Hopkins School in East Baltimore.

McLean will take the reins of a division with 300 employees, an annual operating budget of more than $74 million, and an average annual capital budget of $200 million.