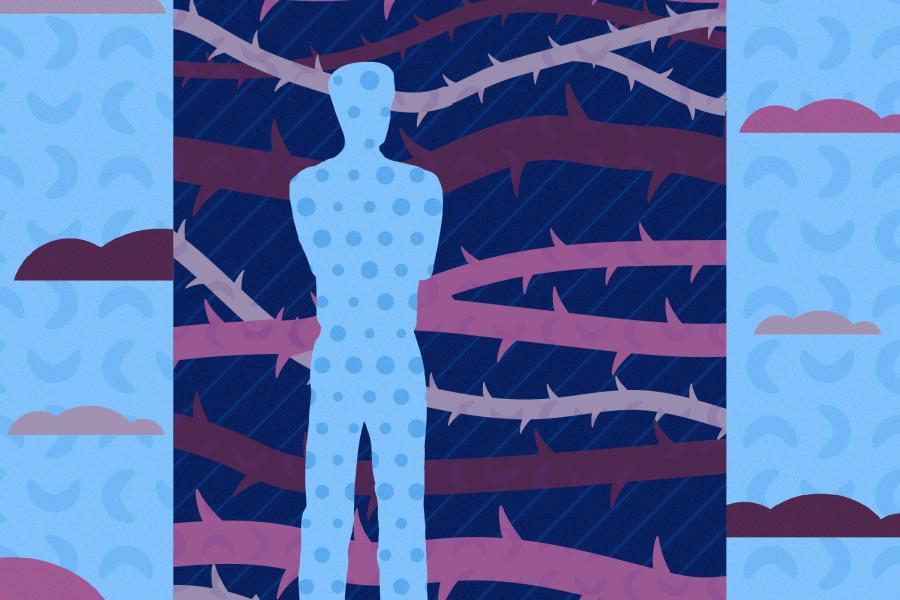 As part of the university's Racism and Repair in the Modern Academy project, Johns Hopkins researchers look inward at the past, present, and future of treatment for this disease.

It would seem an unlikely pairing. One, pediatric hematologist Lydia Pecker, raised in Brooklyn and trained in the Bronx and Washington, D.C. The other, Lauren Anthony, recruited from Edmond, Oklahoma, to play volleyball for Johns Hopkins. But they connected through a shared interest in a knotty intersection of race and medicine—sickle cell disease.

Pecker has provided clinical care for people with the disease and been involved in related research for more than a decade, while Anthony, A&S '22, wrote her senior paper about sickle cell trait testing in the 1970s, with support from the Hugh Hawkins Research Fellowship. Now, they've broadened their focus. Together, they're examining the long history of sickle cell research and treatment at Johns Hopkins. Their work is part of the university's Racism and Repair in the Modern Academy project, with funding through the Johns Hopkins Program in Racism, Immigration, and Citizenship.

"One thing we're seeing is that a lot of things about sickle cell disease have not changed. It's still a racialized disease. It's still a disease with tremendous health care disparities," says Pecker, director of the Young Adult Clinic in the Johns Hopkins Sickle Cell Center for Adults.

She points out that while Johns Hopkins has played a leading role in advancing sickle cell research and treatment, traditional methods of financial support, such as grants and philanthropy, have lagged significantly behind funding for other diseases.

"One thing we're seeing is that a lot of things about sickle cell disease have not changed. It's still a racialized disease. It's still a disease with tremendous health care disparities."
Lydia Pecker
Director of the Young Adult Clinic in the Johns Hopkins Sickle Cell Center for Adults

"Decisions about how and whether to address sickle cell disease with funding and clinical care were made decades and decades ago and they affect care and research today," Pecker says. "If we're going to write a new story for sickle cell disease, I think understanding what's happened in the past is critical."

Sickle cell anemia is a condition in which red blood cells, instead of staying round and soft, become curved and rigid. The cells clog the bloodstream and cause oxygen deprivation that can result in episodes of intense pain and both nerve and organ damage.

The first medical paper about a blood sample showing "sickle-shaped and crescent-shaped" red blood cells was published in 1910. But it wasn't recognized as a disease until 1922 when Verne Mason, a 1915 graduate of the School of Medicine and then a medical resident at Johns Hopkins Hospital, named it sickle cell anemia.

That was a notable advance, but Pecker points out that Mason and his peers prematurely identified sickle cell as a disease because they claimed that it was unique to Black people, a position reflecting the race-based thinking and ideologies that were common in the medical community, including Johns Hopkins, at the time.

"Of course, sickle cell disease affects people with all different skin colors," she says. "It's a genetic disease, not a race disease."

About 20 years after Mason's publication, a Johns Hopkins medical student named Irving Sherman, A&S '36, Med '40, noticed birefringence in red blood cells from patients with sickle cell disease. When he published this observation, he did not know how to interpret this finding. Linus Pauling understood the significance and a decade later, in 1949, Pauling and a team of researchers at the California Institute of Technology published a groundbreaking paper concluding that sickle cell anemia is a genetic disease attributed to the abnormal chemical structure of a protein. 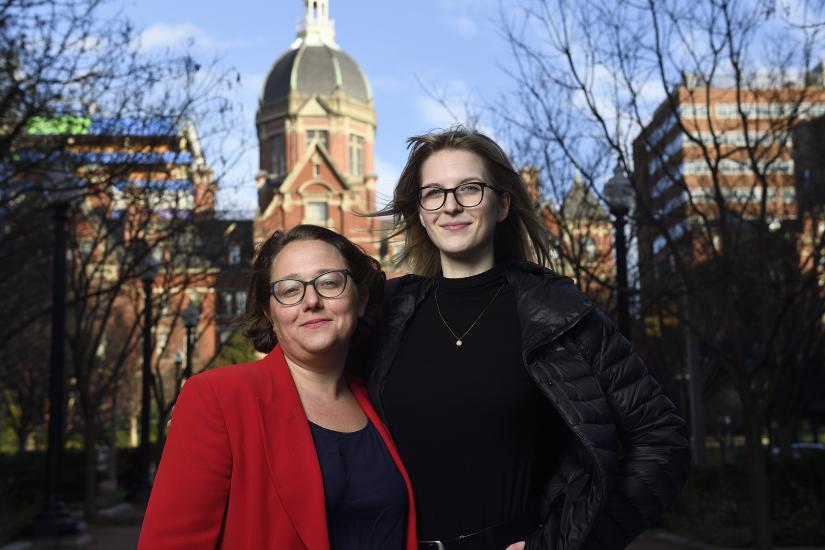 Still, it wouldn't be until 1972 that Congress passed the National Sickle Cell Anemia Control Act, which authorized federal funding for research, treatment, counseling, screening, and educational programs. The legislation undoubtedly raised the profile of sickle cell disease in both the medical community and the general public, but a truly effective treatment was still decades away.

That breakthrough also had its roots at Johns Hopkins, specifically a 1995 study published in The New England Journal of Medicine with results so promising that the National Institutes of Health stopped early a clinical trial involving the use of the drug hydroxyurea to treat sickle cell anemia. The agency saw no need to continue the research and instead sent a notice to thousands of doctors worldwide informing them of hydroxyurea's effectiveness.

It was found that hydroxyurea could increase the production of fetal hemoglobin in people with sickle cell disease. That prevented clumps of sickle-shaped cells from forming in the bloodstream. While it didn't provide a cure, a daily dose could significantly decrease the frequency and severity of the pain and tissue damage they experienced.

The research traces its roots to Samuel Charache, a hematologist and professor of medicine at Johns Hopkins. A native of Brooklyn and a graduate of the New York University School of Medicine, Charache joined the Hopkins faculty in 1966 and became director of the hospital's hematology laboratory three years later. In the late 1960s, Charache began treating a young Baltimore man named John Paul Jr. who'd had sickle cell anemia.

The disease had been so debilitating and distressing that, as a 14-year-old boy, John was on his way to jump off a bridge before his mother was able to stop him. He later said he never knew when the pain would start or where he would feel it. Sometimes, it came from deep inside his body, other times from behind his eyes. He even occasionally felt it in his tongue.

His mother, Vivian Paul, launched a desperate search for a doctor who truly understood what her son was going through, eventually connecting with Charache, whose nickname "Sickle Sam" reflected not only his expertise but also his empathy for those who had the disease. It was the beginning of a 28-year doctor/patient relationship. 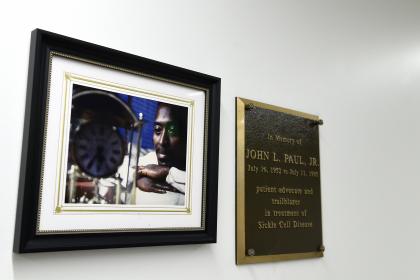 When Charache suggested treating him with hydroxyurea, a trusting and well informed John agreed to become the first sickle cell patient to use it for that purpose. Soon his younger brother, Donald Brett, who also had the disease, began taking hydroxyurea. In time, the drug's impact was obvious. At their worst, the painful attacks had occurred monthly and could last for two weeks. With hydroxyurea, John was able to go months, and eventually years, without a painful crisis.

"What we see in this history," Pecker says, "are brave patients, stuck with a really bad disease. They were suffering. And they decided they could trust their doctor because of how he spoke to them, how he cared about them."

It's a story that resonates with Anthony, both for the courage of the patients in risking a new treatment and for the dedication John Paul and Charache had to each other in paving a new path together.

"It's something that I hope to emulate as a physician one day myself," says Anthony, who plans to attend medical school.

Another breakthrough in treating sickle cell anemia came in 2012, when a team of researchers led by Robert Brodsky, director of the Division of Hematology at the Johns Hopkins School of Medicine, showed that even partially matched bone marrow transplants could cure some patients of the disease by replacing "sickled" blood cells with healthy ones. Because anyone with a sibling, parent, or child has a genetic half-match, the procedure has made bone marrow transplants available to a high percentage of people with the crippling disorder.

"I think the extent of most people's knowledge about sickle cell is that it disproportionately affects African Americans," Anthony says. "But they don't understand the effects it has. And I don't think people know how recent the treatments are."

For both Pecker and Anthony, a critical aspect of serving sickle cell patients is providing a place where their condition and its physical and emotional effects are clearly understood and carefully managed. When their only option for dealing with episodes of severe pain is rushing to an emergency room for opioids, they run the risk of slower treatment and longer hospitalization—not to mention being suspected of faking pain to get access to drugs.

That's why the university's Sickle Cell Center for Adults' Infusion Clinic, which was founded by Sophie Lanzkron in 2008, and has become a model for others around the country, is so valuable, Pecker says.

"I think the extent of most people's knowledge about sickle cell is that it disproportionately affects African Americans. But they don't understand the effects it has. And I don't think people know how recent the treatments are."
Lauren Anthony
graduate student

"In the infusion center, our care team knows the right way to treat these patients," Pecker says. "They each have individualized care plans, so [medical professionals] get the right medicine to the right patients.

"If you can imagine being a patient in horrible pain," she continues, "and then you have to get care in an unpredictabile and stigmatizing care environment, as is sometimes encountered in emergency departments. It makes it worse."

Anthony described the role of the clinic as transformative.

"It's how it helps people navigate their treatment," she said. "You know, in an ER, they can be shoved aside and told they'll be fine. But in the infusion center, they're immediately treated, and they feel more comfortable."

Hopkins researchers are also studying the use of the drug buprenorphine to treat sickle cell patients with complex chronic pain.

Yet for all the progress made, both Pecker and Anthony feel it's important for more people to know how we got here.

"I don't think people with sickle cell disease or their families get the recognition for the incredible courage they have and the incredible suffering they experience," Pecker says. "I think the history also teaches us about the deeply altruistic choices some really brave patients made to help make things better for other people. That's a very powerful story."