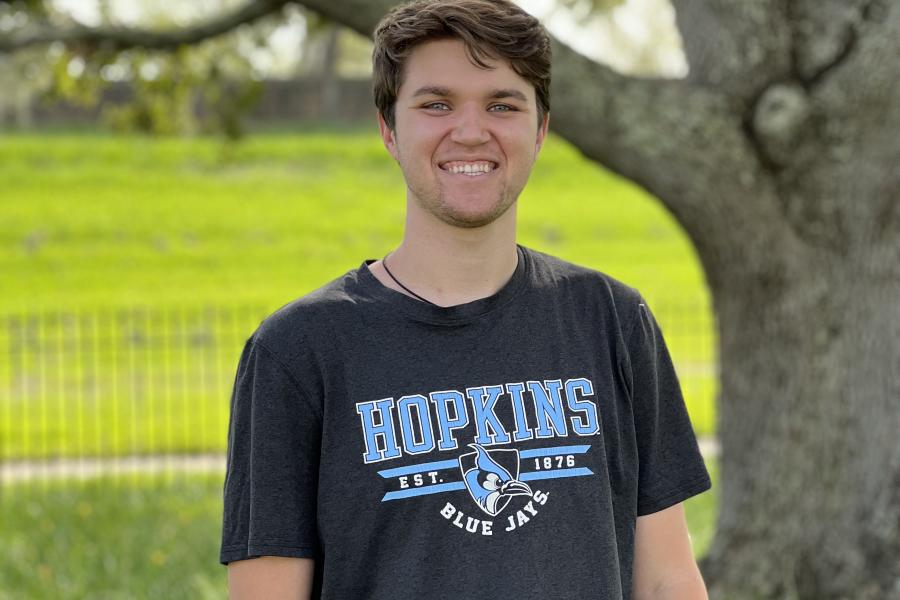 The scholarship, provided by the British Government, will support 2022 graduate Nathan Mudrak as he pursues a doctoral degree at the University of Oxford

Nathan Mudrak has always enjoyed working with and learning from children. Through his experiences mentoring children in educational settings and advocating for them in his three years of work with Hopkins Community Connection, he's seen the promise of the next generation. And it's because of those experiences that he's working to ensure children have the chance to fulfill their promise, with a goal of becoming a clinician-scientist in pediatrics to aid them in that fight. His next academic endeavor will allow him to do just that: he'll be gaining critical training and experiences at the University of Oxford through the Marshall Scholarship.

Mudrak, who graduated from Johns Hopkins in the spring of 2022 with a joint BS and MS degree in molecular and cellular biology, is one of 40 U.S. students who have been named to this year's class of Marshall Scholars, giving him the opportunity to pursue his Doctor of Philosophy degree in pediatrics at Oxford over the next three years.

"It is truly an honor to receive this award and to be recognized amongst so many amazing and inspiring people. Being named a Marshall Scholar is incredibly affirming, and I'm so excited about the doors this award and the Oxford experience will open in my pursuit of a career furthering pediatric health equity."
Nathan Mudrak
2022 Hopkins graduate

"Infectious disease is the leading cause of childhood mortality globally," says Mudrak, who served as president of his class. "With most of these deaths caused by preventable illness, I find great fulfillment and motivation in studying to combat these statistics, to prevent the preventable, and this scholarship will provide me with critical training and experiences which will best enable my successful pursuit of this path."

The Marshall Scholarship, founded in 1953, is a competitive annual award funded by the British government that allows exceptional undergraduate students and recent graduates from the United States to pursue postgraduate studies in the United Kingdom, with the goal of strengthening the British-American relationship. The award began as a co-educational opportunity and was among the first British-American scholarship programs to be offered to both men and women.

Mudrak says he wasn't considering the Marshall Scholarship until he traveled to London earlier this year. After researching the opportunity further, he discovered the scholarship's record of supporting impactful researchers in academia, and with the importance of global collaboration opportunities underscored by the COVID-19 pandemic, Mudrak knew the chance to study with global thinkers would be crucial to his multidisciplinary view of infectious disease.

"Whether through attending debates at the Oxford Union, conversing with a peer in my college's dining hall, or witnessing state-of-the-art global clinical trials, I seek to understand all the ways—scientific, political, or otherwise—to ensure all have access to high-quality care," Mudrak says.

Mudrak's trip to London earlier this year was his first trip abroad, and he's looking forward to returning—both for the academic opportunity and for the chance to continue to explore the arts scene in the U.K. Growing up taking ballet classes and participating in musical theatre, he looks forward to taking in performances on the West End, at the Royal Ballet, and beyond.

After completing his studies at Oxford, Mudrak plans to return to the U.S. to pursue a medical degree. He hopes to use the broadened perspective offered by both degrees to work on biological innovations that combat social disparities and health inequity and that increase access to existing therapeutics, such as the low-cost point-of-care tuberculosis diagnostics he plans to research at Oxford.

"It is truly an honor to receive this award and to be recognized amongst so many amazing and inspiring people," Mudrak says. "Being named a Marshall Scholar is incredibly affirming, and I'm so excited about the doors this award and the Oxford experience will open in my pursuit of a career furthering pediatric health equity."

For more information about applying for the Marshall Scholarship through Johns Hopkins, visit the National Fellowships Program website