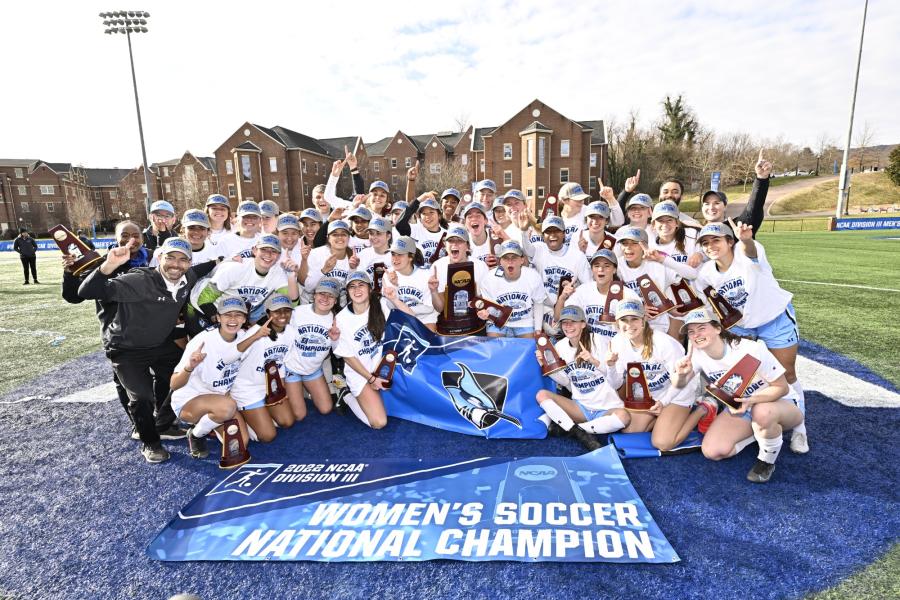 The second-ranked Johns Hopkins women's soccer team got goals from Breukelen Woodard and Katie Sullivan and held off No. 4 Case Western for a 2-1 victory in the NCAA Division III national championship game in Salem, Virginia, on Sunday.

The win capped an unbeaten season for the Blue Jays, who finished 23-0-2 en route to winning their first national title.

It was the latest crowning achievement in what has been a remarkable run for Hopkins women's fall sports in recent years. JHU's women's cross country team won a record eighth NCAA championship since 2012 two weeks ago, the volleyball team won its first-ever national championship in 2019, and the field hockey team has advanced to the national title game in each of the past two seasons.

Now the women's soccer program has an NCAA championship trophy of its own in just its second trip to the NCAA Final Four.

Hopkins got on the board first Sunday in the 14th minute when Rachel Jackson slipped a pass to her right that Woodard settled and fired low past the outstretched hands of Spartans goalie Maggie Storti. Woodard's seven goals in six NCAA tournament games are one shy of the Division III record.

‼️GOAAAAAL‼️@HopkinsWSoccer #4 Breukelen Woodard finds the back of the net with and assist from #20 Rachel Jackson.

Case Western (20-1-1) pulled even just over 20 minutes later when they struck in transition. Senior Aniya Hartzler fired a low shot that JHU goalkeeper Emma Huntzinger saved, but Hartzler corralled the loose ball and slipped a 5-yard left-footed shot into an open net for the equalizer.

The decisive goal for the Blue Jays came in the 50th minute when Woodard carried the ball through midfield, then found Maria Romo-Nichols in space to her right. Romo-Nichols cut back to edge of the penalty box before slotting a pass to a cutting Sullivan, who one-timed the feed just under the crossbar from 10 yards out.

ANOTHER ONE 🗣️@HopkinsWSoccer takes the 2-1 lead with a goal by #15 Katie Sullivan and an assist from #11 Maria Romo-Nichols.

From there, Hopkins held off the Spartans for the remainder of the half, with Jackson saving a dangerous shot off the line at one point.