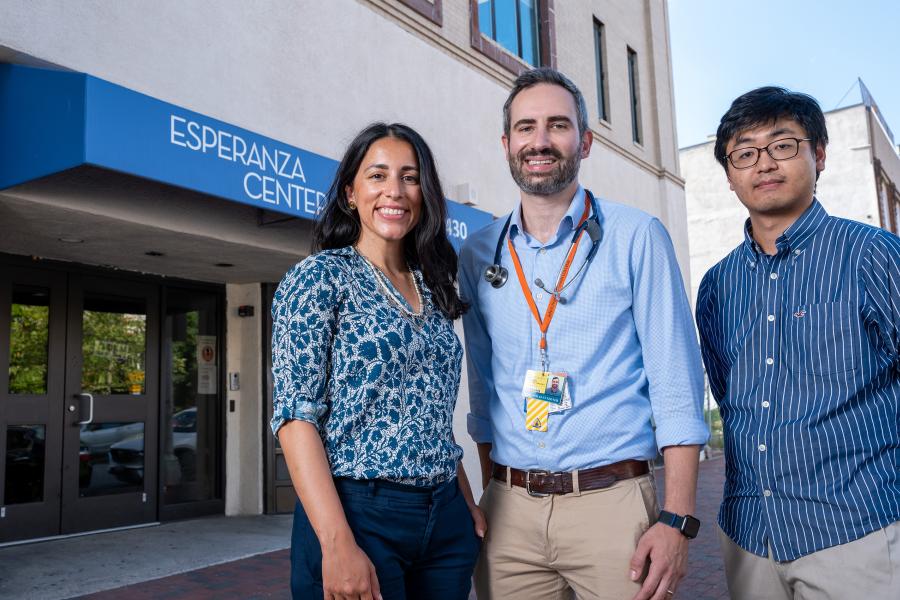 The Johns Hopkins, Esperanza and Loyola Refugee Health and Asylum Collaborative provides refugees with trauma-informed care and helps prepare affidavits to include in asylum applications

A toddler asks her mother if she can play with a small collection of toys stashed in the corner of a waiting room:

Bent over a clipboard that holds a thick questionnaire, the girl's mother gives her permission—on the condition she doesn't make a mess.

The woman and her daughter have come to the Esperanza Center in Fell's Point on a steaming July evening. They arrived in Baltimore a few days prior, traveling 3,000 miles from their home in El Salvador, where they lived under a constant threat of violence from gangs and organized crime. At the Esperanza Center, they'll have a forensic evaluation that they hope will bolster their case to remain in the U.S., safely away from the dangers they fled.

Located in a nondescript building on South Broadway, the Esperanza Center offers assistance to immigrants from countries around the world. Center staff members and volunteers provide health care for people who don't qualify for government benefits. They also help clients navigate social service agencies to find job training and employment, English classes, housing, and other services.

Since late last year, the center has also been home to the Johns Hopkins, Esperanza and Loyola (HEAL) Refugee Health and Asylum Collaborative, a Johns Hopkins-based partnership that assists people displaced from their home countries to find safety in Maryland. Among the collaborative's founders is Johns Hopkins physician C. Nicholas Cuneo, who began working with refugees in Baltimore while a student at the Johns Hopkins University School of Medicine. In 2011, he co-founded the Refugee Health Partnership, which pairs teams of medical students with recently resettled refugees to provide health care advocacy, mentorship, and navigation.

After graduating from medical school in 2015, Cuneo completed a combined residency in internal medicine and pediatrics at Brigham and Women's Hospital and Boston Children's Hospital. He also earned a master's degree in public health from Harvard University in 2020. As global health equity chief resident there, he trained in forensic evaluation of asylum seekers at Massachusetts General Hospital and worked at the southern U.S. border in Tijuana, Mexico.

In the summer of 2020, Cuneo returned to Johns Hopkins as an assistant professor of medicine and pediatrics. At the top of his to-do list was starting Baltimore's first comprehensive refugee health and asylum clinic. He partnered with Nouf Bazaz, a clinical assistant professor of counseling at Loyola University Maryland who focuses on refugee mental health. Cuneo also turned to the many medical students active in the organization.

"The Refugee Health Partnership was sort of the fuel that brought me to my current career trajectory," says Cuneo, whose research on trauma and violence among asylum seekers has been published in several science and medicine journals. In what he calls "a full-circle moment," Cuneo is now the faculty adviser to the partnership he founded a decade ago.

Bazaz's clinical work and research focuses on trauma, torture, grief, and loss experienced by survivors of war, violence, and persecution, and she directs the HEAL collaborative's mental health programs. Bazaz and Cuneo met in 2012 when both worked at the International Rescue Committee's Baltimore office.

People are referred to the collaborative's programs, including its asylum clinic, through various nonprofit relief and legal service organizations such as Asylee Women Enterprise and Kids in Need of Defense. Each has an office in Baltimore. Since late last year, Cuneo and his team have received referrals from more than a dozen organizations seeking help for their clients.

Staff members and volunteers from partnering institutions have connected to form forensic evaluation teams for the many migrants who have, for one reason or another, landed in Baltimore seeking asylum or other forms of humanitarian protection.

When seeking asylum, the burden falls on the applicant to demonstrate harm.

"Often, the best way to achieve that is through an extensive forensic physical or psychological evaluation to document any evidence of past trauma," Cuneo explains. "We use forensic evidence to corroborate the reported trauma narrative."

Cuneo and Bazaz are trained to conduct these evaluations in a manner that is "trauma informed." They try to minimize further suffering that might come from discussing or reliving the trauma that forced the clients out of their homes.

On this evening at the Esperanza Center, Johns Hopkins medical student J.J. Kim is a volunteer receptionist. He greets five clients—three are Spanish speakers, one speaks French, and one is a speaker of Ethiopian Amharic—and makes sure they understand what to expect. A trained evaluator, an assistant, and an interpreter are at each meeting with a client. All are volunteers and most are from Johns Hopkins.

Kim brings the Salvadoran woman and her daughter to one of the Esperanza Center's exam rooms. There, a team of trained volunteers will interview her about her experiences in her home country, her journey to the U.S., and other information. She'll also be examined by a Johns Hopkins physician who is trained to work with people who have experienced trauma. The assistant, a medical student, will take detailed notes during the evaluation and help draft an affidavit with the team's findings, which is then submitted to the client's attorney.

"There are reputable studies that have shown that applicants' chances of being awarded some sort of humanitarian protection, including asylum, more than double if they have a detailed affidavit," he says. "The national rate of approval is about 40%. But with an affidavit, it's almost 90%."

According to Cuneo, refugee experiences share one underlying factor: trauma.

"People come to us for a number of reasons," he says. "Some are gang-related persecution and gender-based violence cases. Some are related to anti-LGBTQ violence. And some are really profound political torture cases, which we're now seeing in droves from Ethiopia."

A war that began in 2020 in the northeast region of Ethiopia at the Eritrea border has left millions of residents vulnerable to detainment and torture, as well as rape as a weapon of war. Cuneo says that cases in which HEAL collaborative clients were held and tortured for long stretches of time can be especially hard for forensic evaluators to document accurately.

"It's often difficult to determine what injuries came from what encounter," he explains.

The collaborative has also received referrals for survivors of female genital cutting. Nicole Warren, a Johns Hopkins University School of Nursing associate professor, a certified nurse midwife, and an international FGC expert, has been recruited to direct forensic gynecology for these referrals.

Cuneo estimates that during the past year, Johns Hopkins has provided more than 80 HEAL collaborative volunteers to help in various ways. The volunteers include faculty members, medical residents, and students—both graduate and undergraduate. Many team up on cases.

"This is the kind of work that you really don't want to do alone," Cuneo says. "Some of the cases are so complex that it can be easy to miss important details, and it's emotionally intense. Having one or two other people in the [exam] room with you helps."

How does involving that many people affect the clients?

"In my experience, most clients really appreciate having a supportive team," Cuneo says.

The collaborative has attracted the attention and support of local philanthropies, including the Aaron Straus & Lillie Straus Foundation, the Abell Foundation, the Leonard and Helen R. Stulman Foundation, and the Goldseker Foundation. The collaborative has hired a program manager and a part-time program assistant to expand its support services, and in September, it received a five-year grant from the federal Office of Refugee Resettlement to begin providing direct medical and mental health care to survivors of torture in partnership with Asylee Women Enterprise.

"The outpouring of support has been humbling," Cuneo says. "It is clear that there was a major unmet need in the city that we are starting to meet through partnership and perseverance."