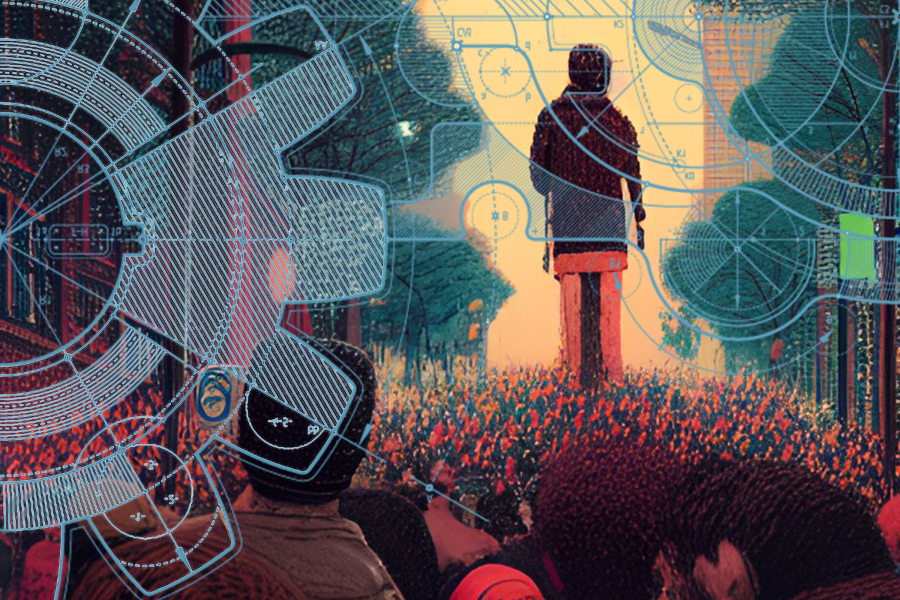 Johns Hopkins alum and instructor Sarah Hemminger was on a family vacation, standing on a cliff and gazing at the horizon. "Look at that sunset," she said to her eight-year-old daughter, Evie.

They went back and forth, each insisting on being right, when Evie finally made Hemminger turn around. There was the moon, bright as could be.

"Here she and I were, in the same spot on Earth, seeing something as different as the sun and the moon," Hemminger said. "And that happens in life often; we're so sure we see the sun that we don't create the space for the possibility that someone could be seeing the moon."

That lesson is at the heart of what Hemminger teaches Johns Hopkins undergraduates in her Social Justice for Engineers course—that there's always another perspective. Conceived during the pandemic, word of mouth made the Whiting School of Engineering course a popular remote class. This semester, the course was offered for the first time in person, and its 50 seats quickly filled up.

"The goal, at the highest level, is for the students to come out understanding themselves better and how to connect with others."
Sarah Hemminger
Social Justice for Engineers

The course comes from a partnership between the Johns Hopkins Department of Biomedical Engineering and Thread, a nonprofit Hemminger and her husband co-founded to connect high school students who struggle academically with volunteers from the academic and corporate worlds.

Through her work with Thread, Hemminger, an adjunct assistant professor in the Whiting School of Engineering who is herself an alumna of the BME program, found that students benefited most from volunteers who didn't lecture them but instead were vulnerable with them, which created deep bonds across the line of difference. "That reorientation became the rallying cry for Thread," Hemminger says.

Over the last decade, the team at Thread developed extensive content for bridging difference, which they discovered meant teaching people "to better understand themselves and their bias, their knowledge, their attitudes, and their beliefs," she says.

It turned out that the Department of Biomedical Engineering at Hopkins had a similar mission.

Biomedical engineering, or BME, uses engineering to solve problems in health care. "I have a facial deformity," says Hemminger, "and an implant allows me to keep my left eye open so I can see out of it. That implant is a medical device that a biomedical engineer likely created."

At the beginning of the COVID-19 pandemic, Michael I. Miller, a professor and director of the Department of Biomedical Engineering at Hopkins, reached out to Hemminger about creating a course.

"Inclusive excellence is critical to the Hopkins BME mission of advancing human health through scientific discovery, translational research, and innovation," says Miller. "As biomedical engineers, it is our responsibility to make our technologies as accessible as possible. To this end, we must have a clear understanding of the challenges—social, cultural, financial, technical, or other—impeding progress. The more we educate ourselves on these barriers, the more effective we can be at engineering innovative solutions and improving the quality of health care delivery for all."

Hemminger and Miller saw that social justice was integral to a BME education, especially considering the health care inequity in the country. For example, recent studies have shown racial and ethnic minorities in the U.S. receive worse health care, and those disparities result in worse health outcomes.

Part of the issue is bias by politicians, hospitals, physicians, and the engineers who design clinical equipment and medical devices. Some of the prejudice is intentional, Hemminger points out, like the push in some states to restrict access to trans health services, but some of that bias is unconscious, or comes from a lack of exposure or training; some people are so used to seeing the sun from their vantage that they don't consider the moon.

"If we think about biomedical engineering as a practice of problem-solving," Hemminger says, "then health care inequity is probably the greatest problem in our lifetime."

The course follows a unique structure. In the first hour, Hemminger and Nick Greer, her colleague at Thread, teach pedagogy. Jerry Zhang, a recent biomedical engineering graduate who took the course, remembers learning about redlining in Baltimore, the historical discriminatory practice of denying Black residents mortgage loans and other services. "Up until that point," he says, "I didn't really understand why Baltimore was the way it was. These concepts really opened my eyes to the injustices within my own community."

Zhang is applying to medical school and considering becoming a clinician. He has worked on medical device projects at Hopkins, some of which he's still involved in. One project is a perfect example of the issues of biomedical engineering—a pulse oximeter, worn on the fingertip to measure oxygen in blood. "Our clinical mentors found that for dark-skinned patients, the device is biased and inaccurate," he said. "My team is working on making [them] more accurate."

The second hour of the class is given over to a guest speaker involved in community work. Hemminger has brought in Ben Jealous, the former president and CEO of the NAACP; Wes Moore, the current Democratic candidate for Maryland governor; and Fagan Harris, president and CEO of Baltimore Corps. Hemminger said these speakers weren't there just to talk about their successes. "They come ready to talk about the things they failed at," she said, "ready to talk about the time someone said something that was really hard to hear, and it changed their behavior."

Isaac Frumkin, a recent graduate who majored in economics and minored in computer science, says he loved hearing from people making positive contributions to the world. "Getting to ask them questions in a small group setting was a totally invaluable experience," he says.

Frumkin went on to join Wes Moore's campaign for governor while still in school; he's now working there full time as a data associate. He used what he learned in Hemminger's class to make a real impact on the primary. "I worked hard to organize events and canvasses where we would be reaching out to communities historically ignored by the political process," says Frumkin, as many campaigns don't canvass areas where people haven't voted much previously.

The week before the election, Frumkin organized a canvass in Cherry Hill that Wes Moore attended. "We actually saw, based on the data, that the turnout in Cherry Hill [for Moore] was more than a model would've projected it to be, because we actually went and reached out to them."

Finally, the third hour of Hemminger's class is devoted to discussion, much of it introspective. "All the work we did on examining our personal biases definitely changed my perspective," says Frumkin. "I know I'm biased about certain things, but now I understand how extraordinarily impactful that can be in pretty much all of your relationships and conversations."

Subha Batta took the course in spring 2021 and loved it so much that she TA'd the class the following semester. A chemical and biomolecular engineering major, she was familiar with racial inequality and systemic oppression but was eager to learn more about Baltimore specifically. "It was really helpful to learn more context about Baltimore's social climate," she says. After graduating this past spring, Batta accepted a year-long internship at Thread. This September, she started a new position as a research and development grad associate at AstraZeneca.

Batta will never forget the "core competencies" she learned in class. The core competencies were developed as behavioral norms also instilled by Thread to create conditions for belonging in a multicultural, diverse community. One competency, for example, is to fail forward, or to be able to give and receive feedback and grow from it. "I always want to improve on whichever [competencies] I'm lacking," Batta says. "So many of them I hadn't even realized were helpful for social change."

Haase, the director of the BME undergraduate program, also said that engineers must be willing to fail.

"That's what the design process is," she says. "There's all this picking it apart, and your great idea getting transformed, and you might have to rework it. It's a humbling process."

Hemminger sees the class as a place for students to be vulnerable. "The goal, at the highest level, is for the students to come out understanding themselves better and how to connect with others," she says. "It's not easy to do. This stuff is hard. It's uncomfortable. It's messy, and you need a lot of practice."