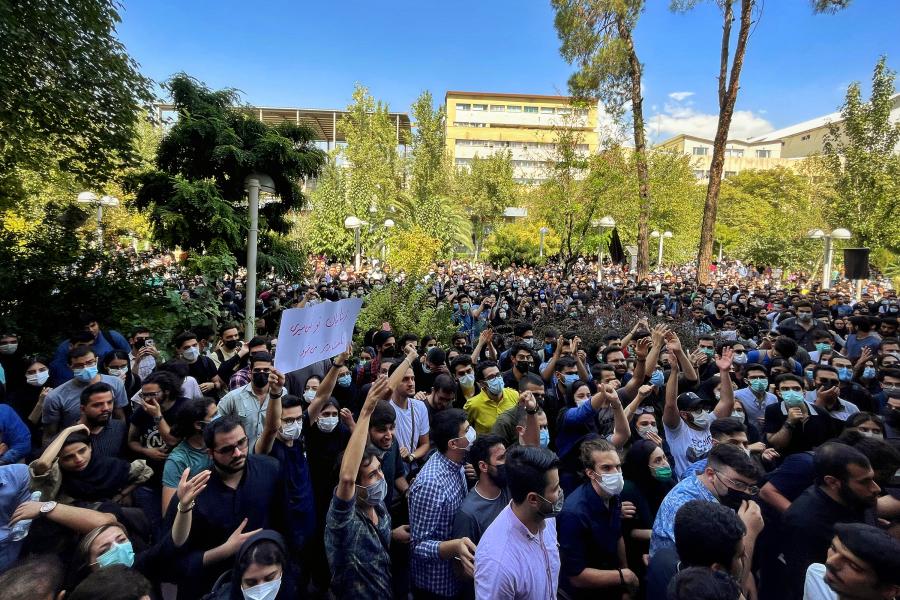 Image caption: A student protest at Amirkabir University of Technology in Tehran on Sept. 20

A woman's suspicious death after being detained for an incorrectly worn hijab sends Iranians into the streets. Will Iran's hardline regime be able to keep a lid on protests sparked by women's headwear? SAIS expert Narges Bajoghli discusses the tumult.

On Sept. 16, a 22-year-old Kurdish woman from northwestern Iran named Mahsa Amini (or, Jina Amini, to use her Kurdish name) was visiting Tehran when she was arrested by the so-called morality police. Her alleged crime: improperly wearing her hijab, the mandated head-covering for women.

Amini died in police custody at a detention center three days later—her family, citing eyewitnesses accounts, says officers beat her after her arrest, leading to her death. Police reject the allegations, saying Amini died of a heart attack after being taken to a hospital.

The event has roiled the nation, sparking some of the most widespread and violent protests since the founding of the Islamic Republic in 1979. Women and girls have often been in the forefront of demonstrations, burning their hijabs amid calls for freedom. Humanitarian organizations estimate the unrest has resulted in the deaths of 200 people, including perhaps as many as two-dozen children. The government, meanwhile, says 20 members of its security forces have been killed.

For a look at what it all means and where it might be heading, the Hub sat down with Iran expert Narges Bajoghli, assistant professor of Middle East Studies at the Johns Hopkins School of Advanced International Studies and author of the 2019 book, Iran Reframed: Anxieties of Power in the Islamic Republic.

What is Iran's morality police?

Policing around Islamic dress codes has existed since the early 1980s in Iran, but it's taken different forms. The "morality police" was formalized as a police force in the mid-1990s. At different points, the state either chooses to deploy this force more widely or limit its presence in public. The new president Ebrahim Raisi, who came into office in August of last year, is from the very religious and conservative end of the political spectrum in Iran. He has focused on increased campaigns against "improper hijab" since coming to office, and especially since July 2022.

The slogan 'women, life, freedom,' which has become the national slogan of this movement, has its roots in Kurdish feminist struggles.

Mahsa Amini was Kurdish. Has that affected how the Iranian people have responded to her death?

In Iran, as in other places around the world, the state uses different identity markers as potential ways of dividing society and preventing solidarity. The Kurds are one of those. They are a lightning rod in Iranian politics, as they are in Turkey, Iraq, and Syria as well. And so to have protests over the death of a previously unknown young Kurdish woman spilling out onto the streets for weeks is really significant because it goes against the nationalist narrative of the state. All over the country, people are standing up for the death of a member of an ethnic minority. And when the state attacked and murdered over 60 civilians in Zahedan during this uprising—in the ethnically Baluch region of the country—chants around the country have concentrated on undoing the politics of division between different ethnic groups in Iran.

And then the other thing to consider is that the slogan "women, life, freedom," which has become the national slogan of this movement, has its roots in Kurdish feminist struggles. And that's really significant because those are also struggles for Kurdish autonomy. Generally, states in the region are very much against such autonomy and have deployed a lot of violence against Kurdish populations. So to have the main slogan of an uprising that's chanted all over the country be a Kurdish slogan for freedom is extremely significant in the history of Iran, and in the history of the Middle East.

How are these protests different from past unrest in Iran?

The previous really big national protests in Iran were in 2009 and were around electoral politics—those protests lasted for over 10 months. The 2009 Green Movement uprisings in Iran are quite different from today because that was still about protesting within the system. It was about having issues with the political structure but in a way that was reformist in orientation. Today's protests are about moving past the Islamic Republic and calling for a new vision of politics. That doesn't mean that this movement is going to succeed tomorrow or next week, right? But what's significant about it is that the slogans are no longer about changing the direction of the Islamic Republic, it's about a whole-scale reimagination of a political future.

Iranian leadership blames the U.S. for "engineering" the unrest. Is there anything the Biden administration can or should do to help the protestors?

I think anything that the Biden administration tries to do to support the movement just puts the people on the ground in more danger. This is, I think, a moment where it's about international solidarity for what the women in Iran are going through but not any type of perceived involvement from Western governments.

Is there a role for big tech companies in getting information in and out of Iran?

I actually think that's where a focus should be. Microsoft recently allowed a day or two of free Skype calls. It was a marketing ploy, but it allowed so many people to reach their loved ones in Iran who hadn't been able to before. It shows that these tech companies are able to provide access for folks to have lines of communication open in a place like Iran where the government is trying to shut communication down.

There have been a lot of sympathetic protests around the world, often with women cutting their hair as a show of solidarity. Are Iranians seeing these and are they of any value?

Yes, people in Iran are seeing them and they are important. You know, this is not the first time that the state has shut down the Internet, so people have ways of getting around such shutdowns. And many Iranians have satellite television and are tuned into news from around the world. As the state is clamping down on them it is important for them to know that it's not happening in silence, that people are paying attention, and that there is international support. People in Iran have been expressing how important it is to them.

"What makes this moment different than other protest movements is that now you have a very visible and everyday form of civil disobedience."

What are you looking for as signs that this protest movement can sustain itself and grow?

The situation is very dynamic, and the Islamic Republic is very repressive and adept at breaking formations of solidarity before they take place, or as they're taking place. But what will be significant is if other groups that have been protesting—whether it's oil workers, teachers, or folks who have been protesting around environmental issues—begin to link up and work in concert and solidarity with one another. We've seen inklings of it, but no broad manifestation of it yet. But even as the state clamps down and deals harshly with the protesters, more women are willing to come out without their hijab on. What makes this moment different than other protest movements is that now you have a very visible and everyday form of civil disobedience. And so that means that even though the authorities will continue to securitize the domestic situation, the unveiling by women and girls is going to be very difficult for them to clamp down on. Having an everyday form of civil disobedience in a country increasingly repressive towards protests is extremely significant. 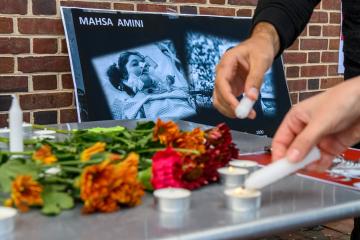 Published Sept 29, 2022
Vigil honors memory of 22-year-old Mahsa Amini, whose death in the police custody in Iran has sparked protests