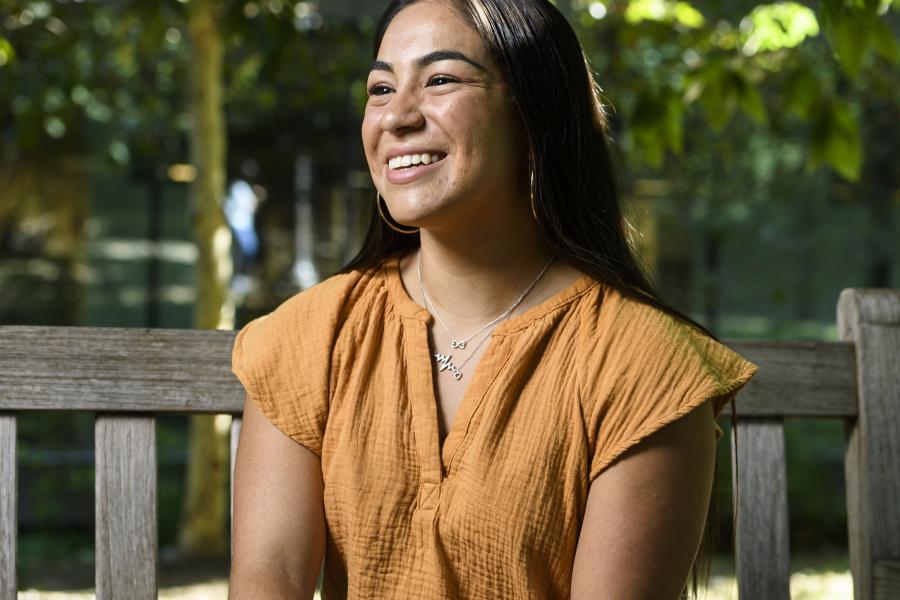 Standing on a step stool just beyond a protective surgical curtain in the operating room at Children's Health of Orange County this past summer, student intern Rosa Rodríguez looked down at the life-saving procedure unfolding in front of her. The patient, just six days old, lay in the center of a cluster of nurses and technicians whose precise movements were orchestrated by the maestro in charge: Surgeon-in-Chief Richard Gates, director of cardiothoracic surgery at CHOC. Over the course of six hours, these experts would repair a hole in the patient's tiny heart, ensuring a healthy future for the infant.

From atop her perch a few feet away, Rodríguez felt galvanized. Inspired. "Fastest and most amazing six hours of my life," she says later with a laugh. The experience, she says, confirmed for her that she was meant to pursue a career in pediatric surgery. And that she was on the right path to ensure that future for herself, as a senior at Johns Hopkins University who took the MCATs, those vastly challenging medical entrance exams, before returning to the university's Homewood campus for her final semester.

But witnessing the surgery was also, in some ways, the culmination of a journey. The last time she was in an operating room—could it have been that very room?—was 21 years ago, and she had been the baby on the table.

The last time she was in an operating room was 21 years ago, and she had been the baby on the table.

"I don't even have the words to describe the feeling," says Rodríguez, who, at just four months old, had open-heart surgery to correct a ventricular septal defect in her cardiac tissue that caused blood to mix in the lower two chambers of her heart. Her operation had also been performed by the surgeon she was now shadowing—Richard Gates. "It was inspiring and exhilarating and kind of trippy, to be honest."

It was a summer that Rodríguez describes as "magic." In her third year with the internship program organized by CHOC's Medical Intelligence and Innovation Institute, Rodríguez spent the summer shadowing physicians at CHOC and mentoring and advising other student interns as they developed abstracts for new medical technologies.

And yet the internship presented challenges that pushed Rodríguez out of her comfort zone, she says. The med tech aspect of the internship almost prevented Rodríguez from taking part in it—she was not as passionate about technology as she was about medicine, she says, and she was on the fence about whether the internship would be a good fit. But the opportunity revealed to her new ways of improving patient care and a new passion for doing so through technology. Two summers ago, after talking with her mother about the anxiety a parent goes through when their child is in surgery, Rodríguez devised a virtual assistant for operating rooms that listens for a surgeon's verbal cues and provides real-time updates to families in the waiting room. Last year, she proposed an AI-powered pharmacist that can cross-reference prescriptions and prevent doctors from over-prescribing medicines. This past summer, she helped student interns develop and perfect their own devices.

She was also hesitant about spending part of her internship shadowing Jessica McMichael, an orthopedic surgeon—a specialization that caused some trepidation for Rodríguez.

"I'm not going to lie—the fact that they use tools that look like something I could have gotten out of my shed in the backyard kind of freaks me out," she says.

And yet it turned out to be among the most rewarding aspects of the experience.

"It was inspiring because she's a woman, especially in surgery, and finding a female mentor was really special for me," Rodríguez says. "Seeing how she runs her OR really taught me the kind of person and surgeon and leader that I want to be. So even though I don't necessarily want to go into her specialty, I want to be her. Spending time with Dr. McMichael in her OR was definitely one of the most profound experiences I have ever had."

As she prepares to graduate early this December with a degree in molecular and cellular biology, Rodríguez is driven by that sense of purpose and of drive. She plans to take a gap year before medical school and to find a job either as an emergency medical technician or a certified nursing assistant to get more real-world experience.

She's eager, she says, to experience more of that magic of medicine.