Josh Bilenker, Med '99 (MD), Keith Flaherty, Med '97 (MD), Steve Harr, Med '98 (MD), and Ross Levine, Med '99 (MD), simultaneously attended Johns Hopkins School of Medicine, but they only grew close after graduation. It was the "common aspirations around pushing the envelope in making novel and disruptive therapeutics for patients" that brought them together, according to Harr. 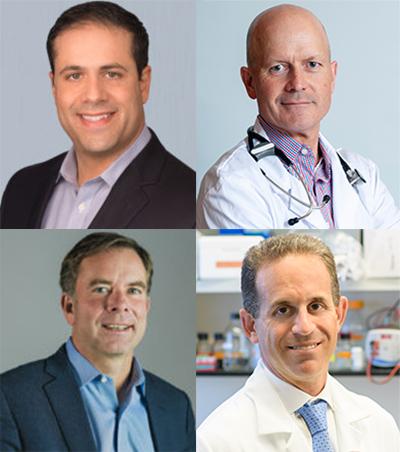 In hindsight, Flaherty says their eventual meeting was inevitable because the School of Medicine attracts a unique type of student: people who aim to master the clinical practice of medicine while seeking a path to making the field more impactful for patients.

"This phenotype manifests in the many ways in which Hopkins med school graduates go about their careers," Flaherty explains.

Through the past two decades, the friends have served as role models and sounding boards to each other. As each approaches important career and life decisions their valued perspective and input provides them the guidance needed to navigate their careers.

Bilenker's and Flaherty's paths crossed at University of Pennsylvania in 2001, where they were pursuing the same medical oncology fellowship program focused on early therapeutic development in cancer, and they really got to know each other. They worked closely under the same mentor, often discussing clinical research strategy and career development. They never lost track of each other as Bilenker moved to the FDA and later to Aisling Capital in New York. It was when Bilenker reached out and visited Flaherty in Boston in 2012 that they began to conceive Loxo Oncology—the biopharmaceutical company Bilenker founded in May 2013 to focus on targeted cancer therapies for genetically defined populations. That fall, Flaherty, currently a professor of medicine at Harvard, joined Loxo as chair of its scientific advisory board. Joining the scientific advisory board at the same time was Levine, who currently holds the Laurence Joseph Dineen Chair in Leukemia Research at Memorial Sloan Kettering Cancer Center.

Harr and Flaherty began to interact early in their career, through Flaherty's role as a clinical investigator of novel cancer therapies and Harr's as a rising-star biotech research analyst and, ultimately, head of biotechnology investment banking. It was no surprise that Harr spotted the field-changing opportunity that Juno Therapeutics, a company pioneered for cancer treatment, represented and joined as chief financial officer and head of corporate strategy. Harr then also joined the trio at Loxo, serving on its board of directors until it was acquired by Eli Lilly in 2019. Levine was recruited to join the Loxo Scientific Advisory Board. Flaherty was familiar with Levine's scientific contributions to the leukemia field, in part because they were both members of the NCI-funded Eastern Cooperative Oncology Group. Levine fit the classic mold of Hopkins physician-scientist, who was at once a cutting-edge laboratory investigator and rock-star clinician; he was and is the quintessential translational researcher, according to his friends.

This group seeks to push the boundaries of innovation and collaboration across academic and private sectors in oncology. The culture that they created at Loxo and that Bilenker promulgated as CEO and co-founder at Treeline Biosciences; Harr as CEO and founder of Sana Biotechnology, where Bilenker serves on the board of directors; and Levine as a co-founder at Auron Therapeutics and deputy physician-in-chief for Translational Research at Memorial Sloan Kettering focused on the intersection of disciplines from discovery science to clinical translation. Collectively, they recruited colleagues from various fields facilitating team-science in the biotechnology sector. Their hope is that companies in oncology therapeutic development borrow this model, which reduces biology to key principles: develop drugs, enroll the right patients who would most likely benefit in clinical trials, and leverage the combined power of scientifically driven investigation with company creation.

Flaherty, Bilenker, Harr, and Levine cannot wait to see what each of them does next as they continue on life's journey and their careers with Hopkins as the common thread.