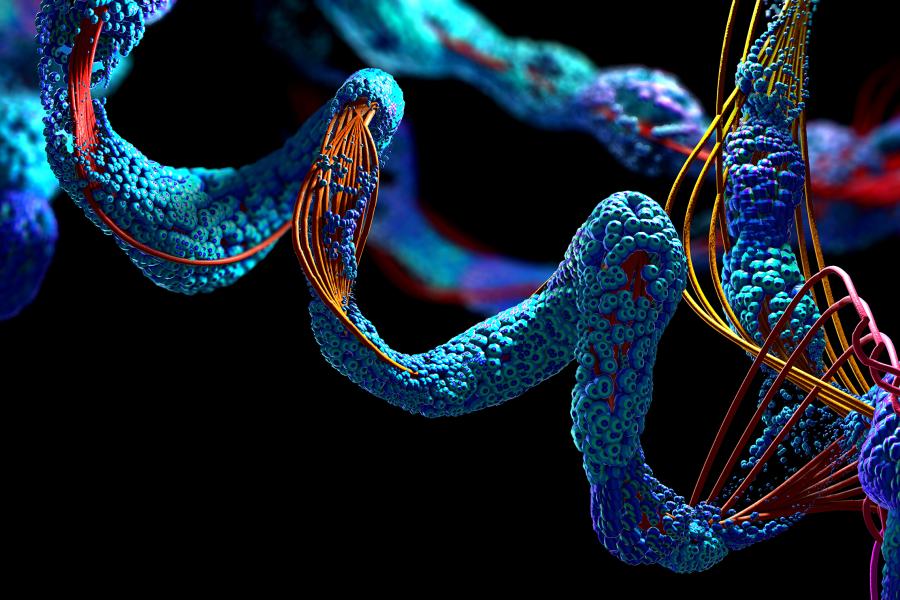 A step toward the creation of materials controlled by artificial genes

A team led by Hopkins engineer Rebecca Schulman has developed a library of genelets that can perform certain cellular functions, laying the groundwork for materials that behave like organisms

By Samuel Schaffter and Gina Wadas

Our bodies' genes work together to regulate how our cells behave. For example, if you skin your knee, your genes use a chemical messaging system to direct an army of cells to heal the abrasion. If scientists could create artificial genes that could carry out the same functions but operate inside materials rather than organisms, a wide variety of new diagnostic, self-healing materials would be possible.

A team led by Johns Hopkins engineer Rebecca Schulman is laying the foundation for that work by engineering synthetic chemical systems that can emulate the complex behaviors of natural gene networks. Their work recently appeared in Nature Chemistry.

"Cells use genes to decide how to move, grow, and act. The ability to make simple 'genes' that could make decisions on their own could lead to better diagnostics or therapeutics, or even provide ways to build new types of soft material robots that are controlled by chemistry instead of electronics," said Schulman, who is an associate professor of chemical and biomolecular engineering and associate researcher at the Whiting School of Engineering's Institute for NanoBioTechnology.

"The ability to make simple 'genes' that could make decisions on their own could lead to better diagnostics or therapeutics, or even provide ways to build new types of soft material robots that are controlled by chemistry instead of electronics."
Rebecca Schulman

The human body comprises about 25,000 genes, and the chemical interactions that these genes use to regulate cells have many steps and moving parts. Researchers have learned that they don't need to meticulously recreate every one of these natural biological steps to create synthetic gene analogs capable of carrying out the same functions. To improve and better predict the behavior of gene analogs, Schulman and her team created a molecular tool kit which includes genelets (very small genes whose functions can vary, depending on instructions), and simplified mathematical models that predict how the genelets will behave.

The team's simplified genelet system uses DNA, the sum of an organism's genetic information; RNA, which conveys genetic information to the parts of a cell that produce proteins; a polymerase enzyme that transcribes DNA to make RNA copies; and an RNase enzyme that degrades RNA. Using just these simple elements, the Schulman team's system can adapt and reset as the environment changes, just like natural genes in the body do.

"One of the challenges is that the components that comprise DNA and RNA don't always behave as predicted," she explains. "Also some components, like polymerase enzymes, are simple and easy to work with, but difficult to control. This makes it difficult to engineer systems that result in the outcomes we want."

To avoid unwanted reactions, Schulman's team created a simple mathematical model that assumes all components behave the same way. Then, to build a chemical system that followed the prediction of the simple model, they systematically identified unwanted reactions and suppressed them by modifying regions of single stranded DNA.

"Typically, unwanted reactions stem from the polymerase enzyme as it is quite reactive to DNA components," said Samuel Schaffter, lead author of the work and a Johns Hopkins alum. He is a postdoctoral fellow at the National Institute of Standards and Technology.

The team screened potential components for the activity they wanted and omitted ones that deviated significantly from the expected performance. This, combined with the chemical modifications to prevent unwanted reactions, yielded a library of about 15 genelets with universal standard performance.

They used these standard components to engineer networks that execute key tasks observed in cells, such as tasks that guide cells during development, as well as networks capable of memory. Their results aligned remarkably well with their simple model predictions, indicating the power of engineering using components with standardized performance.

The researchers are now working to use these chemical systems to control the behavior of nanostructures, nanoparticles, and hydrogels, which could be used in advanced diagnostics, and perhaps one day, self-healing electronics. They hope this toolkit will inspire new applications in other research groups and developed a software package available on GitHub. Users can quickly simulate any network and produce the DNA sequences to test in the lab.

"We want to make this system as easy as possible for other researchers to use," said Schaffter, "We are converging on a system that isn't limited by experimental challenges anymore and our goal is to have the only limitation be the researcher's imagination."