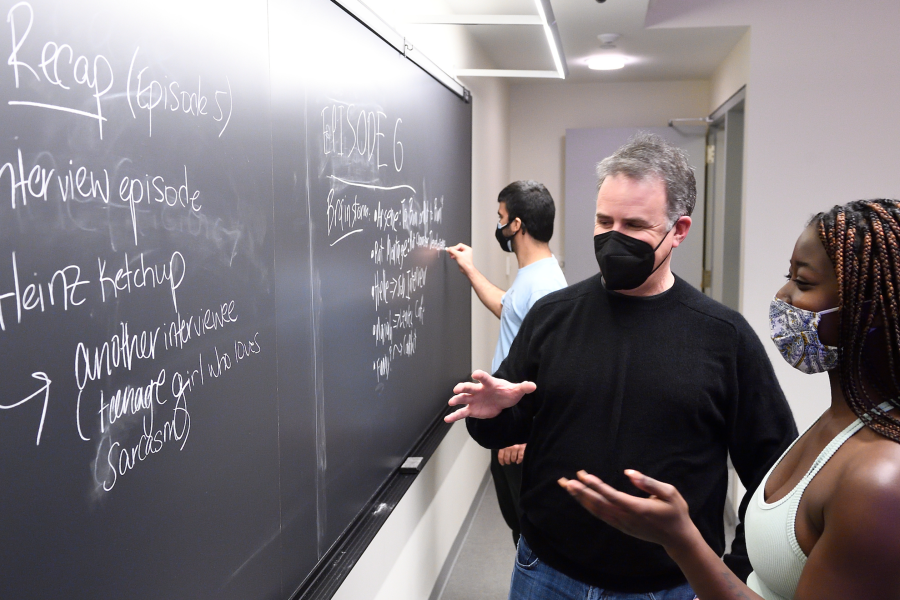 Inside the Writers Room at Johns Hopkins

We open on a chilly Monday evening in February. Down in the building's subterranean labyrinth, the droning sound of a soda machine motor drifts along shadowy, deserted halls lined with locked doors and dark offices.

What's going on? What is this place?

Welcome to the Writers Room

This 5-year-old Film and Media Studies club prepares budding screenwriters for the collaborative work it takes to create your next binge-watch. Imaginations run wild—as evidenced by the goats, demons, and the banana man above.

When envisioning what the "writerly life" looks like, you might picture a novelist alone with just their muses. And, a blank screen or page. But the "screenwriterly" life, especially in the world of episodic television, is no isolated, cloistered affair—far from it. A show's characters, plots, story arcs, and gags are usually collectively developed in an atmosphere of creative give and take. As writers banter, bicker, and brainstorm within what's called, straightforwardly enough, a Writers Room.

"What students are coming away with experientially is really valuable because we're modeling the dynamics of an actual writers room in Hollywood," says Adam Rodgers, who came to Hopkins after a decades-spanning screenwriting career in Los Angeles, where he successfully pitched and sold scripts to the likes of Universal, Fox, and Sony.

The Hopkins Writers Room never has more than eight participants. They're referred to as "staff" to complete the real-world simulation. Each is chosen by faculty on the strength of a script they submit along with their application. Each semester, Writers Room staff set about creating an eight-episode web series. Rodgers says that, while web series are usually lower-budgeted affairs by design, they don't want to limit students' creativity to shows that realistically could be filmed by students on or around campus. Money is no object.

First, each of this year's seven staffers pitches their own series idea—from comedy to horror, goats to ghosts—and receives constructive feedback from the room.

After the initial pitches, each staffer writes a 10-page script for a pilot episode (about 10 minutes of screen time). Each script is given a table read in the room, with staffers reading the various parts. As the group doesn't have the bandwidth to proceed with all seven, a vote is taken on which proposed show seems strongest. Creating a proof-of-concept informs the voting and mirrors the way television is actually produced. Rodgers says that no executive would green-light a season without first gauging the effectiveness and success of a pilot episode. This marks a transition that TV screenwriters often need to make. Have some chutzpah to sell your own ideas: which they've already done with one another. And be prepared to pivot into team-player mode, working on someone else's creative baby.

"This type of writing is highly collaborative—it's fundamentally collaborative," Rodgers says. "And that means human dynamics come into play, including conflicting egos. But with the right balance, these are incredibly productive ingredients for good material. Students are learning all of these things while stretching themselves creatively."

Where the Writers Room Started

The Writers Room program was created by senior lecturer Meredith Ward in 2017, with support from the Saul Zaentz Innovation Fund. This helped to bring in some professional writers to speak with the students, such as Saturday Night Live writer Zack Bornstein and Sarah Gubbins, co-creator of the Amazon series I Love Dick. Also visiting that first year was a Homewood-to-Hollywood alum, Luke Kelly-Clyne '10. He's worked in writing rooms large and small as writer and producer for College Humor, Comedy Central, Netflix, and NBC. (Just recently he was tapped to co-lead HartBeat Independent, a division of actor/comedian Kevin Hart's HartBeat Productions.)

"What students are coming away with experientially is really valuable because we're modeling the dynamics of an actual writers room in Hollywood."
Adam Rodgers
Director, Film and Media Studies

Kelly-Clyne has returned to speak to film and media students and has donated funds students can use to film scripts. "I'm happy to do it," he says. "In the entertainment world, more than maybe anywhere else, there needs to be a practical path forward. It's crucial to understand what makes someone thrive and work well in this business."

It's never been easy to get a foot in the show-business door, on either side of the camera, but Zachary Byrd '19 knows to treasure any toehold you can get. Originally a mechanical engineering major, Byrd switched to film and media studies late. He had to play catch-up with film classes and writing. That's perhaps why he didn't get accepted to join the Hopkins Writers Room when he applied. However, he's now based in Los Angeles, where he completed a stint as a writers' production assistant for the latest season of Apple TV's hit comedy Ted Lasso.

"My main job was, literally, to get coffee and lunch for the writers on the show and it's just as non-glamorous as it sounds," Byrd says. "But the access I got to the writing room was insane." His food and beverage duties took but a small part of his day. The bulk of his time he got to hang out and watch Ted Lasso episodes be born.

"You get to see all these different people come together to make one story—creating and molding it while pulling from themselves," Byrd says. "It's beautiful." And more than once he also heard these beautiful words as the room's eyes turned to him: "Zach, what do you have to say?"

"I actively participated in multiple storylines, which was one of the scariest and most validating feelings in my life," Byrd says. "I was so nervous the first time I contributed. But then somebody said, 'Hey, that's actually a good idea.' And they bounced off from it. And then someone else added on to it. It was magic."

Some say there's more creative magic about now than ever before. That we're in a Second Golden Age of Television as deep-pocketed streaming giants—many of which didn't exist a generation ago—produce a flood of programming for screens big and small. Indeed, industry analysts estimate that Amazon, Netflix, HBO, Hulu, Disney+, and all the rest will spend nearly a quarter of a trillion dollars on content creation this year alone.

The seven students toiling away in the depths of Gilman Hall hope to someday get a taste of that Hollywood lucre. And as alluded to earlier, they allowed a reporter to provide fly-on-the-wall perspective as they pitched ideas and sought a little writers room magic of their own. 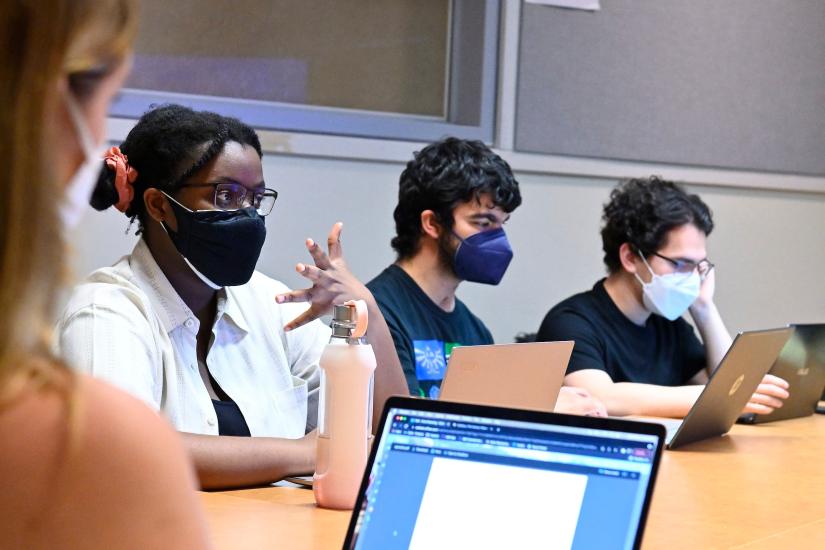 In one spirited exchange, Abena Ababio lays out her ideas for Entrepreneurs. It's about two broke girls—old friends united after graduating college to found and run a café. There's Mariah, "sophisticated, creative, and funny," who just graduated from Pratt Institute with a degree in interior design. And Halle, "assertive and persistent" with a degree in marketing from Northwestern.

"So, with no business experience whatsoever, lots of college debt, and a great amount of competitiveness, these two friends strive to turn their new business into the most successful café in town while underestimating how much strain being business partners can put on a friendship," Ababio says.

Another wrinkle is Mariah's eccentric, larger-than-life uncle Desmond (a "funcle," as Ababio dubs him). He gave the café storefront to his niece as a graduation gift—after winning it while gambling.

Before the next stage can begin

Now, Ababio will make some adjustments to the script. Based on the feedback she received from her fellow writers during her initial pitch:

After multiple rounds of voting, Entrepreneurs emerges as the room's choice to move forward with for the rest of the semester. The plan is for students to film one or more of the episodes over the summer once all of the episodes are written.

Writing Episodes for the Winning Pitch

Abena Ababio has assumed the role of "showrunner." She moves to a large chalkboard. In other Hopkins classes it might become covered with math or chemical equations. But here, she makes headings for episodes 1 through 8, writing "A Plot" and "B Plot" beneath them to indicate parts of the story to be developed. When this meeting is done, each staff member will be assigned an episode to write. But now to flesh out the arc of the show's action and conflicts:

Adam Rogers: So Abena, what are your initial thoughts?

Abena Ababio: The only thing that I definitely want to happen in every episode is that the uncle has to do something weird. I'd also like a cooking episode where they're, like, figuring out their menu. 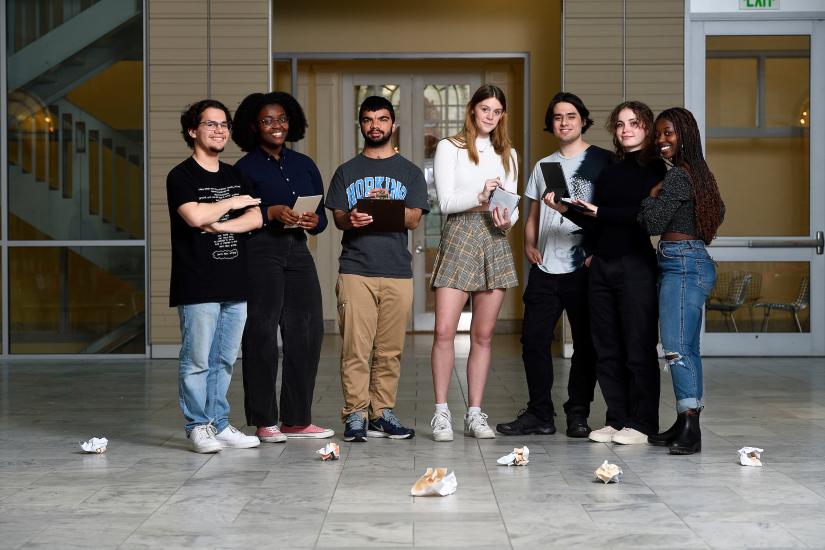 Writers Room Pitch: Banana Man A crime thriller based on a historical event about Sam Zemurray (1877–1961) who came from Russia to America and started selling bananas from a pushcart. He became wealthy by selling bananas, purchased property in Central America. Then he started a successful fruit company, and essentially overthrew the Honduran government.

So, do you really want to direct? Not really, seems stressful!

Writers Room Pitch: Ubiquity USA
Chichi is hired to work at Ubiquity, the company in charge of regulating all life in America. They haven't hired anyone in five years. She has to move to a company town to figure out the norms of the place and also why they're having lots of glitches, such as clocks running backwards.

When not writing: I'm playing saxophone with the band.

Writers Room Pitch: A Whistling of the Mine Shaft Girl
A supernatural horror show about a group of backpackers hiking through a forest. They meet an old woman who shows them an abandoned mine and tells them about a girl who was lost there: a ghost girl who whistles. They soon realize one of them is missing—just as a chunk of the mountain tumbles down and closes the mine.

Dream writing job: I would love to write for a show like New Girl.

So, do you really want to direct? No, I'd rather be more behind the scenes.

Writers Room Pitch: Rush
A fictional exposé on sorority rush, showcasing the good and bad experiences young women have. Set at a fictional Ivy League school, two roommates prepare for rush. One from a family where the women have always belonged to a certain sorority, and the other a first-generation college student.

Dream writing job: If there are any left, I'd love to do a superhero film or TV show.

Writers Room Pitch: Operation Tartarus
It's December 1944 and Allied leadership find that Nazis are using an old castle in an Alpine village as a fortress. They assemble a squad of highly skilled operatives to evaluate the castle defenses and neutralize the forces occupying it. In a desperate bid to unleash power, occult-obsessed Nazis conduct experiments that open a portal to hell.

Writers Room Pitch: Goatman
In this comedy inspired by a true story, a quixotic 20-something living with his parents gains fame after opting to live among a herd of goats. His sister, a corporate lawyer, resents him for achieving success this way. Residents of the small-town setting react to the goatman in their midst.

Guilty screen pleasure: Corny Lifetime/Hallmark Christmas movies; my Dad and I watch them every year.

Two old friends unite to start a café. One is sophisticated, creative, and funny, and the other is assertive and persistent. With no business experience, lots of college debt, and competing egos, the friends strive to make their business a success while underestimating how being business partners can strain a friendship.