'The Raven' magazine, launched by Hopkins philosopher David Velleman, seeks to return philosophical essays to the realm of the creative

David Velleman started a magazine to put the heart back into philosophy.

Philosophical writing used to consist of wide-ranging, creative essays that were grounded in technique, but still accessible to a general audience, says Velleman, Miller Research Professor in the William H. Miller III Department of Philosophy at the Krieger School of Arts and Sciences. They made readers think, and they helped some of them decide to become philosophers.

But most of the papers published today cover ever-narrowing topics in an increasingly formulaic style, Velleman says, or are papers about other papers. Which takes all the fun out of reading them.

"I had come to philosophy as a graduate student at a time when very distinguished philosophers were publishing articles on profound topics written in a way that could be read by any well-educated reader," says the Johns Hopkins philosopher. "These became classic papers on profoundly humanistic topics. But in the last 10 to 15 years of my career, I found that the discipline was veering, as I saw it, off course. The literature was about the literature rather than about human life."

"In the last 10 to 15 years of my career, I found that the discipline was veering, as I saw it, off course. The literature was about the literature rather than about human life."
David Velleman
Research professor

So when a former colleague, who had left philosophy for journalism, suggested several years ago that the two of them start a magazine as a home for the kind of philosophical writings they both missed and wanted to read, Velleman—who was about to retire from New York University—thought it sounded like a good idea.

Renowned for his research and writings in moral psychology, free will, and ethics, among other topics, Velleman is also an experienced publisher. He briefly diverged from his doctoral program in philosophy at Princeton to pursue a short-lived career in publishing, and has spent his career committed to open-access publishing; most of his work is available in open access form, and he co-founded the online journal Philosophers' Imprint. His colleague-turned-co-editor, David Johnson, serves as deputy editor of Stanford Social Innovation Review and formerly worked at Harper's Magazine and Boston Review, among others. Between them, they have a hefty background in both philosophy and publishing.

In a nod to Velleman's new home in Baltimore, they named the magazine The Raven. The first issue was posted online in December 2021, and a second issue just appeared at the end of June. Topics might range from the philosophy of time to ethics, the philosophy of mind to the nature of consciousness.

The magazine has already received a fair amount of attention. Thirty thousand people have visited the site, and it was written up in Die Zeit and received a mention in Arts and Letters Daily. A lot of that attention has to do with an article in the first issue by University of Utah philosopher C. Thi Nguyen titled "Twitter, the Intimacy Machine," which explored the contradictory nature of the social media platform that both invites and exploits intimacy. Referencing the late philosopher Ted Cohen's theory of jokes, Nguyen makes the case that Twitter is prime territory for something called "context collapse," as the format both encourages users to rely on a shared context to engage in meaningful communication, and punishes them when retweets thrust their words into quite different contexts. 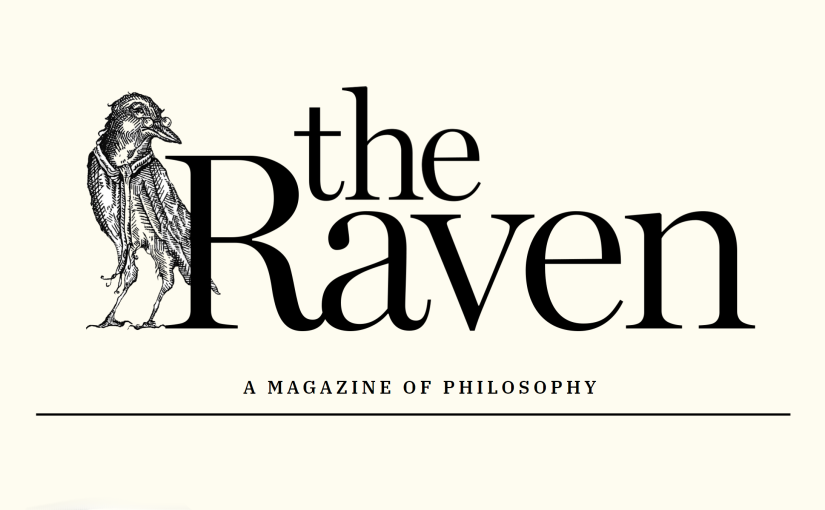 Image caption: The masthead of The Raven magazine.

In contrast to philosophical journals, The Raven uses a pitch process instead of a submission and referee process. Pitches are reviewed by a three-member advisory board. Some of the pitches come from philosophers Velleman and Johnson know; some from outside their circles. Successful pitches must show an ability to treat their subjects philosophically and an ability to write. "It takes a certain literary talent to be able to do this," Velleman says.

There is a trend that tries to bring philosophers into public debate through what is known as public philosophy, where philosophers are asked to provide philosophical angles on various issues of the day. The Raven is not that. Instead, Velleman and Johnson aim to reawaken the substance of old school philosophy, simultaneously flinging its doors open to a wider audience. Instead of inviting philosophers into the public fray, they are inviting the public to engage with the wilds of philosophy, but in ways that feel relevant, interesting, and most of all, human, Velleman says. They hope to contribute something the field has lost, and also send a message.

"We want to make a point and remind our colleagues of what has gone wrong, and we want to produce some of this kind of philosophy and have a good time," Velleman says. "There are a number of philosophers who would like to see the discipline moving in this direction."

In &quot;In Defense of Princess Culture,&quot; Adam Kadlac @ajkadlac analyzes Disney's princess industrial complex and what it offers for his daughter and family. https://t.co/JQyhE4Cq3p pic.twitter.com/37TGuj3l85

As an online magazine, The Raven doesn't have a lot of expenses, but those it does have are covered by the philosophy department's endowment from philanthropist William H. Miller III. In 2018, Miller committed a record $75 million to the department to broaden and intensify faculty research, graduate student support, and undergraduate study of philosophical thought.

Eventually, as The Raven ramps up to more frequent publication, Velleman hopes it might be able to provide fellowships for graduate students to experience the world of publishing and gain skills outside of academia, though no immediate plans are in the works.

Meanwhile, the department's chair, Steven Gross, views the magazine as just the sort of undertaking he wants to see the endowment encourage.

"Building bridges across academia and beyond is among the core goals of the generous gift our department received from Bill Miller," Gross says. "I can't think of a better use of our funds than to support a venture like The Raven. Especially under the leadership of Miller Research Professor David Velleman, one of the most eminent scholars in our field, who writes beautifully himself and has a proven record of innovation in academic publishing."

"Too often, academics write just for one another," Gross adds. "Discussions can become insular and disengaged. The discussion that The Raven fosters is different. It offers fascinating explorations of fundamental questions, with writing that's sophisticated but jargon-free and engaging. But it's a boon to our field not just because it brings important philosophical ideas to a broader readership. Discussion is a two-way street: the philosophical work is enriched by these interactions as well."