Ballet After Dark, a nonprofit that uses a trauma-informed dance therapy curriculum and holistic resources to encourage healing through movement for survivors of sexual violence and various levels of trauma, was awarded the $25,000 Cohort Prize by fellow members of the Social Innovation Lab's 2021–22 cohort.

Based at Johns Hopkins Technology Ventures, or JHTV, the Social Innovation Lab supports innovative, mission-driven companies and disruptive technologies to create change and opportunity in Baltimore and beyond.

The Cohort Prize was announced at the end of SIL's Innovators' Showcase on April 26, during which the 10 cohort teams presented their ventures to community members, potential funders, ecosystem representatives and fellow entrepreneurs. More than $40,000 was awarded during the event thanks to support from Johns Hopkins alumni, including Mary Miller, a JHTV advisory board member, and alumni Sarah Noonberg, Mike Brooks and his wife, Jessica Waite, and Charles Homcy, who is also a university Trustee.

New this year was an audience choice award, voted on following the teams' presentations by the more than 240 audience members in attendance and watching online. The $2,500 prize went to TamPal, a products and services company aimed at making access to tampons and pads as easy as accessing toilet paper.

The Innovators' Showcase was the culmination of a six-month program that provided the teams with business support, including funding, advising, technical assistance, and training, through a rigorous customer-discovery curriculum geared toward maximizing community impact and sustainability.

"There was something magical about the connections and energy in this year's cohort," says Madison Marks, SIL's director. "Everyone had years of background in the space that they were trying to have impact, and that really made a difference."

Tyde-Courtney Edwards, Ballet After Dark's founder, has been offering dance therapy in some form for seven years and incorporated the organization in 2018. More than 220 individuals, of which 70% are Black and brown residents of Baltimore, have taken part in a dance therapy cohort in the last four years. The nine-month course features a dozen workshops centered around dance, including ballet and burlesque, as well as units on mental health, financial literacy, and self-defense. 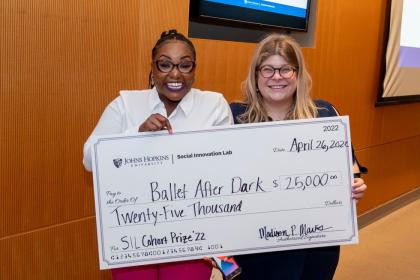 Image caption: Tyde-Courtney Edwards, left, founder of Ballet After Dark, with Madison Marks, director of the Social Innovation Lab, after Ballet After Dark was awarded the $25,000 Cohort Prize during SIL's Innovators' Showcase in April.

A lifelong dancer and lover of ballet, Edwards stopped dancing after being sexually assaulted in 2012. It took her three years to return to rehearsals, but she now credits dance with helping her reset her life.

"There are elements of ballet that helped me reconnect with my femininity and my womanhood," Edwards says. "And those were elements of myself that I felt like I lost as a result of survival. Being reminded of graceful lines, of elegance and posture and alignment really helped me start to repair those parts of me that I lost."

Edwards realized others could benefit from dance therapy, too.

"I was desperate to be a part of a system or a network of survivors with similar experiences that looked like me that I could talk to about things and work through them," she says. "I'm not the same woman I was prior to this incident occurring. I'm someone else and I need resources tailored to who I am now. But what does that look like? So, I started seeing that and I put it together."

"One of the things I loved about working with Tyde-Courtney is that she would take the information provided in our weekly sessions and apply this to her business in real-time," Marks says. "She is not one to sit around waiting for things to happen. Tyde-Courtney is a dot connector and was able to build local and national partnerships during her time in the cohort, bring exposure to what she is doing on the national stage and invite others to join along her in this effort."

Edwards, who says she has received inquiries about Ballet After Dark classes from around the world, is in the process of launching B.A.D. Studios, a for-profit online platform featuring live and recorded classes. She plans to use the cohort prize in part to fund internships at Ballet After Dark, one for fundraising and campaign development, the other for community outreach and partnership development.

"I'm just extremely proud that I stayed connected to what drew me to the idea of Ballet After Dark, and that was creating a community, having a social impact and making sure that our most vulnerable community members had opportunities for exposure and representation," Edwards says.

BOOB'R works to challenge and erase the stigma for individuals who want to breastfeed while incarcerated, advocate for change within the prison system, and establish lactation support for mothers behind bars.

Enigma Science and Technology is developing technology that can be used to reduce the number of arrest-related deaths as part of its overall mission to solve current and future challenges impacting society.

Fem Equity is a membership-based platform that strives to make pay equity a reality for women of color by providing the tools and support and inspiring the confidence they need to make empowered decisions for career success and financial security.

Glass Recovery and Sustainable Systems (GRASS) Baltimore is a zero-waste cooperative that maximizes the value of glass by turning it into artwork and reselling bottles to local breweries. GRASS also will be a space for learning about zero waste and offer space for local and traveling artists to sell or perform their work. GRASS received the third-place cohort prize of $5,000.

Loam is a social design and facilitation practice that empowers purpose-driven people and organizations to create agency and liveliness where they work, learn, and lead.

Yoga in Classrooms and Schools Consulting works with schools and school districts to develop tailor-made, impactful, and long-term yoga and mindfulness programming for students, staff, and families through a model of long-term coaching and support, cross-curricular integration, and the creation of culturally relevant programming aligned to the needs, values, and goals of the school community.