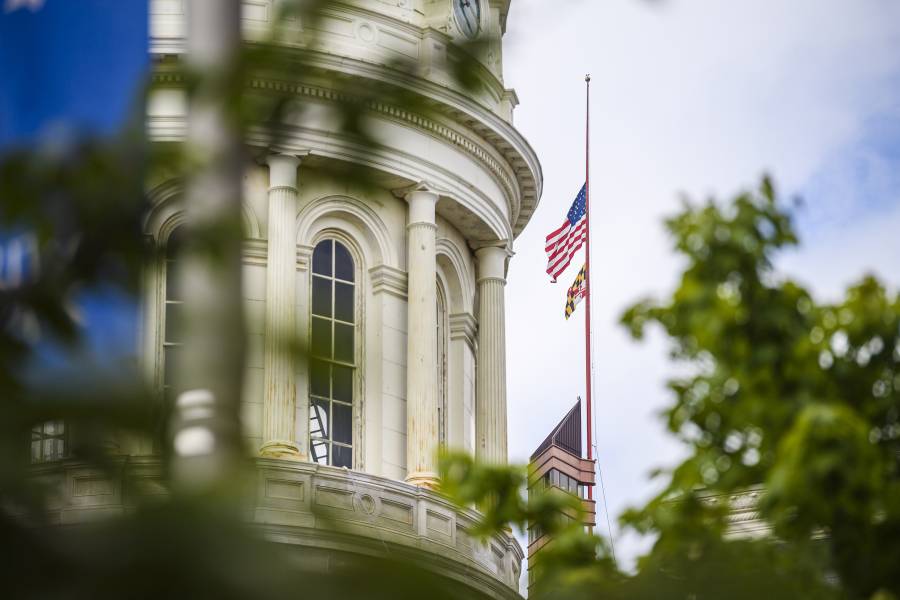 Image caption: Flags across the U.S. were ordered to be flown at half-staff in remembrance of the 1 million Americans who lost their lives to COVID-19

More than 1 million COVID-19 deaths should serve as warning to U.S.

Experts from the Johns Hopkins Coronavirus Resource Center on Friday said the recent milestone of 1 million COVID-19 deaths in the United States should serve as a stark warning that the nation needs to improve disease surveillance, rebuild trust in public health agencies, and invest more in vaccine development.

"We've all been impacted by the pandemic, but none more so than those who have experienced the death of a loved one," said Brian Garibaldi, the CRC clinical lead and medical director of the Johns Hopkins Biocontainment Unit. "I think that's important to take time to reflect on that."

The United States officially crossed the 1 million deaths threshold on Tuesday, according to CRC data. Johns Hopkins and other experts agree that the number of U.S. and global fatalities is likely much higher but have gone undetected by inaccurate tracking methods deployed by governments.

The acknowledgement of such flawed systems and the lack of presence of a national strategy for capturing at-home tests have served to undermine the public's trust in its health institutions.

"We need to work to restore our faith and trust in medical institutions and health care agencies such as the CDC and the WHO," Garibaldi said. "We need to actively combat misinformation as a threat to public health and to the very nature of our society."

Beth Blauer, CRC data lead and associate vice provost of Public Sector Innovation, said a toll of 1 million deaths was "unfathomable" at the start of the pandemic and that the milestone is a "somber reminder" that Americans continue to die every day of COVID-19.

But the lack of reliable data on testing has left the nation "flying blind with a very limited understanding of where the disease is and which communities are being disproportionately impacted," Blauer added.

As Blauer has been warning on the CRC's Pandemic Data Initiative, multiple states have started to reduce their public reporting and tracking just as new surges are being reported across the country.

"At times we were able to be very precise about where we were sending testing resources and vaccine information," Blauer said. "We are going to lose the ability to be precise with how we target interventions and mitigations."

William Moss, CRC vaccinology lead and the executive director for the International Vaccine Access Center, said the nation also needs to do far better at increasing vaccination coverage beyond the 67% of the U.S. population considered to be "fully vaccinated," a category that is changing as recommendations call for additional doses.

"This is such a tragic milestone," Moss said. "But it's made even more tragic by the fact that many of these deaths could have been prevented with vaccination."

"We cannot afford to become numb to the numbers," he added. "We need to continue to be vigilant and one of our best tools is vaccination."

"It cannot become the new normal that we allow a preventable disease to kill hundreds, if not thousands, of people every day," he said. "We've seen with careful attention to data, wearing masks, appropriate social distancing, and with vaccines that we can largely eliminate death from respiratory viral pathogens if we recognize where they are and act according to the data."

"It cannot become the new normal that we allow a preventable disease to kill hundreds, if not thousands, of people every day."
Brian Garibaldi
CRC clinical lead

National and international leaders and the public need to "recognize that climate change is a public health issue."

"As we think about this pandemic, this is the third time in the last 20 years that there's been a novel coronavirus that's been spread person to person and each one is worse than the one before," he said. "This is a general reminder that zoonotic diseases are on the rise as climate change has changed how we interact with animals in our environment, and the interconnectedness of our world means we have to step up surveillance, not just in the United States, but everywhere."

The emergence of monkey pox cases in Europe and North America should serve as an added reminder that the global public health industry also must continue to develop new vaccines to be prepared for the next virus that jumps from animals to humans.

Crystal Watson, the CRC public health lead and a senior scholar at the Johns Hopkins Center for Health Security, said the pandemic is still not over and it will continue to play a significant role in the health of the United States and the world for years to come.

"The public health impact of these deaths is much more widespread than this official number," Watson said. "People who have died from COVID have left behind family and friends, loved ones, and, very unfortunately, left children without parents and grandparents to care for them. And, in some cases, parents who have to go on without their children.

"The toll goes beyond the deaths themselves," she added.