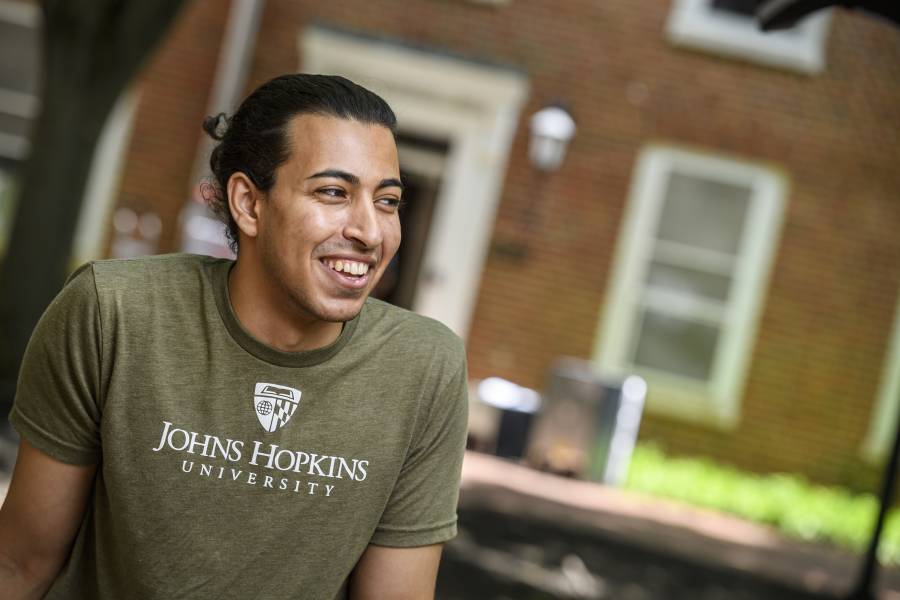 From class clown to Commencement

Krieger School senior Nader Barsoum receives his bachelor's degree on Sunday, an accomplishment that marks a shift in the trajectory of his immigrant family, he says

No one is more surprised than Nader Barsoum that he's graduating this week from Johns Hopkins with an enviable GPA, a summer internship, and a job lined up.

A community college transfer student who was once a class clown with mediocre grades, Barsoum says, "Basically my dad worked in a gas station and so that was just where I was kind of projected to end up if I didn't get my life together."

His father brought his family to southern California from Egypt to escape religious persecution and for better job prospects. He and his brother, who were both in elementary school when the family immigrated, learned English quickly but his parents had a harder time and struggled with health issues.

"My life has been what-ifs and taking chances and so I literally was like 'I have nothing to lose.'"

He graduated high school with honors and planned to attend a state college and row crew just like his older brother. But a few weeks before classes began, his brother and a cousin had a "reality check" talk with him about being a more dedicated student. Barsoum says he then decided to go to community college for a fresh start.

"Nobody knew my mistakes there; nobody knew me from high school so I could be the person who I wanted to be," he says.

There he immediately joined a STEM group and found friends who competed for good grades and bragged about studying. When it came time to transfer, Barsoum's GPA was a 3.8 and he could apply to schools without having to pay application fees, so he set his sights high.

He remembered seeing a Johns Hopkins brochure among coupons that came in the mail. Since he thought he might want to become a family doctor one day, he applied.

"My life has been what-ifs and taking chances and so I literally was like 'I have nothing to lose,'" he says.

When he finally got into Johns Hopkins, the campus was closed because of COVID-19, so he juggled online classes in his family's cramped apartment with a spotty internet connection. Chat rooms were silent among his classmates and his molecular and cellular biology major courses in the Krieger School were intense.

"I never used Blackboard before. So I was trying to figure all this stuff out on my own and it was very lonely," Barsoum says. "So then, I said, 'You know what, I'm at a professional school now; I should start using LinkedIn.' And that was like the biggest mistake of all time, because I was seeing [classmates] who were straight A students, who were doing research, … who've been published. And here I was."

The only reason he didn't quit, he says, is because he feared his parents might not live to see him graduate. Their experience with American health care as uneducated and poor made him want to become a family physician, attuned to considerations like patients' ability to afford over-the-counter medications.

Barsoum "has faced challenges that many of us may never experience in our own lives," says Jessica Kupper, director of Residential Life. "While nothing has come easy for him, you will rarely hear him talk about how hard he works, but if you pay close attention, you'll see it."

He ended his junior year with a summer internship at Harvard Medical School and Massachusetts General Hospital. He also found a job for his senior year on campus as a residential adviser with a perk: a room to himself—a first for Barsoum, who had always shared a small room with his brother.

Kupper says Barsoum has made a big impact in the residence hall. "He's worked tirelessly to not only ensure his own success but has spent countless hours supporting others and building community as well," she says. "He's humble, eager to learn, and truly interested in making the world a better place." 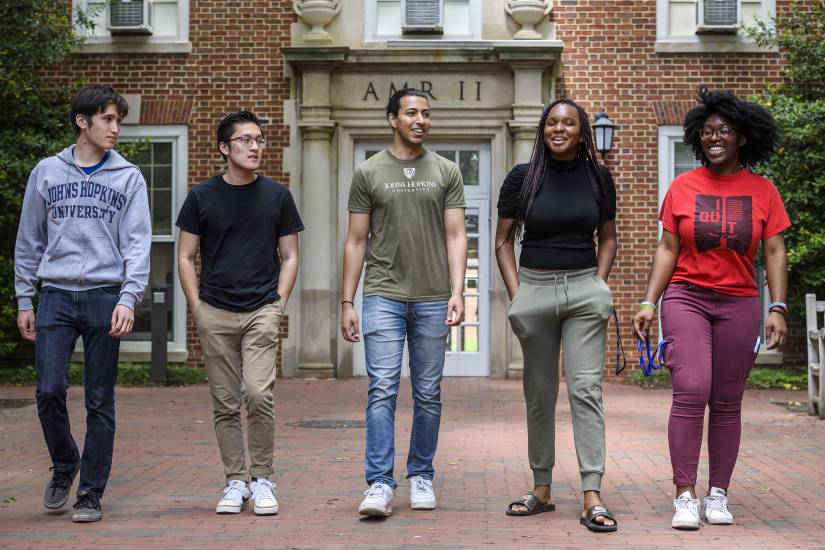 Barsoum's parents are now healthier but cannot afford to travel to Baltimore for the graduation ceremony. They will watch the livestream broadcast on Sunday with other friends and relatives, including his older brother, who was the first in his family to attend college and graduated in 2019.

Barsoum, who is graduating with departmental honors and expects to finish with a 3.8 GPA, says he is proud that his mother can brag about her sons: "When I was younger, there would be times my mom would just kind of just sit there and cry," he says. "That's one of the reasons why I kind of continued on this path, even when it's been hard is so that she will never have to feel that same way again."

After Barsoum receives his diploma, he'll start a summer internship with the Bloomberg School of Public Health and a job at Johns Hopkins Bayview Medical Center taking notes for doctors. Barsoum says it will give him some time to study for medical school entrance exams and finally see a bit more of his adopted hometown and state.

Barsoum's resilience stands out, says Bill Smedick, director of the Leadership Studies Program at the university's Center for Leadership Education, who had Barsoum as a student in two courses. He noticed Barsoum was eager to take pointers that improved his writing and watched him learn to be a skilled team member. "He's a quick, quick learner," says Smedick. "He's working hard to make sure he can make himself a competitive candidate for medical school. He really is a remarkable young man."

Barsoum says he would like to speak to students at his community college alma mater, in hopes that they'll see his path as proof of what is possible.

"To be here—this changes the trajectory of my entire family," Barsoum says. "Things are possible now … and there's gonna be this generational impact, and I am trying to get others to be able to have that same opportunity."