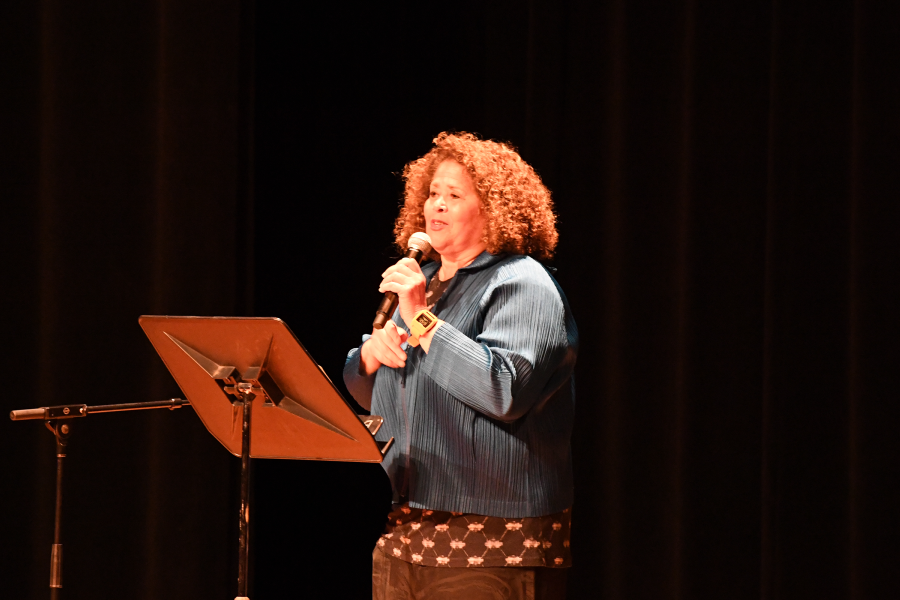 In a lecture hosted by Billie Holiday Center, Baltimore-born dramatist Smith described a light that comes from the city and its people, even amidst ongoing societal struggles

When dramatist Anna Deavere Smith takes the stage, a particular thing happens. People who are not physically there come to life nevertheless, their words and voices and mannerisms, their convictions and experiences, inhabiting space and time with the audience through Smith.

Baltimore born and raised, Smith animates her performances with a specific blend of art and intellect. She grapples with the most vital issues of our times in the ways that matter most to those who live closest to them. She confronts and celebrates. Her performances land hard and long on the audience. They demand that her audience thinks.

This blend is also what leaders of the Johns Hopkins Billie Holiday Center for Liberation Arts have in mind for their work in general and for their signature event, the annual Donald V. Bentley Distinguished Memorial Lecture. Smith headlined the second annual iteration of this lecture, held last month in partnership with the Baltimore Museum of Art.

"It was real. It was authentic. She talks like Black Baltimoreans speak."
Evelyn Chatmon

"Our hope, our small intervention, is to deploy the arts to inspire us to be engaged civically," said Kali-Ahset Amen, the center's managing director and assistant research professor in the Department of Sociology. "We are always considering ways of expressing this proposition that engaging with the arts and the humanities can be liberating for people, and historically, Black people have certainly expressed their aspirations for freedom through the arts. In our archival and historical work, we are seeking to discover those connections and present them to contemporary audiences, and through our public arts and humanities work, we're trying to figure out ways to do likewise."

Standing on a dark and minimalist stage with a music stand and single spotlight, Smith pulled a Baltimore-heavy handful of characters from her canon of hundreds for her enthusiastic hometown audience that night: her aunt, who lived near Smith in West Baltimore; Kevin Moore, who filmed the encounter between Freddie Gray and officers the day Gray died in police custody; Congressman John Lewis describing his forgiveness of a police officer who had assaulted him during the 1965 Selma March; and Smith's childhood classmate Kenny, who later became an award-winning physicist. 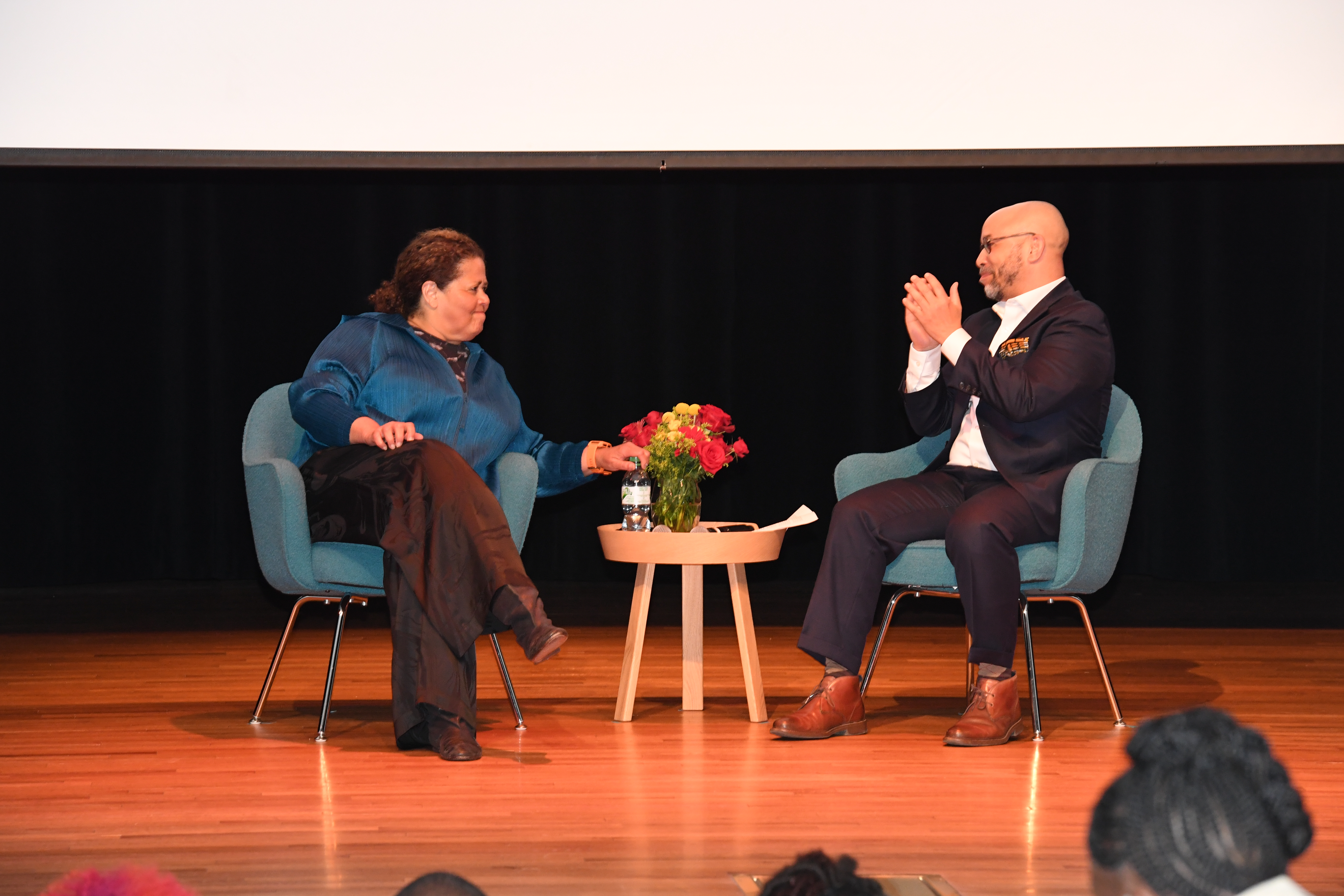 In that piece, Kenny was stymied by an algebraic problem, eventually recognizing the overall principle that made it all click. "And then [Smith] subsequently connected that to how we struggle to figure out what's at the root of our societal problems, and every now and then the light bulb goes on, and we come up with a really paradigm-shifting solution," Amen said. "But she was also suggesting that Baltimore produces these amazing people, lest we forget, amidst this other narrative of Baltimore being bereft of talent and beauty."

In the full house of more than 350 that evening, Evelyn Chatmon was most impressed by how fully Smith became her characters, and how completely this process re-drew Chatmon into the worlds of Lewis and Gray that she already knew so well.

"I was feeling that I was right there at the time," said Chatmon, the co-founder and co-chair of the archives and artifacts ministry of Baltimore's Union Baptist Church. "It was real. It was authentic. She talks like Black Baltimoreans speak. She just has it down pat. She knows the lingo. I could have listened to her for twice as long as she actually spoke."

Nate McCoy moved to Baltimore from Seattle five years ago and describes his background as "not very diverse." The performance exposed him in a new way to people he often only encounters through the media.

"Being face to face with the stories instead of seeing them through a screen, and being interpreted by someone as gifted as she is, was really moving," McCoy said. "The words and language and patterns [Kevin Moore] used to describe the treatment of Freddie Gray made me hurt to listen to."

Following the performance, Smith sat down for a conversation with the Billie Holiday Center's founding director, Lawrence Jackson. Jackson created the lecture in honor of Bentley, a childhood friend who Jackson says believed that Baltimore has the power to become its best self, and who was murdered in 1989. With both the center and the event, Jackson wants to celebrate Baltimore, its people, and their creations, artistic and otherwise.

"Our collaboration with the BMA generally, but in the work of Anna Deavere Smith in particular, emphasizes the profundity and quotidian brilliance of Baltimore artistic performance with a deep investment in Black history and culture," said Jackson, Bloomberg Distinguished Professor of English and History. "At the Billie Holiday Center for Liberation Arts, we want to create fora for local audiences of diverse backgrounds to apprise the energetic beauty and wisdom of our indigenous legacy, from the idiom and cadence of native speech to the transformative work in civil and human rights that has emanated from this city. Smith's singular gift to us left us elevated, inspired, and newly informed about our common heritage, our common woe, and our common responsibility."

The event's theme had been "Glimpses of Baltimore in Change," an homage to life and education in Baltimore, highlighting the transformation from segregation to desegregation.

"On the one hand, a lot hasn't changed, and the problem of the distance that we keep from each other in racial terms, a combination of choice and structural circumstance, still very much characterizes the city," Amen said. "And at the same time, Smith was also making a point that Black Baltimoreans are always finding ways of making joy and community on their own terms despite it, and that is also part of the richness of the city. She was trying to emphasize a message of interminable creativity that is here in part because people's backs are pressed against the wall."

As Amen reflected on the evening's echoes and the ongoing dreams the center has for the city, there was not much space between the two, or the way both aim to uplift through art and joy.

"I think the point of Smith rounding out her performance with the John Lewis stories was to leave us with a message of hope in all of this," she said, "and that if we are to get to where we'd like for the city to be—which is a place of opportunity and safety for everybody—we have to do a kind of spiritual work at the individual and collective level, so that we can really see each other's humanity."