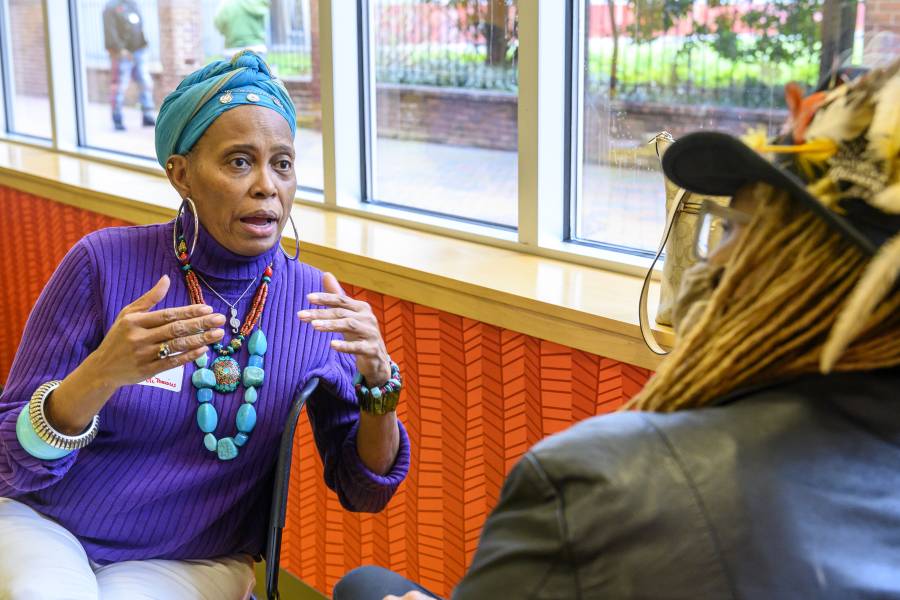 Family histories, told through generations and sometimes about long-gone ancestors, form a meaningful connection between an individual and where they come from. That familial and personal approach to history can be leveraged to engage a broader audience—storytelling can connect people across divides and give a fuller picture of the past while also informing the present.

In that vein, a series of oral history workshops arose, providing Baltimore residents with the agency and resources to record and preserve their stories, with a focus on the stories of Black residents. The Doing Oral History series of workshops, held between April 2 and April 23, focused on three key aspects of oral history: project planning, interviewing, and the transcription and mobilization of stories.

The workshops were a collaborative citywide effort, spearheaded by Baltimore Speaks, a network of local oral historians, and the Mellon-funded Inheritance Baltimore initiative, a reparations program that provides humanities education and arts-based public engagement among the Black communities of the city. Composed of three Johns Hopkins units—the Billie Holiday Center for Liberation Arts, Sheridan Libraries Special Collections, and the Program in Racism, Immigration, and Citizenship—and in partnership with citywide organizations, as well as the University of Baltimore, the program aims to provide resources to the community to build an infrastructure to support and preserve its history.

Joseph Plaster, a member of the planning group and director of the Winston Tabb Special Collections Research Center at the Sheridan Libraries, says that the oral history planning group enlists fellow Baltimoreans as partners in research, rather than objects of study. Through these partnerships with the community, Plaster says he is hopeful that Inheritance Baltimore can provide residents with the tools they need to preserve unrecorded stories, and that the group can learn from the workshop participants.

"Baltimore is a majority Black city with a significant African American history, but what has been preserved has often ignored Black voices," Plaster says. "There is this pressing need to document these stories and incorporate them into more comprehensive narratives about the city, and to develop new ways to collaboratively research that history and care for each other's stories."

Traditionally, the written word dominates documented history. Tonika Berkley, Africana archivist at the Sheridan Libraries, says she has worked in archives and repositories where the written word is treated "like law," and yet it has neglected to tell everyone's stories, noting an example of the history of enslaved Africans in Maryland. Such stories were passed down only through oral storytelling, highlighting the importance of documenting oral history. 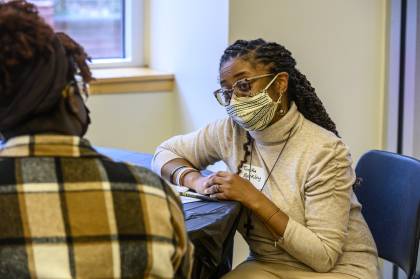 "It's really important that we be able to hold space for [oral history] as it's just as important as the written record," Berkley says. "In some cases, it's even more important because it can be used to challenge what we know or what's been documented."

In providing the workshops, the planning group divided the series into three seminars. The first featured a keynote address by Kelly Elaine Navies, a museum specialist in oral history at the Smithsonian National Museum of African American History and Culture. The workshop facilitators offered resources to help community members determine the focus of an oral history project, gather resources and equipment, and get support from community members. Berkley, one of the workshop facilitators, says the group tried to meet people where they were, using materials they could easily access; for example, if an individual had only a cellphone, the group provided resources to conduct interviews using only a cellphone.

Angela Koukoui, co-director of the cross-institutional Community Archives Program between Hopkins and the University of Baltimore, hosted all three workshops. The second workshop, she says, focused on the art and craft of interviewing and featured Linda Shopes, an independent oral historian with Baltimore Speaks. The workshop facilitators offered best practices for interviewing, including interview skills and determining a narrative arc through an interview. The workshop included a 30-minute exercise where participants interviewed each other, allowing participants to hone their interview style and technique.

Because the workshops built on one another, participants not only learned from the facilitators but also formed a sort of cohort with each other—a result Koukoui said led to an emotional experience for her.

"What we wanted was [for] people to get engaged in this, but that wasn't a guarantee," Koukoui says. "People are engaged. People are enlightened from each other's stories. Having the investment of the community wanting to learn about this has been an overall success." 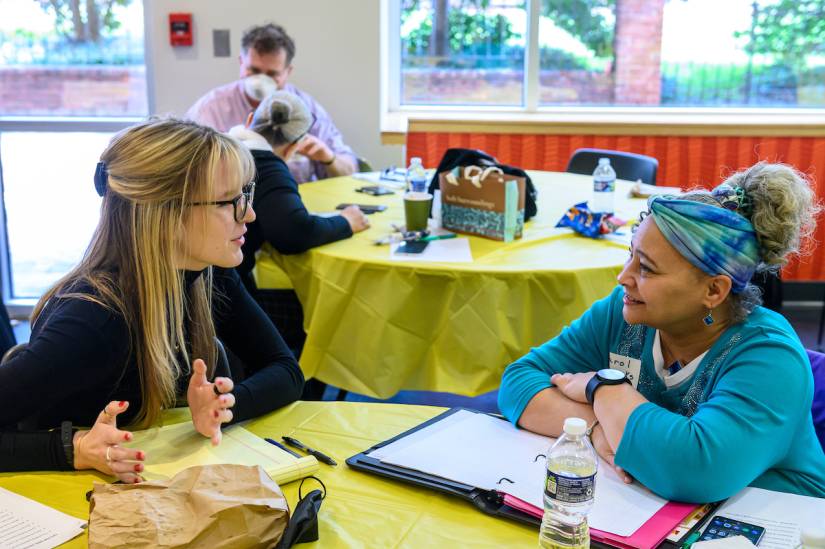 Image caption: Workshop participants interviewed each other to hone their skills at the April 9 workshop, held at the Reginald F. Lewis Museum

Workshop participants included individuals working on personal stories, as well as representatives from a number of community organizations, including the Algebra Project, a youth education and advocacy program. Adult representatives from the organization attended the workshops in hopes that they could train the young people in the organization to collect oral histories about Black politics in Baltimore and use those stories to inform their own programming and political organizing. The Peale Center, as well, had representatives at the workshops to bolster their new initiative called the Proximity Project, which will include a walking tour of Baltimore focused on civil rights and social justice in the city. And Koukoui's own dance teacher, whom she hadn't seen in 30 years, attended the workshops, reconnecting her with her teacher through a common goal.

There are a multitude of applications for oral history, but at the root of all the possibilities, there is a common goal of connection and information. Plaster, Berkley, and Koukoui all hope to see the efforts to provide oral history resources expand beyond these workshops. The group has plans to continue conducting oral history projects throughout the city, including at the Cherry Hill Festival on July 4, and oral history will remain a focal point of Inheritance Baltimore moving forward.

"We need to save these stories so that we can keep validating and letting people know we are here," Koukoui says. "These are things that we have done. These are the lives that we have experienced, and they are of value like everybody else's."