Kenrad E. Nelson, a professor of epidemiology and internationally recognized AIDS expert who spent nearly four decades on the Johns Hopkins faculty, died April 21 at the age of 89. In an email announcing his death and paying tribute to his memory Tuesday, Bloomberg School of Public Health Dean Ellen MacKenzie honored Nelson's "stellar record as a researcher, teacher, and mentor."

"Ken was a consummate educator and colleague and was known for being an encyclopedia of infectious disease. He travelled the world to chase down outbreaks and better understand them. He was tireless, joyful, and earnest in his work and deeply invested in saving lives," MacKenzie wrote. 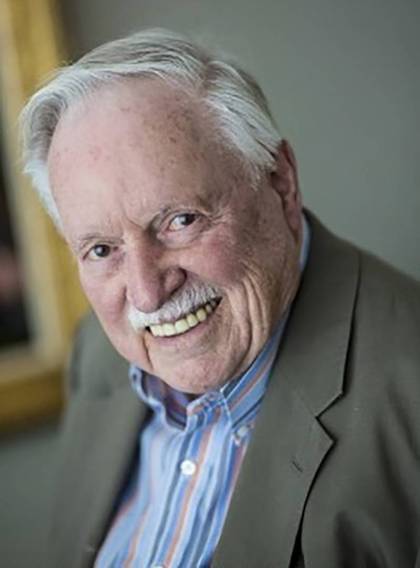 A native of Illinois, Nelson received his bachelor's degree from Depauw University in 1954 and an MD from Northwestern University Medical School in 1958. He completed an internship and residency in internal medicine at Cook County Hospital in Chicago, serving as chief resident in his final year. For 20 years, he served as an infectious disease consultant to the West Side Veterans Administration Hospital in Chicago and an attending physician at Cook County Hospital, and he served as a faculty member in the Department of Preventive Medicine and Community Health at the University of Illinois Medical Center and the Department of Epidemiology at the University of Illinois at Chicago School of Public Health.

He also shared his expertise with community organizations and public health authorities across the country and around the world at that time. He joined the Epidemic Intelligence Service of the U.S. Centers for Disease Control and Prevention, where he served as a medical epidemiologist for the Washington State Department of Health. He led his local Citizens Committee for Human Rights, a mental health watchdog group, and served as a consultant to the Holmes County, Mississippi, Research Program in the early 1970s. In 1973, as a visiting professor at Chiang Mai University in Thailand, he began the HIV and hepatitis E research that would bring him fame in the realm of international epidemiology. He would later advise a collaborative project among the Republic of Georgia's Ministry of Health, the CDC, and Gilead Sciences to eliminate hepatitis C.

Nelson joined the Johns Hopkins faculty in 1986 as a full professor in the Department of Epidemiology with joint appointments in International Health and the School of Medicine's Department of Medicine. He was an early investigator of HIV in blood donors and recipients and, with David Vlahov, co-investigator on a grant that would revolutionize AIDS research, The natural history of HIV infections in injection drug users in Baltimore: The ALIVE study. He spent 36 years at Johns Hopkins, including 10 years as director of the Department of Epidemiology Division of Infectious Diseases at the height of the AIDS epidemic. He advised 42 doctoral and 18 master's students.

"Ken was a consummate educator and colleague and was known for being an encyclopedia of infectious disease. He travelled the world to chase down outbreaks and better understand them."
Ellen MacKenzie
Dean, Bloomberg School of Public Health

Nelson served as a grant reviewer and consultant on topics including cancer epidemiology, molecular virology, translational medicine, diabetes, and kidney disease for the National Institutes of Health, the Food and Drug Administration, and the U.S. Civilian Research and Development Foundation. He was an elected fellow of the Infectious Diseases Society of America, American Epidemiological Society, and American Association for the Advancement of Science. He served as associate editor at the journals Epidemiology, Interdisciplinary Perspectives on Infectious Diseases, Journal of Drug Issues, and the American Journal of Epidemiology.

Nelson authored more than 500 articles and book chapters and was co-editor of the textbook Infectious Diseases Epidemiology: Theory and Practice. He was elected president of the American Epidemiological Society and received a Recognition Medal from the U.S. Civilian Research and Development Foundation.

"If you knew Ken, you knew how passionate he was about everything—when he spoke of his children's accomplishments, he was often moved to tears," MacKenzie wrote.

Nelson is survived by his wife, Karen, with whom he recently celebrated 60 years of marriage; five children; and several grandchildren.