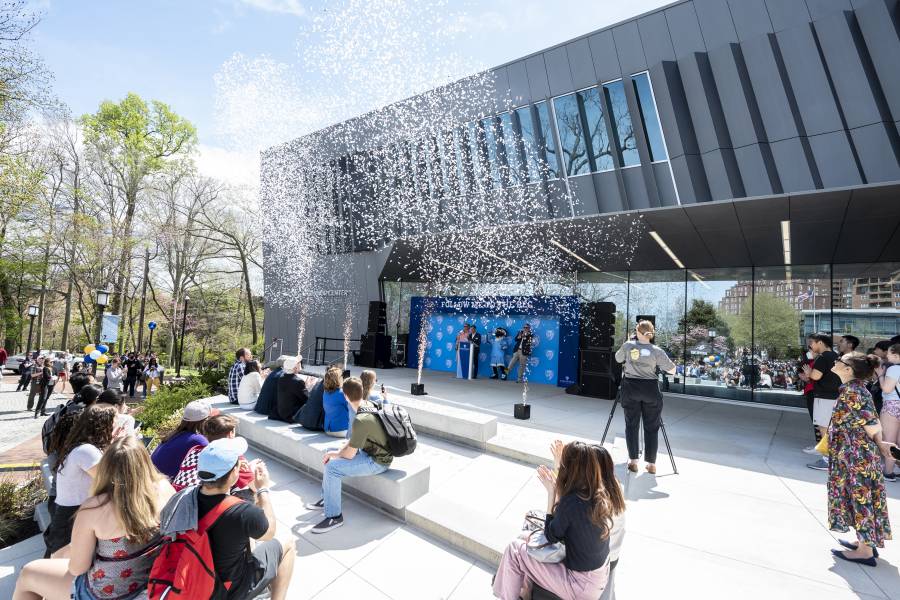 On a picture-perfect spring day, students gathered outside of "the Rec" to mark the rededication of the Ralph S. O'Connor Center for Recreation and Well-Being and to celebrate the life and legacy of "quintessential Blue Jay" Ralph O'Connor.

O'Connor, who died in 2018 at age 92, was a member of the Class of 1951, a trustee emeritus, and a lifelong supporter of Johns Hopkins. His generosity spanned the institution, including the lead gift for the Homewood campus recreation center that opened in 2002 and was renovated in 2021, support for financial aid, endowed faculty chairs, athletics, public art, awards for teams of undergraduate entrepreneurs, and the recently established Ralph O'Connor Sustainable Energy Institute, or ROSEI for short.

In his remarks for the occasion, President Ron Daniels noted Ralph's loyalty to his alma mater and recounted a story of a campus visit that found Ralph and his wife, Becky, sharing a golf cart ride across campus with a pair of students who had flagged them down for a ride. The students were enthusiastic about the then-new rec center but never learned the identity of their campus traveling companions.

"With his characteristic humility and mischievous sense of humor, Ralph never revealed himself as the guy whose name was on the building," Daniels said. "But that was pure Ralph. Ralph was happiest not when he was in the limelight, but when he was working behind the scenes to give his fellow Blue Jays the resources they need to live full, flourishing lives and to pursue their highest aspirations."