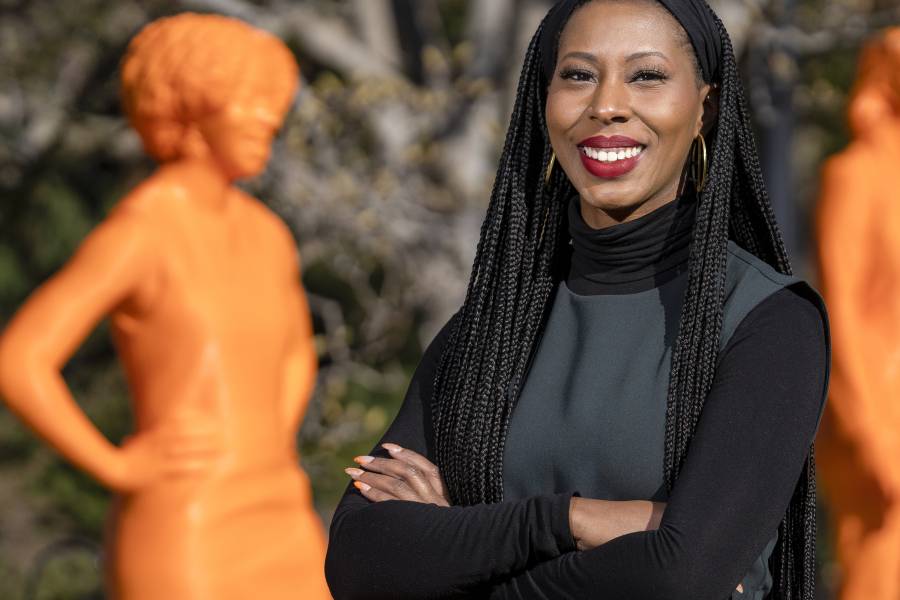 On a sunny March morning in Washington, D.C., Ciara Sivels chatted with a young girl about her doctoral research at the University of Michigan. Now working at the Johns Hopkins Applied Physics Laboratory, Sivels was the first Black woman to earn a PhD from Michigan in nuclear engineering.

But on this day, Sivels knelt to meet the young girl's eye. She explained what she studied, how she tried to determine where radiation was coming from, and what she does now—examining how radiation affects different materials.

Sivels carried on this conversation in the shadow of a life-size 3D-printed statue of herself.

"That sounds cool!" the girl told her, glancing up at the statue as Sivels assured her it was, indeed, cool. "You're the awesomest person I've ever met."

"Seeing young girls, especially young Black girls, and having them tell me 'It means so much to us to see you here,' was just so humbling."
Ciara Sivels
Nuclear engineer, Johns Hopkins Applied Physics Laboratory

It was one of hundreds of touching exchanges Sivels had with interested visitors—from the very young to the more seasoned—on the first weekend of Women's History Month. As one of 120 women in STEM to be honored with a statue on the National Mall, Sivels is part of the #IfThenSheCan exhibit, the Smithsonian's Women's Futures Month centerpiece.

The Smithsonian says the exhibit is the largest collection of statues of women ever assembled together, and the figures "represent a diverse coalition of contemporary women STEM innovators and role models leading a variety of fields, from protecting wildlife, discovering galaxies, building YouTube's platform, to trying to cure cancer." Each statue includes a plaque that says who the woman is and a QR code that can be scanned to learn her backstory.

"I don't think the significance of this exhibit really hit me until the opening weekend and having these conversations," Sivels said, noting she was fortunate to chat personally with Lonnie Bunch, the first African American and first historian to lead the Smithsonian, and Rosie Rios, whose initial study of the number of women statues in the top 10 most populous U.S. cities spurred the IF/THEN statue initiative. "Seeing young girls, especially young Black girls, and having them tell me 'It means so much to us to see you here,' was just so humbling." 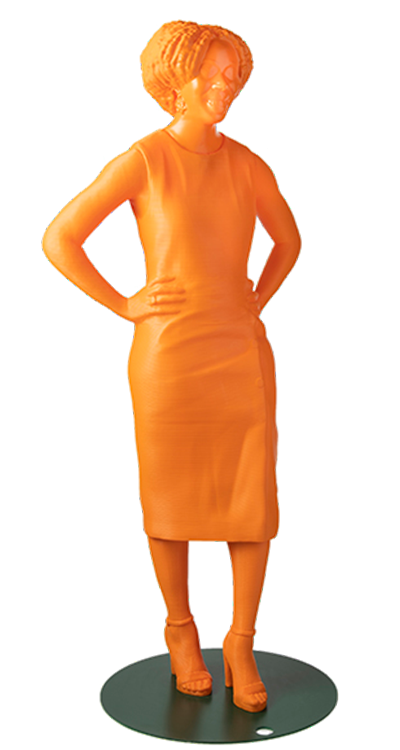 Sivels spends her days working on some of the nation's toughest challenges as a nuclear engineer in APL's Air and Missile Defense Sector. However, she's also a fierce STEM advocate. Her participation in this first-of-its-kind exhibit is part of her role in the American Association for the Advancement of Science IF/THEN Ambassadors program, an initiative of Lyda Hill Philanthropies designed to highlight women in science, technology, engineering, and mathematics fields and open the eyes of middle school-aged girls to STEM careers. To participate in the IF/THEN statue initiative, Sivels had her body scanned months ago so it could be printed.

"If you think about the Smithsonian, it's always about history," Sivels said. "This women's futures exhibit is unique in that it's a first of its kind. We're not focusing on history; we're looking at the future. To have statues of people who are still here and be able to follow their trajectory, it's a very unique exhibit."

Sivels' statue will remain on display inside the National Air and Space Museum through this weekend.